There is much content to discover in the next updates; so much that a few articles would still only touch the surface of that amazing content.

Despite working on it every single day, a few events - including great ones, such as recruitments in progress, EXODE growing up and up and new good guys in our community - have taken up some time.

And new events, such as an interview, are coming up too!

So captains, have a seat, a relaxing time, and let's roll and join 2325 again for hot news! 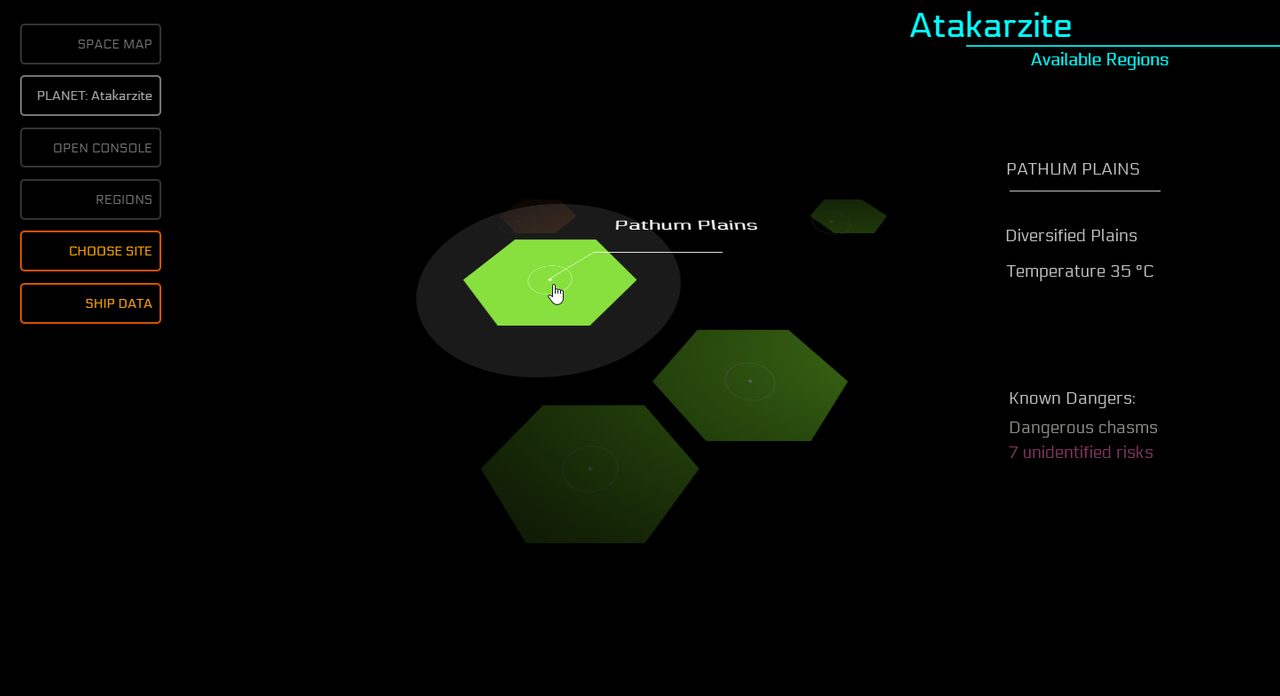 Several concepts implemented in next update

I determine the scope of an update early, but with all the layers mentioned in EXODE and awaiting release there are a few things which also "insert themselves".

It happens actually when an update is not ready "yet" ; in that case, very often the structure expands and includes next week's scope in it, and then begins the next crunch time. 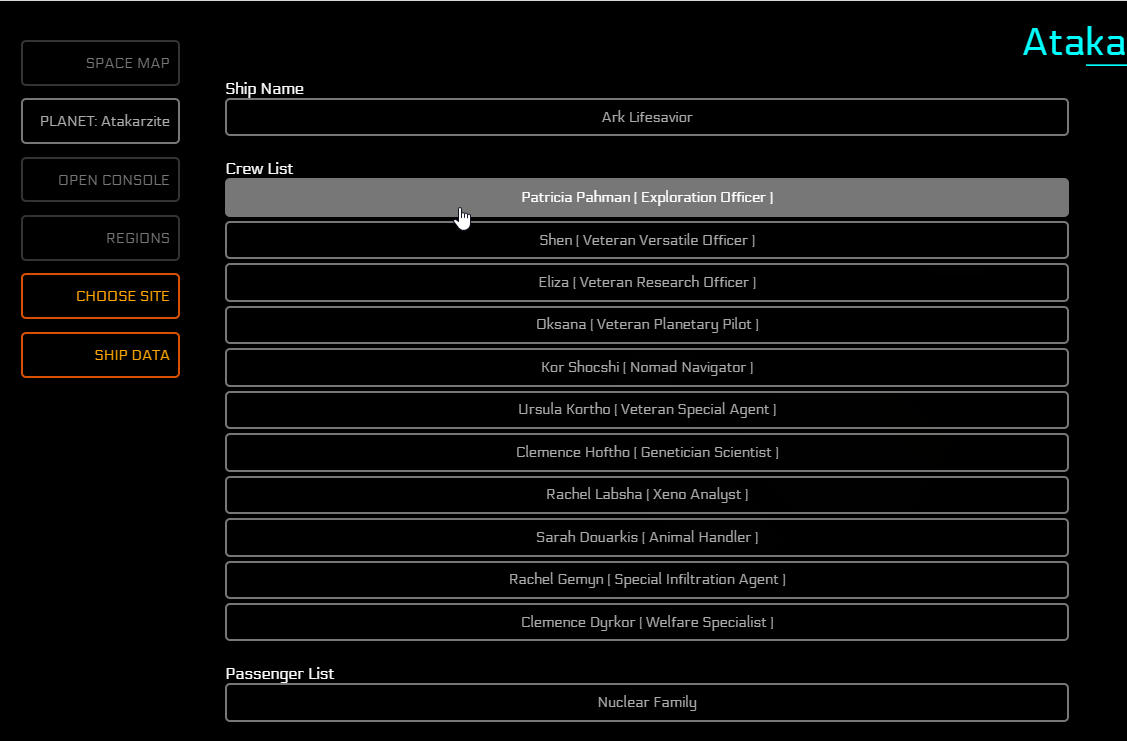 Next update is actually amazing because that's when you'll get to play with your Away Teams.

Why do you want to send an Away Team?

Because that's where you'll find food, and collect precious wildlife, ore and plants to research further in the next steps.

Away Teams is your first participation into EXODE 4X: eXplore, eXpand, eXploit, eXterminate.
To be honest, the meaning of this acronym is scary.
Your planet may be actually "more dangerous than you are".

But the idea is that yes, this is where you will explore your planet, expand your controlled area and exploit its resources. And hopefully avoid being exterminated!

How to make an Away Team

Making an Away Team is as simple as clicking on a list of citizens, and dropping roles on them.

We are implementing a drag and drop UI for it.
You can even assign several roles to a single character.
The UI below is just a draft, we'll work on it a bit more.

Once ready, you can pick a vehicle, click on "Send away team", and select a target sector! 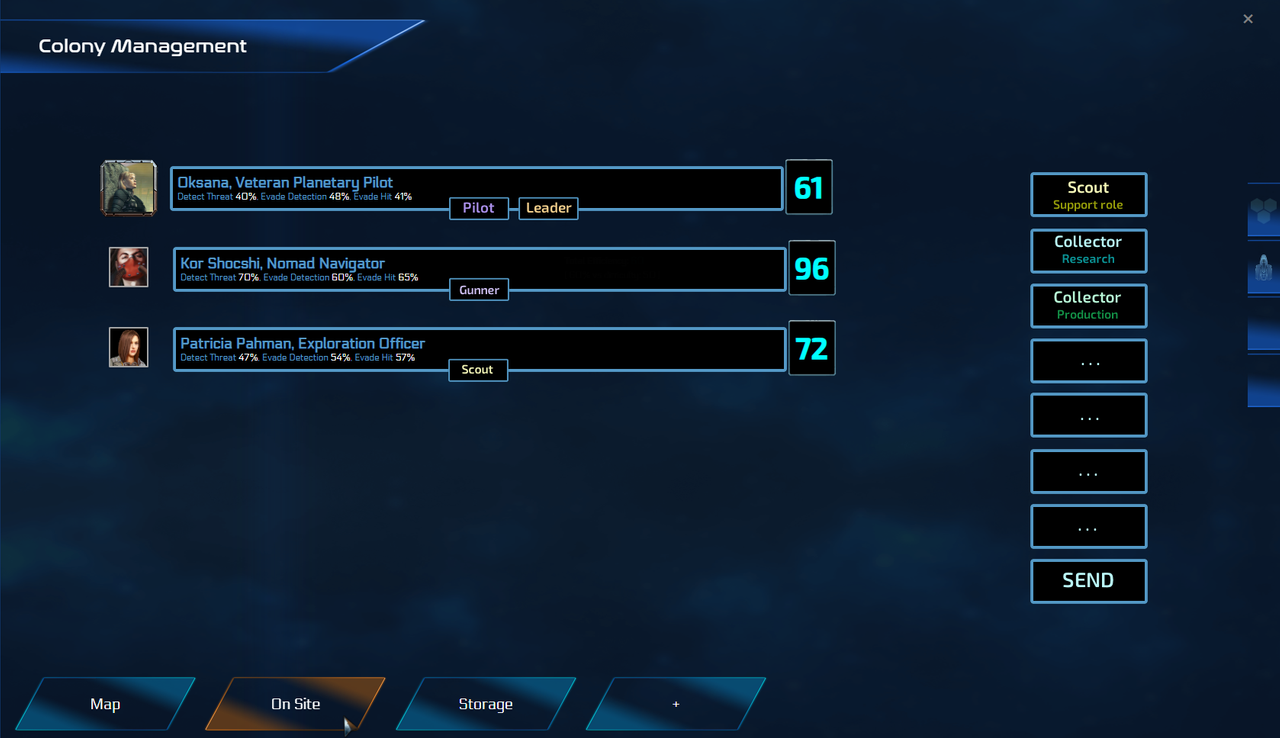 There are many possible roles, so much that I actually decided that players could unlock some of them later.

Some rules to remember:

How to unlock more Roles for your Away Teams

Because it is EXODE and we like to try new ideas, there is even more fun:

OK, this one is a big concept.
You should pause a bit to acknowledge it.

Also, because it has sense and fun, alliances can also end up setting up their "alliance doctrines", with bonus effects, which could also be "their special team role". But that's for later ;)

But how fun does that sound to you?
Feel free to comment!

The point is, we are implementing a very dynamic layer even around team roles. Fortunately, we'll get a tutorial and step by step learning process on research, so that people don't get lost.

Also, it's not developed yet.
Testing research is not yet part of this update!

But events definitely are!

Your Away Teams will be exposed to our Travel Events engine, and also, to events once on the site. 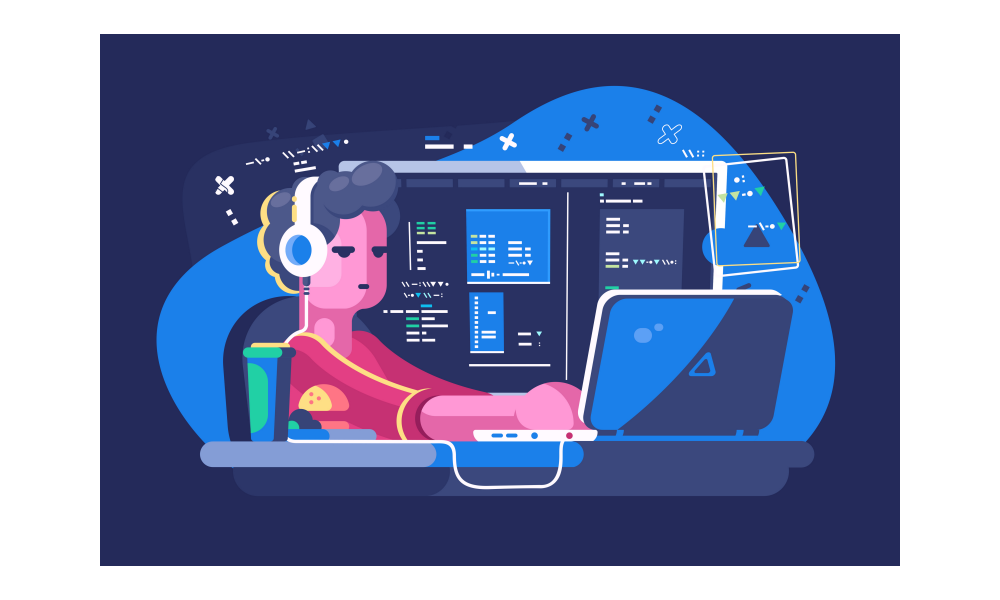 Because of this content, numerous good events this month, some background maintenance from an increased activity in EXODE, and several added responsibilities (such as a vaccine shot, and another coming in September) this nice update is still being set up.

I also expect to get some slowdowns because I start scouting for recruits.

As you can expect also, this content can invite a lot of finetuning and adjustment.

I would like to get it out before August 31st, which is the next deadline.
It's still a tough one to get, but I am highly motivated to get there with enough polish.

A decision is also being taken between adding some research content, to have a more interesting game loop, or just keeping it at Away Teams and events. Feel free to share your opinion about it below! adding research could "risk" a few more days, which is normal, but can add some excitement to the game formula as well.

I understand I take a lot from our captains patience with every release and attempt at reaching deadlines, but that's really for the good of our game. 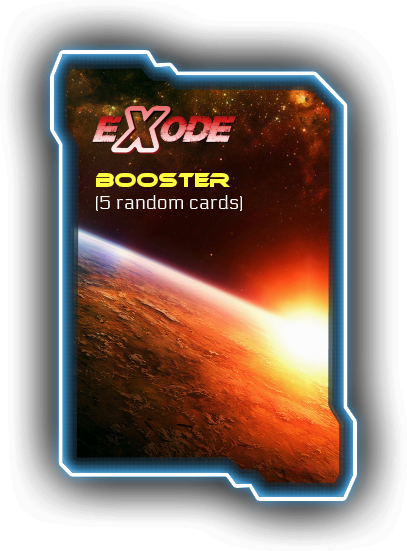 Other news in EXODE: get your booster packs!

EXODE is having a big growth lately, and people are rushing at our last booster packs.
At the moment players have purchased 37 000 booster packs.

Maybe from that number, you already are proud of what you have in your collection, understanding you acquired some of EXODE alpha content. The team will work to give it incredibly high value in beta.

Initially in alpha 200k boosters were planned, but we will actually burn a big lot of them to ensure scarcity. We had a rough idea to allow 80 000 boosters, and to set aside 30k for WAX sale. This was unannounced yet, so we are just sharing the unofficial numbers.

If we keep these numbers, only 13k boosters are left.
Scary!

Because of that, we may still adjust these numbers differently.

Our final numbers will be announced end August. If we decide on a number that is already attained, then we will still give a few 'last days', such as 5 to 10 days, days during which we will still accept purchases. But the bottomline is, they will certainly run out before the WAX sale itself!

We have been invited to an interview on August 31st.

We are thrilled, immensely thrilled even, because there is so much to say about EXODE and crypto!

This is a big year from crypto gaming and for HIVE, and we think all actors need to speak it, share opinions, values and vision, and also aim at making the crypto gaming scene better and stronger.

There will be another post to detail where to access this interview.
But keep August 31st in mind for this event too!

That's all pilots!
We are keeping a lot more events for next posts!