3 weeks ago we announced the details of our next update!

Called the Big Scanning Update (... ok, this could have used a better name! :D ) it was more serious than its name implies, adding a new presentation system and new interactions available to our players.

Now this update grew up and sounds more like a "full EXODE expansion" just before we enter our colonization STEP TWO, so it becomes important to know everything about it.

Some of it is shared in this post today; there will be another post about our ruleset and crew roles in a few days when it comes out.

Also, important information: as soon as this update is out, your planet NFT bonus will be locked!

And still about ownership and assets: WAX sale is when we will stop proposing alpha boosters and end access to many of our 190+ unique cards. But there are updates related to this, as we want EXODE to be easier of access and updated before our WAX sale.

The new information here is that: to avoid delaying it further with everything we work on, we would shut down access to EXODE alpha boosters from shop "before WAX sale happens", effectively ending 'booster alpha collection' aside from the number reserved for WAX.

As time goes on, we want captains to know that we are still set for this important moment; and that 'technical points' will not delay it for too long. Value comes from features, but also from scarcity!

Now let's get into more info!
Get your eyes ready... and ENGAGE! 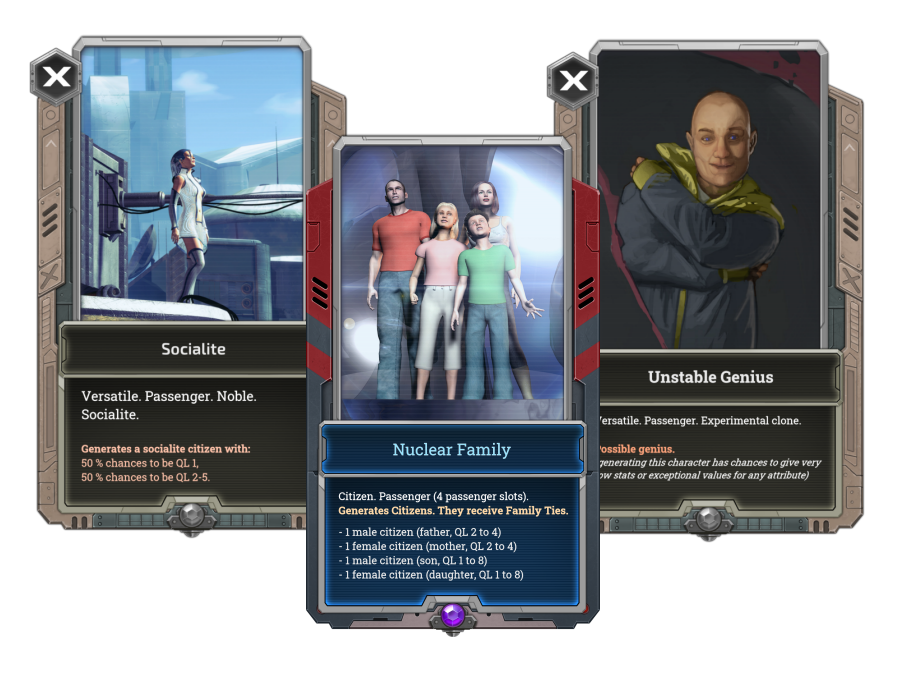 It has been a little more than three weeks since our last major announcement.
Let's review what happened!
.

This week was one of the most important developments for colonization, maturing all kind of interactions between characters, skills, assignments and events.

The first week saw a major update to our crew roles structure and API services culminating with the write-up of our first exposed ruleset, which will be fully detailed in a next post.

I wanted to get the full ruleset explained in this post, but the update changelog takes a lot of space already ;)

We believe exposing the ruleset will be the base for a lot of useful third party tools, such as a way to test different cards on all crew roles, because everything is there.

As server was happily crunching crew role events after our first week, the second week was all about front UI and the new selection and task presentation. While testing, the concept already got upgraded, so this is now the second version of it.

For this second version we had to replace the "letter grade objective" with another: clearer information on crew efficiency and game effects.

The new list has best crew members at the top, as proposed before. This is an important improvement (we can even call that a fix, as it's so much more useful that way!) over default crew lists.

We implemented and then dropped the letter grade (but kept it as an option), because many players will see several lines with a big "C" grade instead of 42, 48 and 49 for instance, and this was actually diminishing the individual importance and difference of your characters.

Instead, we prefer to share the difference between a 42, and a 49 or more, in more details.

We added something else this week, which we consider at least as important. This second week culminated with an important addition: a new tooltip system about events and crew roles.

This is used to introduce our new ruleset effects.

It is also synchronized with our ruleset file and our translation files.

This will allow to scale easily in content! but also in internationalization later. 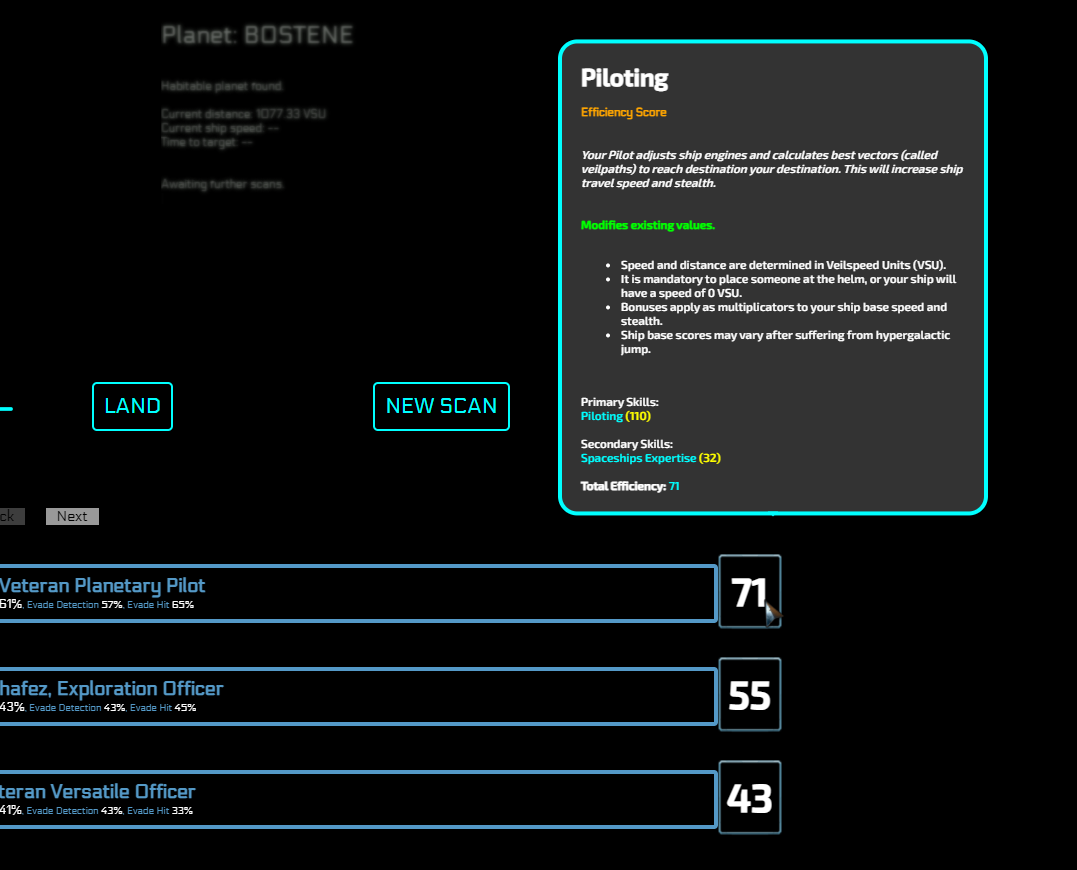 Even our events are not left behind; they are also detailed and explained when hovering the mouse, like this: 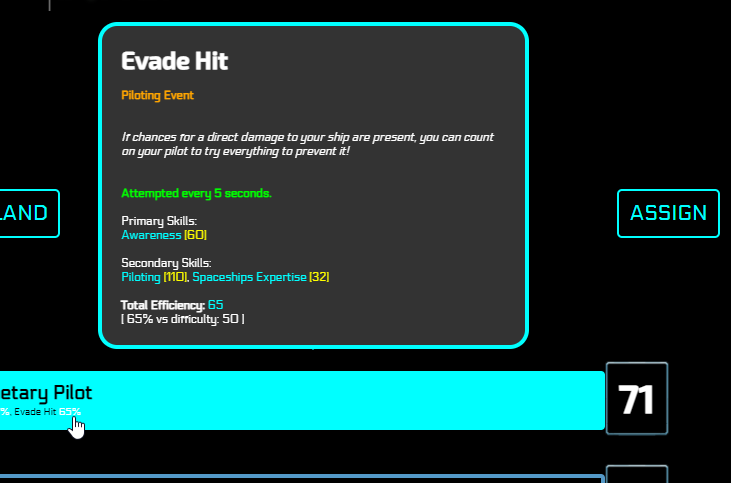 This ended up as one of these "milestones" moment where we update our way of "managing control and simulation" in the game. This could be another important time for the entirety of EXODE future.

Here we do our best to add more explanations, more effects and events proposed to front view; without actually, we hope, hindering UI or player impressions.

At the end of the second week we were approaching our initial release date!

Yes, I know: I did not share any date. But I wanted our scanning update to be released in June and I think everyone felt it too. And this is because I want to make us play colonization. And Bosslindos wants it as early as possibly too. So this was crunch time again, although crunch time actually started a few days before.

During this week I added the task buttons, the report buttons and activated our 8 new crew roles and the revised version of the Planet Scan Officer. A lot was achieved!

As a note, we only had 2 crew roles before and previous UI was not really easy with two. We were getting five times that number while also adding events, reports and more information.

Everything was added successfully... or so ;-) but I am still handling the consequences of all these new additions. (or maybe, of all this crunch time! haha!)

The full changelog is here: please note this is still the "current" changelog in developer version, I guess a few more things will be added in the next days.

Scanning Update Changelog (some of it)

Such repairs are possible because your ship is living on borrowed time; it is still in enough capacity with a working computer. Once landed (the last "hit" on your ship) these quick repairs will no longer be available, until you fix some other parts of your ship.

Other roles are active:

Other crew roles will be detailed in a later post; we revealed more about engineer as it was important to understand ship damage.

I always expect to cover a lot of ground on the repeated rushes in EXODE development.

Very often I am then disappointed by "our body host", the organic frame needing sleep times.

But recent delays were actually because of the ruleset revisions, crew list second version and tooltip upgrades (and of course the somewhat important changelog!).

As of now ruleset, API, crew lists and task lists are working, this is the good part. And new crew roles too (though some things are still to be tested). Which is the even better part. Yet I am still into the "last 20%" which always takes some time.

I am working on reports at the moment. I also would like to work on citizen generation, and reveal generated citizens (such as those from Science Student, Nuclear Family cards and some others) in your citizen report. What is fun, is that adding generated citizens and reviewing them is also useful to colonization. As you'll manage these citizens!

You may check our Deck Expert tool to find out more about these cards (you can type "generate" in the search input).

Once the citizen generation program is added, then some fixes will be due, then the update will be released!

Let's get something out: I am not satisfied with our current date! I expected to have all of it done one week ago. Yet even if Fixolindos literally lives on crunch time, I guess Bosslindos has "to cut him some slack"... ;-) especially as more things got added.

As disappointed as I always am with dates (even more with upgrading things instead of adding our new scene) there is a very positive note: I am very satisfied with how things are looking now.

This puts more game elements"into player scope", which is extremely important ("adamantly important", actually), because EXODE is all about playing the fine line between player control and game simulation. And this update is all about ending into that sweet spot.

Scanning is a moment which can end as "I landed successfully!" but just as well as "game over!" as you are toasted in space, so giving us tools to better address "what makes the first outcome happen, and not the second one" is very important.

More importantly for EXODE development this update tests thousands of code lines related to colonization stuff. I think it is the proper way to test this part too, testing them in scanning, a scene we start to know well; it has a lot less harmful or with invisible consequences than testing them in colonization and having to enter every single planet and character to find what happened when.

This is because we are testing a ruleset, crew roles and events, and a new structure of it, along with "server refreshing client" about all of it, and all this part is working neatly for now and "in a scalable format".

Now, I have also to give some specifics about scanning:

And here is the hard news, I'll spend the required time on what is reused in colonization (active tasks, crew lists, reports) but, not on what is specific to scanning.

Also, we can't expect yet to have a lot of time invested in balancing all of the scanning scene though. It won't have balanced duration, balanced action times, balanced chances or proper feedback.

It will be released unbalanced.
And maybe even somewhat unpolished!

I'll accept the (temporary) damage of it in player experience, too, and that "some things will be improved later".

This is because I am all too eager to test our STEP TWO. We all are!

I am eager for that moment when the screen fades in, text appears as crew members recovers from landing, and the colony music starts again... (our EXODE music!).

There are a few "very expected dates" here in addition to colonization Step Two.

That's all for today, pilots!

Scanning is being updated only because we test some of our colonization code there. You read that well: it's our front and API version for STEP TWO which is being tested!

See you on next post for more information on "EXODE 101 - our ruleset explained!"