PSA: Do NOT be a Dickhead and Mass Mention or Tag People When Attempting to Gain Attention to a Post or to Call for Help... It's Almost Certain to be Taken Poorly by Most! 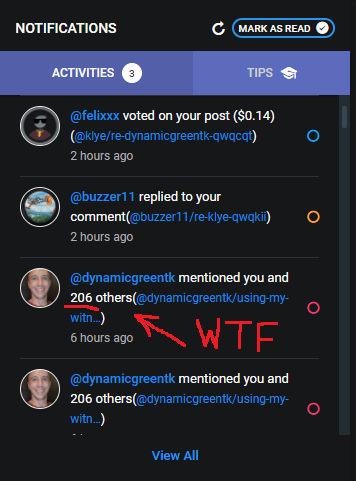 Alright, So Noticing a Disturbing Trend...

Recently, for whatever god forsaken reason, it seems that it has become fashionable or an acceptable trend for HIVE users on here to completely overuse / abuse large amounts of user name tagging with the "@" prefix. Now the tagging / mention function baked into the various front ends on HIVE is a great tool to have, allowing folks to summon or bring to attention the user "getting at'd" when a situation warrants it.. There simply put isn't a situation where you tagging any more than a handful of people is going to be viewed as acceptable, most times it's viewed as an annoyance.

However, when a user decides to take it on themselves to tag multiple, 25, 50, or even +200 users, often times including large numbers of HIVE witness names who run the infrastructure or develop the code here for whatever fucking reason. Be it by not knowing better, trying to be fucking annoying or simply not realizing that this type of behaviour is not only anti-social but disruptive to the community as a whole more than a couple times this week this has happened to me.. Generally if it's a newer user I'll politely inform them that mass tagging folks is frowned upon and that they are likely to face some flack in the form of nasty words being exchanged or flag nuked to varying degree.

What effectively happens by tagging so many users is not only do you attract the attention of people unfortunately included in your shitpost tag spam but often times folks will see that them and 200+ users were mentioned by a blogger and go over there, not even read the post and just downvote it on ground of being spammy or abusing mentions.. And frankly I do not blame them. Not only are the large number of users being mentioned akin to spam e-mail or whatever, but in like 98% of the time the excessively tagged users have nothing to do with the post topic.

( the "===" operator in this case means strictly equal to )
As mentioned briefly above if it's a first time offender of mass mentions I'll not bat an eye at giving them a friendly warning, as to instantly jump down someone's throat who may be a noob or not know better would be a shitty lead by example.. but to those who absolutely do know better and are utilizing mass mentions to harass and or spam folks here on HIVE I personally will be laying down flags on posts, not limited to the spammy post. As a community we need to make it clear what we as a whole are willing to accept, or alternatively take corrective actions against to ensure proper behaviour and mannerisms here within our HIVE community. I personally invite you to join me on my quest of flagging the shit out of people who are mass mention spamming. Thanks for reading!
klye(74)
hiveblogpsahive-helpmentionspamtag
klye74
via peakd
$ 9.99
125
H2
H3
H4
3 columns
2 columns
1 column
21 Comments