The Evolution of Hive: Hardfork 26 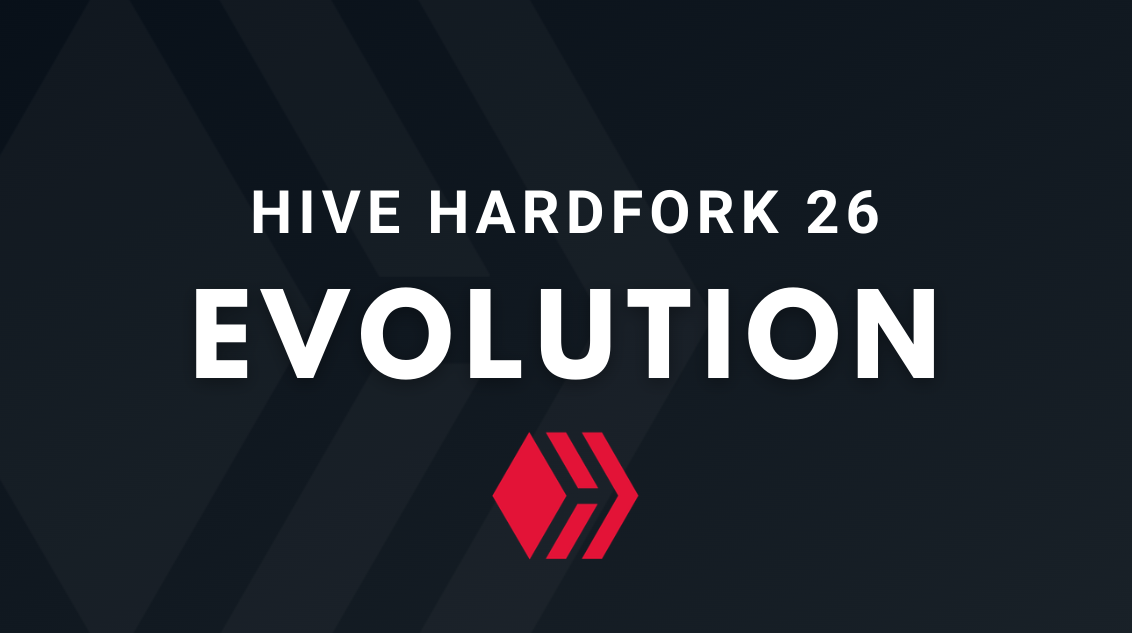 Hive is set to run a major protocol update, titled Evolution, on October 11th at 12:00 GMT. We normally run these updates once a year in order to apply changes and improvements which cannot be launched without a consensus-level upgrade.

For Creators and Curators

Curation restrictions of one vote per 3 seconds (per one block) are being lifted. You can vote as many times as you wish in the same block now. But remember, you are still limited by your RC! This is great for multi-curator accounts where curator votes may have conflicted due to timing.

Need to change your vote? No problem. There is no more vote edit penalty. You will still get curation on the new value of the vote, as if there was no edit at all.

Dust votes, predominant among new accounts without much stake, are now considered the same as regular votes. What does this mean? Right now, if you were to delete a comment it would need to have no votes on it. Otherwise it won't be deletable, only editable. With this change, comments that have a dust vote (and are deletable now) will no longer be such. In short, all votes count.

You may now update your keys twice per hour, not once. This change was made to allow for a safer procedure for changing your keys. This was especially important for the Ledger implementation by @engrave.

The HBD/Hive ratio prior to the HBD haircut will be changed from 10% to 30%, supporting further stability for HBD and preventing undue price fluctuation due to debt. This also acts as a security mechanism, preventing someone from exploiting the on-chain conversion system.

The new limits, raised from the previous 9%/10% limits, are 20%/30%. Meaning, HBD will stop being printed (or issued as part of content monetization) at the 20% soft limit and reach its hard limit at 30% of the market cap.

You can learn more about the HBD haircut here.

The way RCs are calculated will change to more accurately reflect the costs involved in supporting the blockchain. The RC cost for 'temporary' objects will be reduced while the cost for 'permanent' objects will increase. This will make for a more fair and balanced system. RC regeneration was also altered and unlike before, RCs can no longer go into the negative.

What's more expensive? Operations like claiming account credits, creating new accounts and issuing "custom_json" (JSON) transactions. While this may impact some dapps, it will also encourage optimization as the cost of a "custom_json" operation is now directly proportional to its size; meaning, reducing the content only to the essential elements will be a RC-saving measure.

RC delegation is finally here! Many dapp owners have long waited for this. RC delegation operations can be executed via the JSON "delegate_rc" function (requiring the parameters of 'from', 'delegatees', and 'max_rc'). These can be issued using the account Posting Key in order to limit account risk. A good overview of RC delegation can be found here.

The Simdjson library was added to validate all JSON operations, lowering the computation cost to validate them by 7x. It is a parsing tool that significantly speeds up json validation, allowing the blockchain to potentially process more and bigger custom_json operations per block.

For Investors and Witnesses

The much-awaited OBI, which positively contributes to the immutability and finality of blocks on the Hive blockchain, comes into effect this HF.

One-block Irreversibility (OBI) is a proposed protocol change whereby a block will be considered irreversible as soon as a sufficiently large super majority of the currently scheduled block producers vote that the block in question should become the next valid block in the blockchain. The goal of this protocol change is to enable most Hive transactions to become irreversible within a few hundred milliseconds (before a second block has even been produced, hence the name “One-block Irreversibility”).

You can read more here.

All witnesses are expected to be ready for the HF. If you're unsure how to update your witness please refer to this helpful guide.

There are some exciting changes for witnesses as well. Block logs may now remain compressed online and offline, saving valuable server space.

Several improvements have been added to the cli_wallet for power users including:

This is our third community-driven hardfork of the Hive blockchain protocol made possible by our tirelessly dedicated developers, witnesses and contributors. Myriad tests and updates have already taken place and we are all excited for the change-over.

Thank you for being part of the Evolution of Hive! 🐝