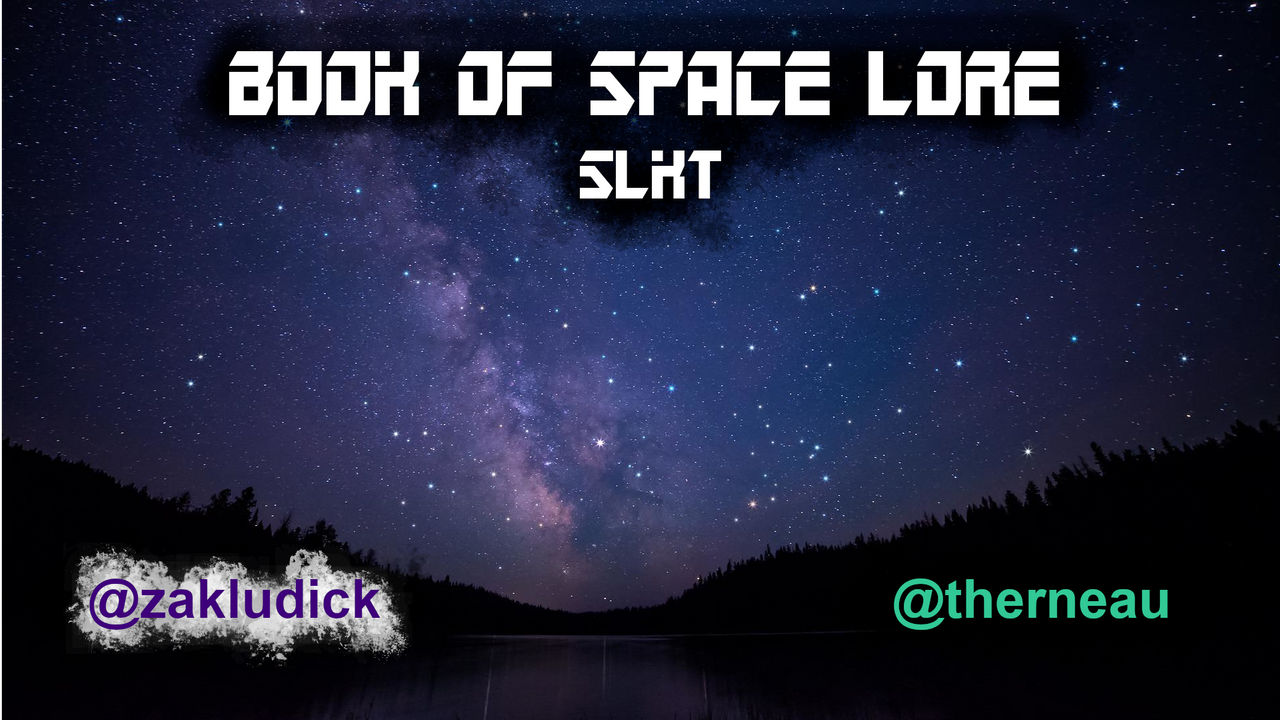 Almost 4 years ago @therneau wrote THIS addition to the Book of Space Lore universe. It started a story and unfortunately, the writing partner of that time went silent on Hive(and the platform that shall not be named). As a result, this potential story has laid fallow. (Never mind the 3 years @therneau and I were also AWOL from Hive, lol)

Now is the time this new story is revived! Also, it buries @therneau in backlog mwahahahaha! Three balls in the air and they are ALL in your court!

I am keeping the name, makes things easier.

I would suggest you read SLKT#1 first!

A party of soldiers and scientists travel through the jungle of Galladius 215, or Earth V2 as it was also called. They are nervous as other parties had gone missing on Galladius 214, Earth V1.

(Not much else info or background has been given to me by @therneau, time to freewrite from there onwards!)

Dr. Adendorff trudged along behing the Lieutenant. He was foremost amoung the scientists and it seemed right that he follow behind the leader of the soldiers.

Though the soldiers were there to protect them, the soldiers took complete command of their situation. That they were learned scientists and academics did not matter while the mission was underway. The soldiers treated them like any other asset that needed to be protected: Keeping them alive but not being very diplomatic about it.

The Doctor stared at the back of Frey, the soldier payed him no heed. The Lieutenant had put his pistol away and had his assault rifle in his hands, despite the weight. The commander did not want to take any chances.

His questions still burned in his brain. It was starting to feel as though the exorbitant amount of money the U.E.C was paying the Doctor and his colleagues was less and less of the good deal that they had thought it was.

"Scheisse." The Doctor swore as he stumbled down the path, he backpack weighing him down.

"I bet you still have questions." The Lieutenant said as he walked. "It would be great if we could work together and have no more delays."

"You are right." The Doctor puffed. "We cannot stay here. That little creature was not very scared of us, but wise. However..." He sucked in another breath.

"Yes?" The commanding soldier half turned as he walked. "I am sure you have come up to some sort of observation. I am sorry I cannot tell you anything. Especially not in front of everyone."

"Well, for one, this path was carved by an animal." The Doctor replied. "But it was not made by that little thing that came at us before. Though we are on a high gravity world, the speed and power that it posesses poses a serious threat to us. What then made these trails? I do not think the weapons that we have will be able to stop what made the trails."

"Let's just get to Pinnacle One before nightfall alright?" The Lieutenant said but kept a watchful eye on the tree line."

"So it's a nocturnal animal." The Doctor said.

"That's some wild guesswork." Frey replied. "Doctor Adendorff, right now we need to just focus on what is in front of us. We have around 2 hours left before we either confirm your theories or make it to safety. I for one do not really know. It must be strange for you scientists but in the military they only tell us as much as we need to know. Right now, I cannot tell you and if I did, I would only be allowed to tell you what I am told to tell you. Your guesswork is as much as I know about these things."

The Doctor became quiet after that. He knew that further prodding and poking would only anger the other man. The Lieutenant had likely made the rest of their party believe that he knew something rather than nothing, but that would have incited panic.

Dr. Adendorff was inclined to believe Lieutenant Frey. The man did not know anything about the creatures that roamed this planet. Not the small creature that had dashed towards them, nor the seemingly massive creatures that must have made the trail through the jungle they traveled on.

They were traveling up an incline. There was still plenty of sunlight left and it made the doctor feel heavy and sweaty. Nearly half of what they carried with them seemed to be water and he needed every drop. It was funny as they did not seem to need to stop for relief while they trudged along, all the water was expelled out of their skin.

"How hard does the rain fall in a world such as this?" One of the junior scientists asked.

The Doctor considered it for a moment when there was another boom and the sound of distant gunfire.

"Look! Smoke!" A soldier cried out.

The Lieutenant started running and the Doctor followed him up the hill. It was a grueling task and the Doctor huffed and puffed by the time he had caught up with the soldier.

In the distance they could see the walls of a massive compound but it was being torn into. Even at this distance, where the muzzle-flash of Assault Rifles were like pinpricks, the body of something massive and grey was mounting the wall and tearing it down.

"That's Pinnacle One." Lieutenant Frey said, an air of defeat in his voice. "That's supposed to be safety."

Right, off to a start again. There you go @therneau, 3 balls in your court! Hehe.

The Reader List:
If you would like to be tagged in every episode of Book of Space Lore SLKT, leave us a comment and get added in, miss nothing!

If, for any reason, you'd like to be removed from the list, you can mention that anytime.