Aspen And The Human Cub 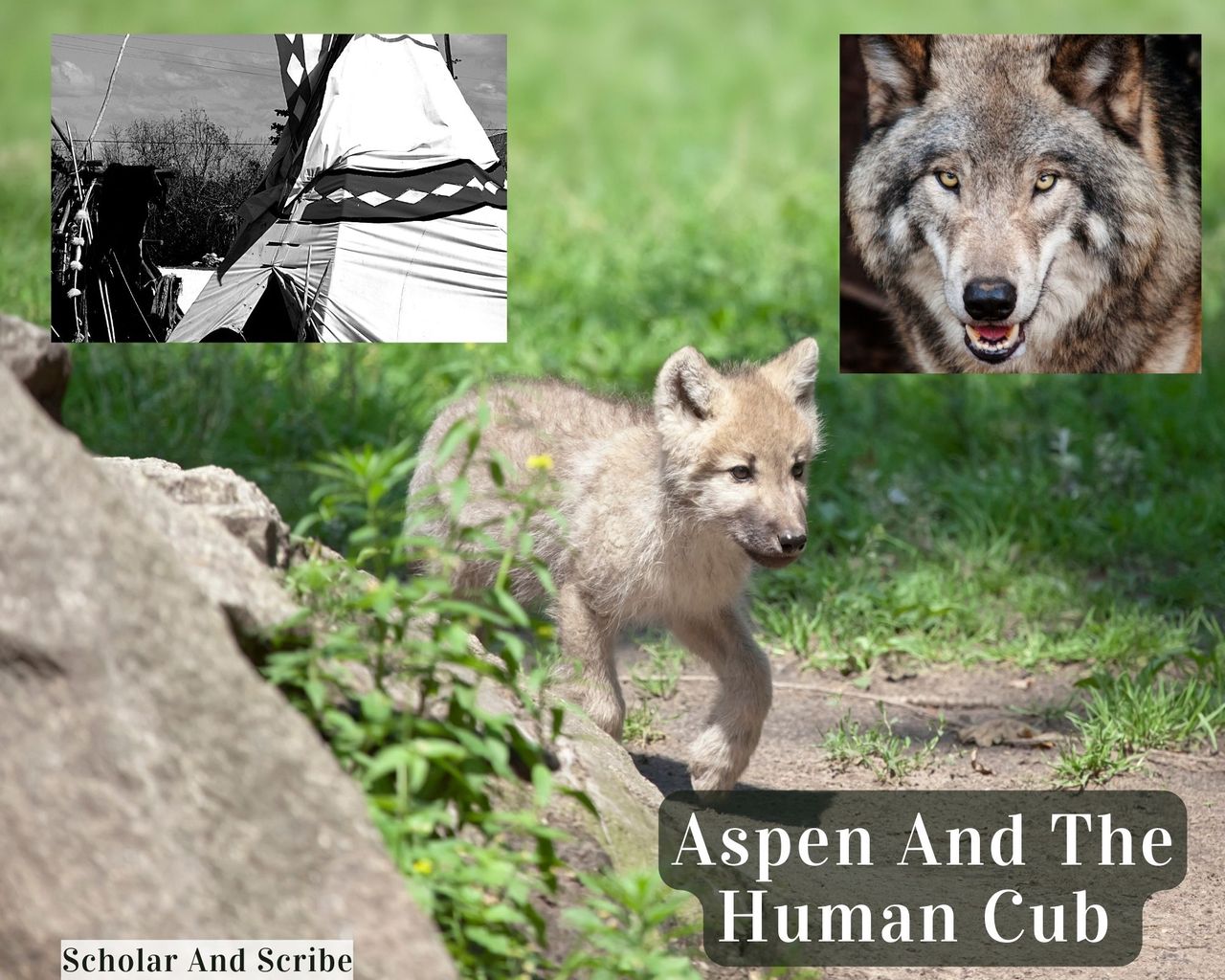 "They're so much like wolves! I want to go see the human cubs, Father. One of them played out in our meadow yesterday, and I made friends with it. But I had to hide when the big ones came looking. They smelled more scared than mad, but I didn't like them."

"I don't want you to like them, I want you to leave them alone! Even a little one is dangerous, Aspen. It can take hold of you, and force you to go back to its den."

"This one wouldn't, he was nice. He played tag just like another wolf, Father. Then we stretched out in the sun together." explained Aspen, as she lowered her eyes.

"I never want to hear of such foolishness again, Aspen. You will stay away from them - all of them!" growled the alpha wolf lowly, as his bright yellow eyes narrowed.

"Yes..." whimpered Aspen, lying down and rolling over to expose her belly in submission.

In a nearby village:

"Father, the cub isn't dangerous. We played like my friend Buri and I used to - when he was alive, I mean. We played tag in the meadow. I even laughed again. She's my friend."

"Where there's a cub, there's a pack. What if they came looking for her, and found you? You wouldn't be standing before me right now, Tukar." he replied, sadness and anger mixed together in his voice.

"You said wolves are our brothers and sisters. They don't attack us." Tukar argued.

"Yes, but when they think their young might be in danger, things could be very different. I don't want you going near that area again. And if you see any wolf, especially a little one, you stay away!" he exclaimed, making Tukar shudder, and take a step backwards.

"Little wolf... Here, little wolf." called a soft voice in the meadow. Aspen lifted her head. The voice barely carried to Sunning Ledge, but she heard it during a lull in the breeze.

Orders forgotten, the wolf cub crept away from her dozing family, careful not to make a sound. Soon she was bounding up to the child, who greeted her with outstretched arms.

"Oh, I knew you would come!" he exclaimed, tears running down his cheeks as she wriggled and kissed him.

Aspen didn't understand his language, but she knew he was happy and relieved to see her.

"I wonder, can you understand what I'm saying?" asked Aspen, tilting her head.

"This is the first place Father will look if he misses me. We need to go somewhere else." Tukar said, getting to his feet.

"I wonder what he said..." thought Aspen, as she followed the child to the edge of the meadow.

"Oh no, we can't go towards Sunning Ledge. Let's go to the creek instead." she suggested.

"I guess you can't understand me." she said sadly, slowly backing up. When she saw he was following, Aspen trotted slowly but steadily.

After several hours of splashing in the cool water, the youngsters sunned on the hot pebbles, enjoying the last rays of sunlight. Both fell asleep, exhausted from a full day of play.

"Hey... Little wolf, do you know the way back to the meadow? I need to get home, my parents will worry." said Tukar.

Aspen opened her eyes sleepily, then remembered. "Oh no! My pack will be looking for me soon." she thought in panic.

"I need to go!" she apologized, getting to her feet.

"Wait!" he wailed in fear as she streaked away. Skidding to a halt, Aspen trotted back.

"Slow down, I need to follow you back." he pleaded, quickly joining his new friend.

"I guess we can walk together for a little while..." she agreed doubtfully.

Several minutes later, she tucked her tail between her legs. "Uh oh... My pack is here. I have to go." apologized Aspen, as she disappeared into the brush.

Not understanding him, she streaked towards her pack.

"Aspen. You disobeyed me." growled Father, in a voice so fierce the rest of her family trembled.

"I'm sorry. I couldn't help myself, the cub is so much fun." She whimpered, on her back with both belly and throat exposed.

"Well you've really done it this time. That cub is out there howling, obviously lost. Their kind can't see at night, and the sun is setting. We have to take it back." he growled.

"I'll go get him!" she replied, way too eagerly.

"Go!!! Do you dare question my ability to handle a CUB?" he asked dangerously.

"Of course not." she whimpered, hastily moving towards Mother.

"Cub! My name is Moonrunner. I am Aspen's father. You will come with me." he growled at Tukar. Turning, he trotted a short distance. When he looked back, the child was running - but in the opposite direction!

Moonrunner easily caught up, and the child tripped, then rolled into a ball. "Hmmm. Seems he can't understand me. I'll have to convince him that I won't harm him." thought Moonrunner.

First he nuzzled the boy, as he would a member of the pack. Then he laid down beside him, curled against the child's back.

"Did the little wolf send you?" asked Tukar, wiping his eyes. Tentatively he touched the soft grey fur on Moonrunner's chest.

The massive wolf gently encouraged him to stand, then walked beside Tukar, who kept a hand on him.

"I sure wish I had a torch. I can't even see my feet." thought Tukar as night rapidly settled in. He stumbled several times, and would have fallen if the big alpha wolf hadn't supported his weight.

"Aspen was right... This cub isn't bad." Moonrunner admitted to himself grudgingly.

This is my first submission for the Dreemport / Scholar And Scribe serial Challenge.