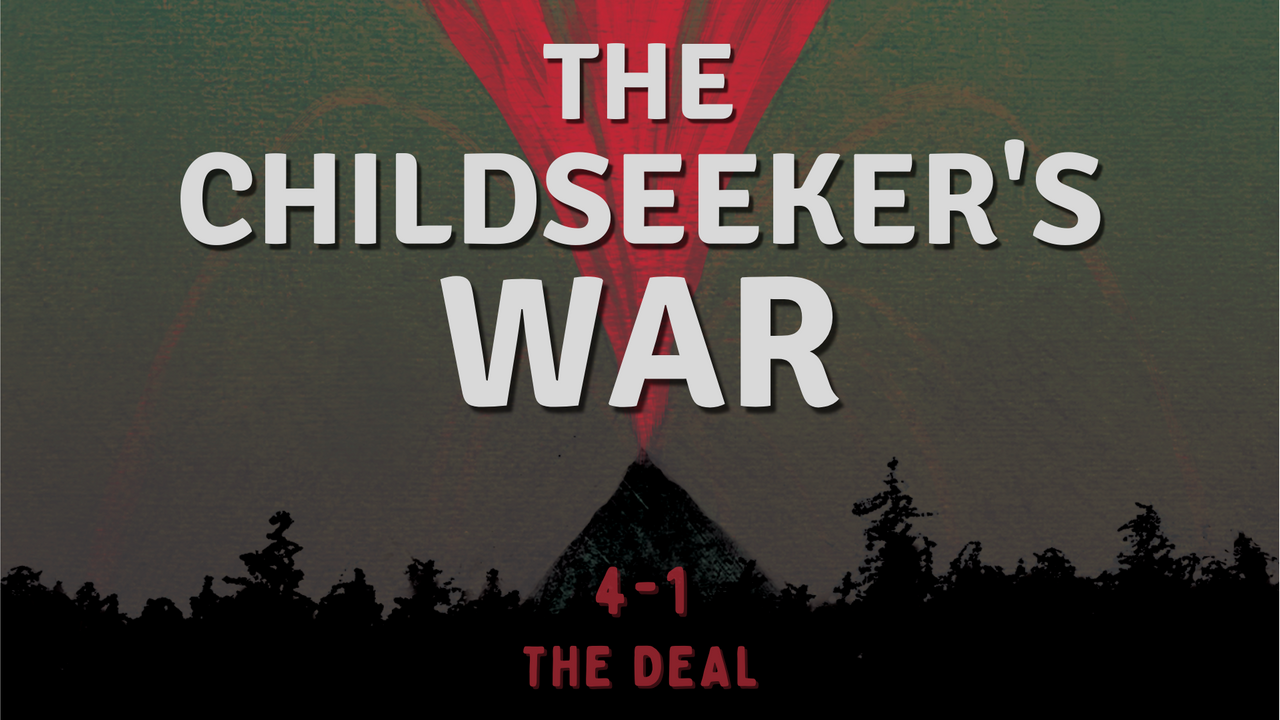 This is Chapter 4-1 of a serial fantasy novel.

“And you agreed to touch the witch?” the bole-marshal said again. For about the fourth time. Every time he did it, he looked at Junelight, as if she’d feel compelled to start soliciting hugs at any moment.

Eight of them were crammed into a very basic tent. It was four upright poles arranged in a rough square with some canvas draped over them. The middle of the canvas was rigged up by a rope, pulling the roof into a cone to help funnel any smoke from the central fire pit, which was presently dead. It was breezy inside, much to June’s liking—it smelled mostly of damp pine. She leaned against one of the poles, flanked by her bodyguards.

The kid under interrogation looked about as antsy as she felt. It had been five days since June’s little show in front of the triadic heads and almost nothing of note had happened, at least not since she felt the pyre go up. That had been four days ago. She itched to get moving, and this news of Falsesparkers clashing with local Roythans only made it worse.

The bole-marshal was on one side of the firepit, facing a group of four Seedwind. They’d all returned from the mission up north early this morning.

“And where were you when this was happening?” said the marshal, looking at the woman in the Seedwind group. The girl was in ridiculous shape, even for a Falsesparker. She appeared to be the leader. June could guess why: she carried herself differently than the other women in this encampment. Weapons were slung high on her back rather than flopping at her hip. Her armour was patterned with pale yellow feathers, their spiny forms smoothed into the garments with some sort of varnish, save the fluffy ends, which puffed about her like a frill of sea anemone tentacles. She was tall too, and looked like she had been in a fair number of scraps. Her left side, from face to arm to leg, was marred with hundreds of little scars. Tattoos wove and danced around these marks, accentuating rather than hiding.

“Ahead, with them. As arranged,” said the Seedwind leader. She gestured to the other two, who had to be related. One stood further back, arms crossed, wrapped full of belts. Despite the close quarters, he insisted on wearing a black, wide brimmed hat. He also wore black leather gloves, the only pair June had seen so far.

His brother (or son?) was more plain. He had one belt—a rope—intertwined with red beads and worn ‘round the waist where it belonged. Light brown leather garb, a sheepish expression and stance, his one prominent feature was the shag of fine brown hair that exploded around his head like a pregnant flower. Had it been free of dirt and grease, it might actually look nice.

“Tail-runner is an interesting assignment for a rookie,” said black hat, “but we all know how much she favours her little pollen puff, hm?”

“Sure worked out for the best, huh Dreff?” said the ansty kid.

‘Pollen puff’ was phrasing for affection, Junelight supposed. Perhaps the leader and antsy-kid were coupled?

It seemed an odd pairing, if true. The boy under interrogation was the youngest of the group, if scars and height were of any indication. His hair was messy of course, but it was cropped shorter than the girl or fluffy-head’s, and maybe half a shade away from midnight black. His armour was the same nondescript, overly-belted leather stuff; weapons also standard issue, save the sandy club he sported. His only other attempt at individuality was a leather headstrap. A drape of tassels sprouted from maybe a third of its circumference, threaded with green strings. The Bit family markings.

The girl didn’t appear bothered by the bickering. “Frix runs tail. As arranged,” she said, not looking away from the marshal.

“On mention of sentries, maybe we should talk about the bridge then,” offered Dreff. He was a mouthpiece, that was for sure.

“Just that it’s not the first time Frix met this witch, is all,” said Dreff.

“She was on the bridge, yes,” said the one called Frix, talking fast as the marshal’s eyes began to pop. “That’s how she figured out how to find us yesterday.”

“Tell the marshal how she beat you up too,” the girl said, winking.

The three of them chuckled, while Dreff glowered. Junelight saw her bodyguards exchange a glance.

The marshal scowled and bared his teeth. “This isn’t a joke, all of you. Frix of Bit, I am liking this less and less. This witch of yours, she shows up twice in short succession, twice intercepting you. Twice jeopardizing the mission, then helping you complete it. I don’t like it.”

“Hey, she was just looking out for her people,” said Frix. “She didn’t know she was helping. She thought I was helping her. They all think there’s some sort of army up north now though…”

The marshal contemplated this, hands on his hips. After a moment, he looked up at Junelight, addressing her for the first time since she’d been summoned.

“Will that compromise your plans?” he asked.

She raised her eyebrows. “Hard to say.”

“Can you tell if the witch… did anything to him? Did anything untoward?” asked the marshal.

They were all looking at June now. Her senses were always cycled up to some degree around this damned camp. It did not pay to let one’s guard down. If the Roythan this boy encountered had imbued anything permanent or lingering on him, which would be rare enough a skill, she’d’ve picked up on it long ago.

“He’s fine.” June glanced at the feathery leader. “I take it you didn’t get clear of the bridge without raising some sort of alarm?”

“No, Frix made things difficult by flirting and saving witches,” she said.

“Nice to see some of you are compassionate,” said June.

“You’re one of them, aren’t you?” The woman said. Her companions all started.

Junelight supposed it wasn’t too hard to figure out, yet that whole tent of leadership hadn’t really caught on until she was literally glowing. She’d have to keep an eye on this one.

“I am Junelight. A witch indeed.”

“What is it doing here?” demanded Dreff.

“Bettine,” explained the marshal, not bothering to mask the edge in his voice.

“Junelight of what?” asked the woman.

There was hurried rustling as Dreff exited the tent flap. The two younger Seedwind stared, agog. Fluffy-hair looked a little scared, and Frix looked more than a little intrigued.

“She shines blue, you know,” piped up her bodyguard—the one she had sparred with. June worried that he was developing some sort of strange respect for her.

“Speaking of witches beating people up…” chirped the other guard.

“Enough!” said the marshal. “I am trying to conduct a debriefing.”

“We’re surrounded by All-bit-tel and a witch,” said the woman, waving her hand about the little gathering. “Good luck.”

He seemed resigned to the notion, pinched the bridge of his nose and closed his eyes. “Fine. Fine. Swinn, go round up your brother. You,” he motioned at Junelight, “dismissed. We’ll summon you if you’re needed.”

“I await your summons,” June said, holding a tight smile.

She left, her bodyguards in tow, and made for the centre of the camp.

Thank you for reading. I own the license for all images in this post. Original cover art by jmz_creative. Follow me or the #childseekerswar tag so you don't miss new parts! I can also @ tag folks to alert you, just ask in the comments to join the readlist.
Scholar and Scribescholarandscribehivepizzawebserialchildseekerswarfictionfantasyvybhive-enginecreativecoin
jfuji61
via ecency
$ 14.17
96
H2
H3
H4
3 columns
2 columns
1 column
5 Comments