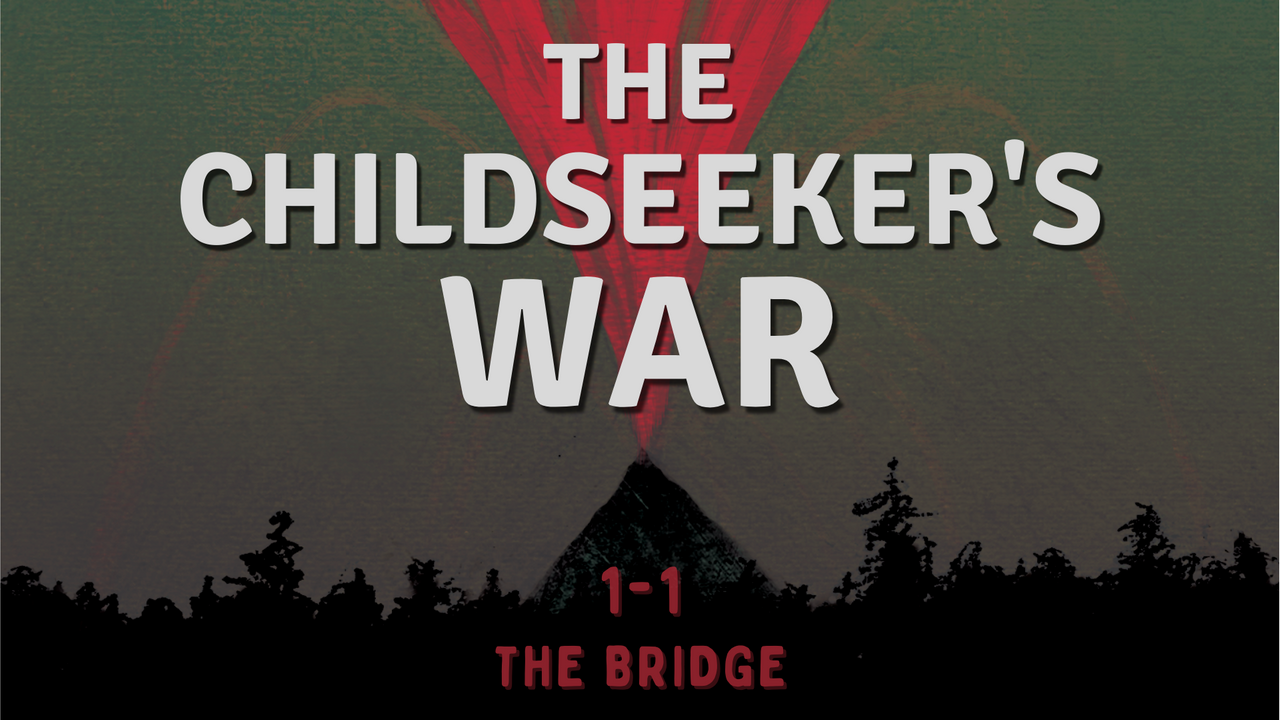 This is Chapter 1-1 of a serial fantasy novel. You are at the beginning of the story.

The transport moved slow across the bridge, piled high with logs and floating on a skirt of wispy red tendrils. To Frix of Bit, who watched from the cover of tall grass, it looked like a silent, upside down fire. Every now and then, a bright lance of light crept out from underneath and traced itself up along the surface of the logs before racing back down again.

A half dozen shrouded figures sat atop the cargo. Whenever one of those bright shoots flew past one, Frix imagined he saw a face within their heavy cloaks. They didn’t move much, nor did they speak. It was the closest he’d ever come to a real live witch.

His stomach rolled and twinged, and his belts itched. He fought the urge to scratch. Stillness was paramount. Plus, he wasn’t about to look foolish in front of his shoot-lead, Mossalea of Ran. He did risk a slow glance over at her, if only to break his gaze from the creatures. She crouched a few feet over, ready to spring, half-concealed in reeds. Equal parts strength and grace. Frix’s smile blossomed, and she must have sensed it. Her dark eyes came around and the corner of her lip curled up. It was the same little sidelong grin that had won him over many a season ago.

The air filled with a steady, growing hum. He looked back to the bridge. The giant, fat slab sped up as it neared the centre of the bridge. Then, a different hum from the north. A second vehicle, this one much smaller, came zipping along the wide, flat path that the witches had sliced through the woods. Four figures rode this one. It too floated on a tangle of wavy, swirling legs.

The smaller vehicle fell into pace behind the big one, which now decelerated as it passed the middle. A few minutes later, they’d both crossed, and their alien glow melted away to the south.

He waited until he couldn’t hear the hum anymore, and sang a soft note. The grass rustled, and his three Seedwind members assembled around him.

“Took your sweet time on that all-clear, Bit,” said Dreff of Tel. His big black hat was strapped to his back, the wide brim a dark halo around his hard, humourless face.

“If you’re volunteering to take sentry, I’ll be happy to trade,” said Frix.

Swinn of Tel caught Frix’s eye from over his brother’s shoulder. The boy’s usual explosion of fuzzy brown hair had been fashioned back into a crude ponytail for stealth’s sake. He winked.

“Quit it,” said Mossa, scowling at all of them. “You all saw that second floater.”

“You remember the plan, honeysuckle?” Mossalea murmured, a full grin finding its way onto her face.

Swinn mimed a gag and rolled his eyes. Dreff turned away, and unslung a pouch.

“You flirting with me, shoot-lead?” Frix said.

“Routine checkup,” she said, keeping her twinkling eyes on Frix. “You know, for the seedling.”

“Seedling? This is my seventh raid, I’ll have you know.”

“This is no ordinary raid, Frix of Bit. Run it by me.”

She could go from lithe and sexy to a whip cracking commander in a heartbeat, he had learned. He recited, “Let the transport pass, wait ten. Tels take the edges, shoot-lead takes the middle. Bit has the top nest. Take out the bridge, make way to the sparkcamp for the big show tomorrow.”

“That little one could get back here fast,” said Swinn.

“Which means… we have much less time to operate,” said Frix.

Dreff rejoined their circle, holding a grey pouch. “Let’s fire them all simultaneously,” he said.

“That’s the rockpunch?” Frix said. He stepped closer and Dreff pulled it away.

“Not for seedlings,” Dreff said.

“Oh, roots ensnare me,” Mossa said, and pulled out her own packet. She tossed it at Frix and he caught it, managing to still the insane urge to yelp. He must’ve looked the part though, because Dreff snorted and shook his head.

“I’ve heard it can shear a cliffside straight off,” said Swinn, coming up beside Frix, holding another pouch. Frix squeezed, remembering that it took a healthy amount of fire to set the stuff off. It felt like fine sand.

“It’ll turn the ends of that bridge into so many flaming splinters,” Dreff said, and spat.

“Ah, violence and destruction. The Tel’s true passion comes to light,” Mossalea said, and held out her hand. Frix tossed the pouch back.

“We should’ve still used one for the transport itself, I say,” Dreff said. He did sound more chipper.

“Yes, and the bole-marshal would have your head for it. And I’d receive a demerit.” Mossa turned towards the bridge. “The command was clear. The Rainroot swallows nothing but a bridge tonight. She’ll appreciate the gift, I suspect. Look how the bloodlight teases her.”

They looked. It was hard not to, now that Mossa pointed it out. The bridge birthed a dull red light from underneath. It grew brighter near the centre. No tendrils, to Frix’s relief. But as the last of the sun drained out of the evening and the world surrendered to shadow, the sacred water below took on a ghostly red pallor.

Mossa toed the dirt, hands on her hips, eyes scanning the emerging star show above.

“We’re still a go. Adjustments as follows,” she said. “We take the Rainroot back to the sparkcamp. On my mark, set the rockpunch to one fifth time, jump, swim like an eel.”

“Less time for them to organize pursuit before we’re long gone,” Frix said. The shoot-lead nodded, her gaze lost somewhere in the distance.

“Obviously. That’s tight though,” said Dreff. He was right. The original plan was to plant the charges, blow the middle first, then the edges, with plenty of time in between to get back to the woods. It was likely that tampering with the bridge would set off alarms, but they figured they had had enough time before a witch could reach them.

“Be deft then, Dreff of Tel,” said Mossa, “I’d hate for you to become so many splinters. Decent nose-runners are tough to recruit these days.”

Dreff smirked and turned towards the bridge, fingers playing along the handle of his weapon. The other Tel chewed his lip.

“Seeds to the wind,” Mossa said.

“May they take root,” they chorused.

“And fulfill their spark,” she finished.

Light as deer, they sprinted to the bridge.

Thank you for reading. I own the license for all images in this post. Original cover art by jmz_creative. Follow me or the #childseekerswar tag so you don't miss new parts! I can also @ tag folks to alert you, just ask in the comments to join the readlist.
Scholar and Scribescholarandscribehivepizzachildseekerswarwebserialfantasyfictionwritingvybhive-engine
jfuji63
via ecency
$ 14.22
214
H2
H3
H4
3 columns
2 columns
1 column
57 Comments