[Original Fiction] In Another World With My NFTs - Part 3 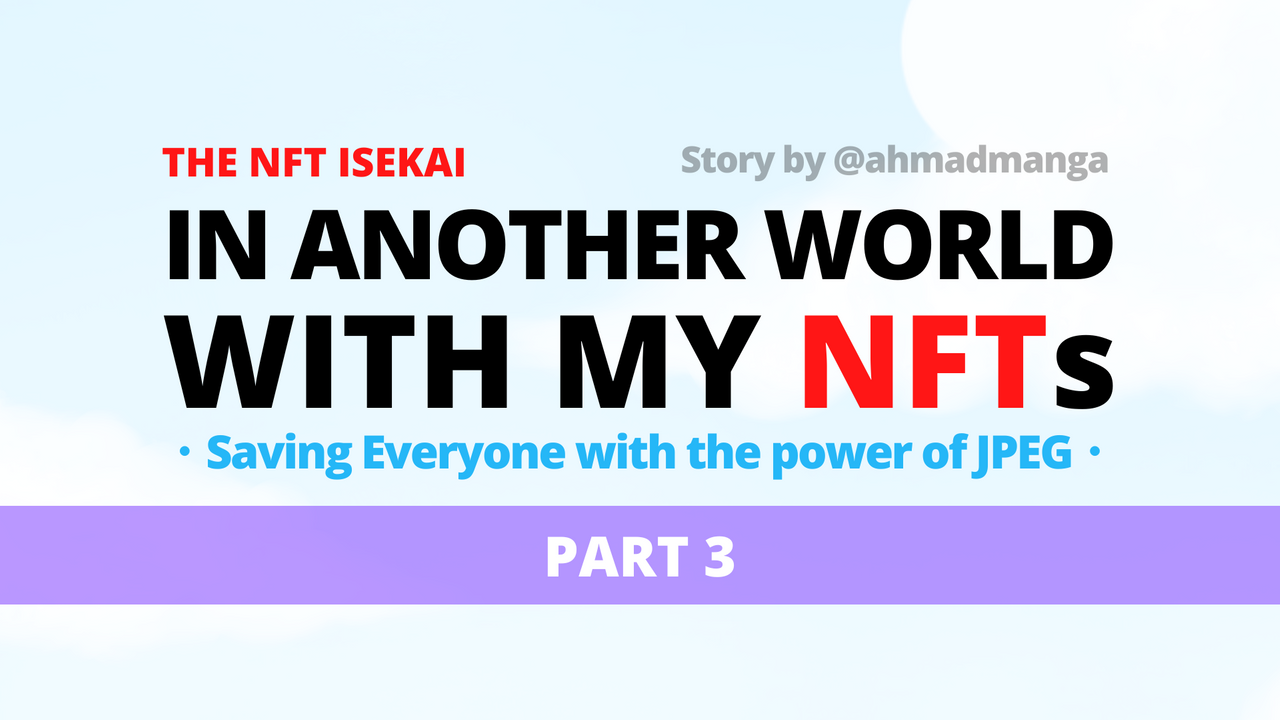 In Another World With My NFTs: Saving Everyone with the Power of JPEG

Once Upon a Memory:

In a dimly lit room, a lone teenager sat over his computer. The boy kept tapping and clicking as he conversed with his friends online. Once done, he closed the chatting application and glanced at the page on his browser.

"Would this really make me rich?"

The new guy in his friends group introduced them to the Blockchain. A new way of transferring money and data. Apparently, many people who bought some of the blockchain coins have become rich. With his help, everyone on their group has gotten a wallet. Getting his first fragment of a coin was admittedly joyful for the teenager.

"They’re pronounced Nifties. They’re are the next big thing!" Said the new guy. "I already have a hundred NFTs, why not check them out?"

The teenager stared at the Bored Gorilla image at his computer screen.

It was a part of a set of admittedly ugly Gorilla’s collection. He was never interested in the complete set, but he was promised if he got one now, he will be able to sell it to one of the collectors who wanted to complete their collection.

"Not cheap, considering it's only image..." Looking at the price, he sighed. "...But if I thought of it as investment, I'm sure this will worth it!"

The teenager clicked his first "Buy" button, out of the many clicks he would eventually come to regret. It was five years later when he closed that page of his past. He swore to never open it again.

Yet, he kept a reminder of his foolishness of youth somewhere on his computer.

The folder was appropriately named: "NFTs."

"Welcome home, Prettie!" A woman holding a metallic spoon jumped at us a soon as we entered. "Um? Who's this gentleman?”

"Mom, don't hug me like that!" The girl pointed at me after she freed herself. "This guy is Chad, he's a Wayloser."

“Yes, take him to the guests room.” Mrs. Taraxalia said to her daughter.

I was summoned to this world to save it but I wasn't given instructions on how to do that.

A few hours ago, I met the first person in this world. A girl named Prettie Taraxalia. Her first impression of me wasn't that good. I was hungry, tired and injured. Prettie was confused at first, but when she realized I was in pain. She cast a healing spell on me and told me to rest in her house nearby.

Most of the house is made of wood or stone, but it was crafted beautifully. I followed the girl to a room next to the entrance, and she sat me on a chair facing her on the other side of a small dining table.

“Isn’t it delicious? Mom’s the second best cook in the world.” She claimed proudly. I wonder who’s the first the place.

Getting called that will take a long time to get used to. It sounds like “loser” and that’s a hurtful insult in the world I came from.

"You called me that before. Can you explain what it means more?” I tried to focus on her instead of the food, but the bread was really good. It’s not just because I haven’t eaten for two days.

“Um… It’s in my father’s book so you can ask him when he gets back but…“ Prettie puts her hand on her chin. “People without memories appear sometimes on the roads. They all speak and dress funny. They all say they lost their way. That’s why we call them Waylosers.“

“…Lost their way.” I muttered. Are those others summoned like me? I mean, I have my memories, but she didn’t believe that after when I told her I came from another world.

“One thing is common…” She dramatically raised her finger. “Despite not looking like fighters, they were all powerful!”

“Hmmm?” If I was one of them… Maybe they all had powers like my projection.

“My grandfather’s friend was a Wayloser too, but he died before I was born...“ her face darkened as she said that, but she quickly regained her brightness. “Some say they appear randomly, some think there’s a meaning behind them. Scientists in the Capital still study this phenomenon.”

“What should I do, if I’m a Wayloser…” I had many questions, but my biggest concern after hearing her words… “I don’t want scientists experiment on me.”

“Why would you think that?” Prettie laughed, and I could her a chuckle from her mother outside the room. Prettie continued after regaining her composure. “They’ll just ask you questions to help their research. They might laugh at your obsession with saving the world though.”

“Saving the world?!” The mother said, she quickly entered the room and slammed her hand on the table, startling Prettie and me. “Did a voice in your head told you to save the world?”

“How did you know?” I was so shocked, Prettie said this before me. We never told Mrs. Taraxalia about this part.

“Just to make sure…” She held my hand, frowned at it, then let it go and asked. “Did ‘they’ give you anything special? You might be the awaited Hero.“

“My father’s friend…” Mrs. Taraxalia said. “He was the 5th generation hero!“

“I know about my grandfather!”

“The exact thing happened to him!” Mrs. Taraxalia looked at me with a complex expression. “He was a Wayloser who was told to save the world, and he claimed a voice in his head gave him Shadow Blade skills!“

“Then, my projection ability“ I finally said after hiding that part from both Prettie and her mother. “Is similar to his?“

““Projection?”” They both said. Mrs. Taraxalia had excitement in her voice, while Prettie only had confused expressions.

“Projection: Cyber Gorilla!” I focused my imagination on one of the photos I can project from my mind. A small Gorilla figure appeared on the table. I’m glad I could control the size of my projection. I held it in hand and showed them. “See?”

The image I projected had an embarrassing story behind it, but they girl and her mother don’t need to know that. To them, it’ll look like a normal Gorilla Toy.

Nearly a minute passed without any of us saying a word, and I started to lose confidence. “Ummm, is it that shocking…?”

“I never saw anyone able to make something like that…” With pale faces, they looked like they’re afraid of me.

“D-- Don’t worry… I won’t harm you.” I panicked and the gorilla figure vanished in my hand. “Huh?“

It seems that if I lose focus, the images I project disappear. There’s a lot I still don’t know about ability to project NFTs.

“Chad… You can use such a powerful magic! I knew it!” In just a few moments, Prettie’s expression changed from fear to surprise to excitement. “Waylosers are awesome!”

“Let’s go to the Capital. You have to meet my father!” Prettie excitedly shook my whole arms with her. “He’s one of the scientists!”

I looked at Mrs. Taraxalia and she said “…why not?”

It was decided that Prettie will take me to the Capital in the next day, but for now, I was more interested in what they know about saving the world.

Later that evening I asked Prettie. “You said your grandfather’s friend was the 5th generation Hero… What does that mean?”

This is my entry for the third week to @dreemport's August Writing Challenge. I'm publishing this story exclusively to Scholar and Scribe community until the challenge ends.

These Author Notes are a continuation of Notes on Part 1 and Part 2 I explain the Isekai genre there.

In this chapter, I tried to add some backstory to Chad. He was a teenager who got into the blockchain via word of mouth. He was naive enough to get into the NFT craze thinking he'll become rich.

...and yes. The Gorilla NFTs are references to the Bored Apes. Thank God I didn't get into that, haha~

I also tried to build the world more. It seems the protagonist isn't the first one being summoned to this world. There are Isekai Light Novels where that's the case including my favorite "ReZero." I decided to take the approach of "People are always summoned here for some reason" in my story.

The part about the grandfather's friend wrote itself, I always intended to make Prettie Taraxalia interested in adventure, so this became the excuse she'll have. I wonder where will Chad go next. What's his goal, and how far he'll go with developing his Projection powers in the future?

I'm enjoying writing this too much, so thanks for the community that made this possible~

Thanks to all those who encouraged me including and/or left comments about the story. & Thank You my readers, for making the story worth writing.

Comments & donations keep me motivated! ...Want to read other stories of mine? see "A Fascinating Legacy." and "I Look Around" You can download the latter PDF here.