The tiny little puppy shown here is Cody, our Catahula Coward. He's a Catahula Cur mix (black lab, husky, border collie, and sneaky aussie being the remainder of the mix), and he's a great big love bug. Weighing in at easily 65 pounds, his favorite pillow in the morning is my head.

We took Cody in from the neighbor across the back fence. His mother had decided she was done feeding and rearing puppies and abandoned them three weeks before they were due to have been adopted out, and suddenly his human mother had an extra puppy with no-one to care for him. It coincided perfectly with one of the times my wife desperately needed a tiny creature to be utterly dependent upon her. 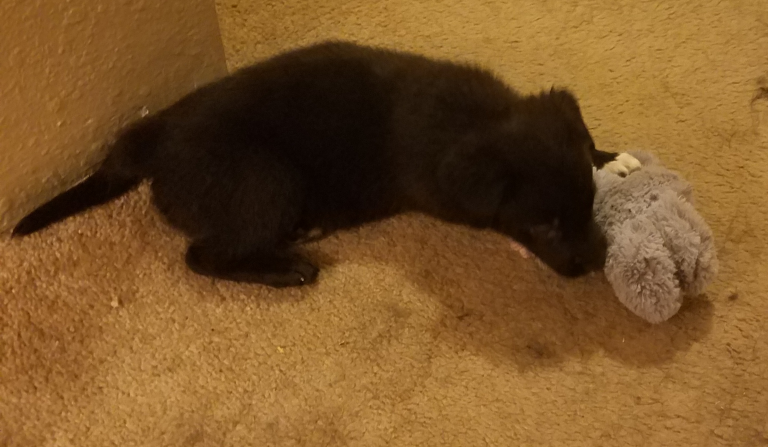 It's easy to understand how he came to be so afraid of everything, and such a momma's boy. He's afraid of chickens when they get into the yard, rain, wind, boxes making noises when cats play in them, cats, the giant pink cat tube, spiders, and anything with a shadow - frequently including himself. But he's a sweet boy who snuggles up between mom and dad on the bed all night and keeps us warm, or wraps himself around my head and makes me feel nice and safe when I'm waking up (as a PTSD sufferer, it's a huge comfort). Like his older brother Luca, Cody features heavily in the Dostix Ranch NFT collection. Look for future releases including pictures of him in his rain gear - because for a swamp dog breed, he absolutely hates water and being rained on.