Today we continue with my mathematics series about Signals and Systems to get into Butterworth Filters.

Butterworth filters apply topics that we discussed in the previous article, which was about discrete-time system design. This useful class of filters is specified by two main parameters:

The filter order dictates the sharpness of the transaction from the pass-band to the stop-band. The frequency response is, thus, monotonic. When talking about continuous-time Butterworth filters, the poles are related to the square of the frequency response's magnitude. And in addition to that, they are distributed equally in angle on a circle in the s-plane, which is concentric to the origin and with a radius equal to the cut-off frequency. So, when knowing these two properties, the pole characteristics of the system function are also directly available. This also means, that the differential equation that describes the filter can also be obtained quite quickly. 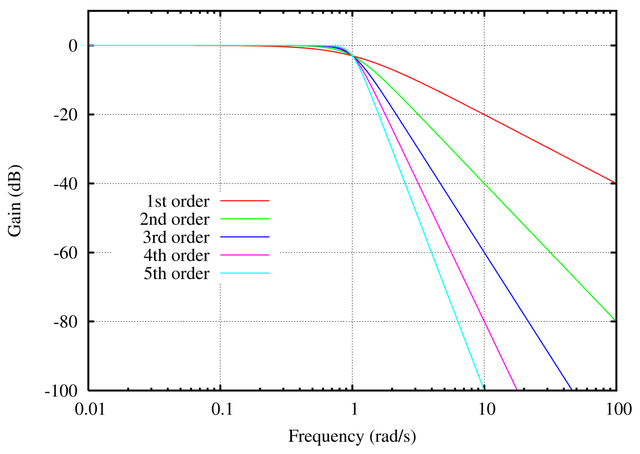 Applying techniques such as impulse invariance, it's possible to create discrete-time Butterworth filters. The filter specifications can be mapped to a corresponding set of specifications for the discrete-time filter, but there are of course some limitations. In order to avoid aliasing, the continuous-time filter needs to be band-limited. This can be done using a procedure known as bilinear transformation, where the entire imaginary axis in the s-plane is mapped around the unit circle. Since the imaginary axis is of infinite length, a non-linear distortion mapping between the two frequency axes occurs. Thus, even this technique can only be used when the filter is (at least) approximately a constant piecewise function (defined by cases).

Mathematically, Butterworth filters are defined as:

In the s-plane, the square of the magnitude of the frequency response gives us:

which gives us pole-zero patterns of the following form: 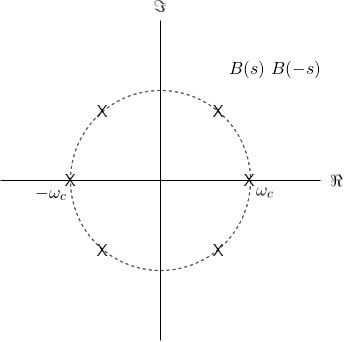 As a Fourier series, the frequency response is defined as:

For the Z-Transform, we need to determine B(s) and using partial fraction expansion we come up with:

where s and z are given by:

Next up is System Feedback...