Unsolved Mysteries Of Science : What Really Happens In A Black Hole

Newton's gravitational theory was a great scientific triumph, if not one of the greatest, as it changed completely how the universe was believed to operate - it completely eliminated the geocentric view of the solar system (sun revolving around earth), the theory confirmed Kepler's laws (which were actually practical laws of planetary motion) and it predicted and explained other phenomenon like comets, tidal effects and others.
The triumph however, didn't last for long, as time went by and experimental precision improved, it was discovered that planets displayed orbital motions that could not be accounted for by Newton's gravitational theory, even though that of other planets were negligible and could be ignored, that of Mercury was so pronounced that it couldn't be ignored and in fact, the first planet that was discovered by measurement to deviate from what Newton's theory predicted was actually Mercury, it was discovered in around 1859. According to Newton's gravitational theory, planets should move in a static but approximately elliptical orbit, though his theory was correct in that planetary orbits were approximately elliptical, it wasn't correct in that the elliptical orbits should be static, planets actually moves in elliptical orbits that is not static, the orbits rotates, see image below

This orbital rotation is called a precession while the difference between this kind of orbit and that predicted by Newton's theory is termed the "anomalous perihelion shift". There were several attempts by scientists of that time to account for this precession theoretically, despite being successful, the underlying theories were ad hoc - other observations could not be accounted for by the theories. It was until in the 20th century, after the inception of the theory of general relativity by Albert Einstein that the issue was resolved while also accounting for other observations and predicting new ones that were eventually confirmed practically.

As a matter of fact, the first prediction of Einstein's theory of general relativity was the accurate prediction of the observational value of the perihelion shift, it was this prediction that first convinced Einstein that his theory was the correct theory of gravity.

The theory of general relativity treats gravity as nothing more than geometric properties of spacetime due to the presence of matter and as such, certain strange phenomena like the perihelion shift anomaly can be explained and novel predictions can also be made. Examples of these novel predictions are gravitational time dilation, frame dragging, origin of the universe, gravitational lensing, black holes, e.t.c, which have been confirmed practically.

Of all these novel predictions, there's one that poses a problem for science, the theory of general relativity breaks down/fails to explain or predict what happens when applied to this new phenomenon, just like Newton's theory failed to predict/explain the orbital precession of planets and just like a new theory of gravity was needed to replace that of Newton's, a new theory of gravity is needed to replace that of Einstein (general relativity).

What then is this phenomenon ?

It is none other than black holes, black holes were predicted by Einstein's theory of general relativity but the theory fails to predict what happens inside a black hole, it only explains what happens outside/around a black hole.
According to general relativity, black holes are regions in spacetime where gravitational influence is the strongest, that is geometrically, the curvature is so extreme that if any object happens to find itself inside the black hole, it cannot escape, including light - despite light not having mass. Black holes are generally characterized by two things which are, the center/singularity and event horizon. 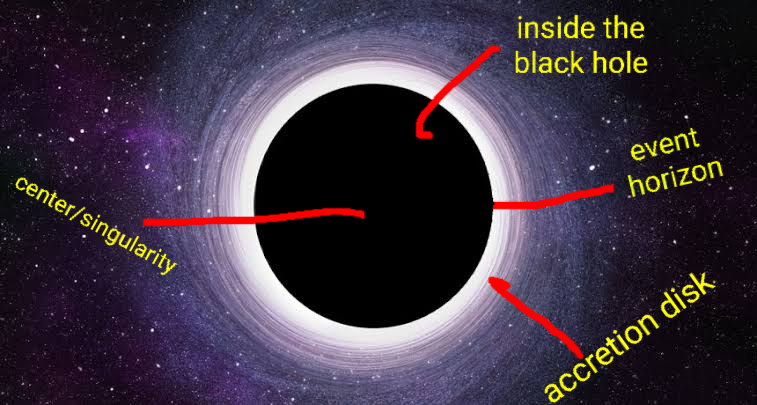 Why then are scientists still very interested in what actually happens inside a black hole ?

When stars die, they have two options, first option is in the form of a supernovae (exploding star) and the second option is a black hole. Remember that stars are hot glowing bodies made up of fast moving free subatomic particles (protons, electrons, e.t.c), the motion of these particles produces an internal pressure that counterbalances the gravitational pull of the particles towards the center of the star, thus giving it it's spherical shape. If the internal pressure is greater than the gravitational pull, then the star explodes (supernovae) but if the gravitational pull is greater than the internal pressure, then a black hole is formed, this is because the particles would all be attracted towards the center of the star and all the masses of the particles that makes up the mass of the star which originally occupied a non-zero volume would be forced to be trapped at center of the star whose volume is zero. Mathematically, since density is mass divided by volume (d = m/v , d = density, m = mass and v = volume), we would be having a non-zero mass divided by zero volume which mathematically has an undefined/infinite value for the density (try punching any any number divided by zero in your calculator). According to general relativity, mass, energy and momentum are equivalent and all are responsible for gravitational influence, this means we would also be having these quantities being divided by zero volume, also according to general relativity, these densities (involving mass, energy and momentum) are directly related to gravitational influence, if density is infinite/undefined, then gravitational influence is infinite/undefined, which is what occurs at the center of a black hole.

This undefined/infinite gravitational influence at the center of a black hole is responsible for why the center is called a singularity. Again according to general relativity, gravitational influence is directly related to the geometry/curvature of spacetime and singularities for spacetime appears not just at the center of the black hole but everywhere from the center of the black hole to the event horizon - though it is more significant at the center of the black hole, what this means is that spacetime becomes meaningless inside a black hole (infinite/undefined). Remember that motion is basically described in terms of spacetime, if spacetime becomes meaningless, then events inside a black hole cannot be described by the theory of general relativity. Practically, it is impossible for matter (object with mass) to occupy zero volume and for this reason, some scientists think that the particles originally present in the sun might not have been trapped in zero volume, they are trapped by the event horizon but undergoing events that cannot be described by Einstein's theory of general relativity.
This problem has prompted research into other theoretical formulations of gravity and one such theory is quantum gravity, this theory attempts to unify quantum physics and general relativity, this because inside the black hole gravity exists and is very pronounced, and also at smaller scales compared to that of atoms, quantum mechanical effects is expected to take over.
There are theories neglecting quantum mechanical effects that suggests black holes might be portals in form wormholes that leads to other parts of the universe or portals leading to other universes (multiverse), some even say they are portals leading to heaven (non-scientific actually). As at this moment, no theory has been able to successfully give testable predictions of what might be going on inside a black hole, the plausible ways of actually finding out practically seems impossible, as we now see

i. Unlike stars of which events inside them can be known from the radiations they emit (the radiations are caused by the motion of particles in the star), black holes don't emit radiations from their inside - though the outside does (through accretion disk), even if there is actually radiation inside the black hole, it still cannot escape to the outside, it can only escape if it's speed is greater than the vacuum speed of light but nothing can move faster than light, anything inside a black hole cannot escape.

ii. If we send a destructive object including man to a black hole, there's possibility that it would get crushed into pure energy before entering the black hole, through a process called "spaghettification" - you would first be stretched like spaghetti due to the huge difference in gravitational influence between your feet and your head.

iii. If on another hand we send an indestructible object to the black hole, once inside the black hole, it cannot escape and like we said before it has to move faster than light to escape. Unfortunately for us, nothing can move faster than the vacuum speed of light and everything seems destructible, well except for the soul - probably why some say black holes leads to heaven.

We should note that the singularity problem in black holes is the same problem in the origin of the universe predicted by the big bang - the universe in the beginning was a point with infinite density and temperature.

If we are actually going to resolve this problem, then there's more to the universe that we currently don't know.

Have a thoughtful day and see you next time.

What Happens in a Black Hole?

Thank you all once again for stopping by to read my jargons and also thank you @juecoree, @discovery-it and the @Steemstem team for your valuable supports.