I am a Doctor of Natural Sciences now ! - This is my PhD Thesis

I finally obtained my doctorate after 5 years of intense studies and now I am officially a Doctor of Natural Science .. Yeah ^^ .. In my post today I would like to talk a bit about my biggest project that I was worked on during this time. I was concerned about the polarity of interstellar water ice and the investigation on which exact effects are contributing the most and to which degree to the polarity of water, micro- or macrosolvation. I know that explaining this to a broad audience with just a little to nearly no background in physics or chemistry is a difficult task, but I will try my best to make it as simple and understandable as possible ^^ I will also focus on the probably more interesting introduction. I will also only show my main result here. Everything will be presented more qualitative than quantitative ^^ 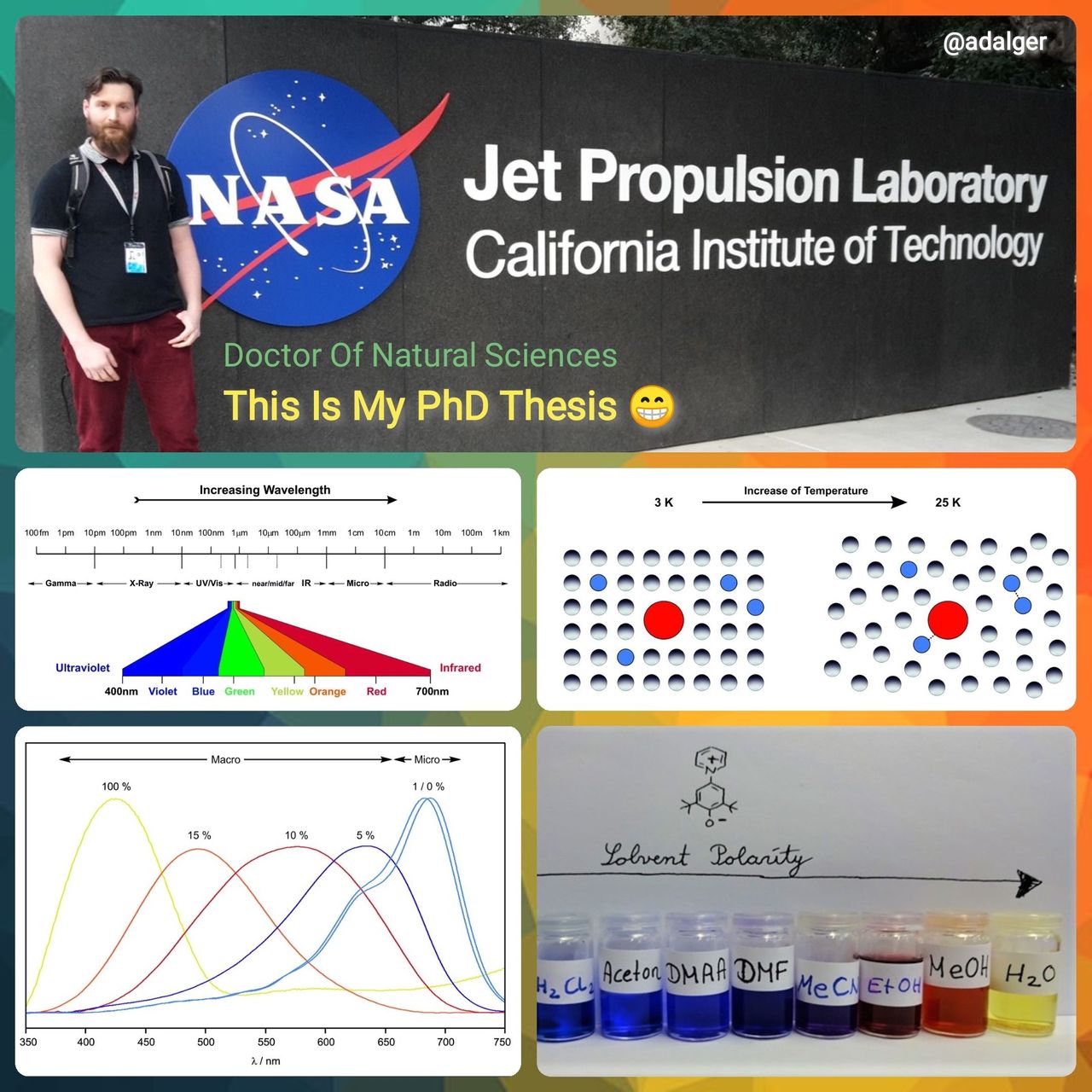 Water and its Importance for the Evolution of Life

To understand the chemistry and physics that are responsible for the evolution of all solar systems, it is necessary to understand solar system ices. These ices are formed from protoplanetary nebulae, after the former star just freshly exploded, and the main building blocks from which subsequently all planets and their moons are aggregating. Therefor studying the properties of solar system ices can give important insights into all the various solar system processes on a larger scale 😱

The most abundant interstellar ice of all, and the one that my work was focused on, is H2O, which was detected on all planets and moons in our solar system, except on Venus ^^ In addition it must be said, that a liquid medium, which enables molecules to come in close contact to conduct chemical reactions, is another indispensable factor for the evolution of life. Besides, it protects all evolutionary processes from heavy bombardments and surface impacts at the beginning of solar system formations and constant cosmic irradiation during their evolution.

A comparison of several liquid media, such as H2O, NH3 and CH4, clearly shows that water is the most suitable one for the evolution of live, for several important reasons ...

The most important source of light and natural renewable energy of each solar system is its central star. This solar radiation has a huge influence on all living matter and the physical properties of the whole solar system. Thereby the emitted light covers the whole range of the electromagnetic spectrum. It can be broken down and classified according to the radiation wavelength.

The electromagnetic spectrum of light broken down by the radiation wavelength

Thereby, 99 % of the energy of the solar radiation is contained in the wavelength from 15 nm to 4000 nm, which comprises the near-ultraviolet, visible, and near-infrared regions of the spectrum, with a maximum at 500 nm.

As the radiation emitted from stars peaks in the UV/Vis range, biological organisms adapted to this specific range. For example, the human eye is only capable to detect UV/Vis from 700 nm – 400 nm. Within this range light occurs red (650 nm), orange (590 nm), yellow (570 nm), green (510 nm), blue (475 nm), and violet (445 nm). Solar radiation in the ultraviolet region is also essential for the photosynthesis of plants.

The character of each solvent-solute interaction force depends on the strength of their dipole moments. Almost all molecules possess an dipole moment due to an unsymmetrical charge distribution in their structure.

The term polarity describes the sum of all predominant solvent-solute interaction forces between all molecules of solvent and solute. Thereby the various intermolecular forces are roughly sorted into two classes: Those interactive forces that are acting specific and directional, such as hydrogen-bonding (HB), and those, which are unspecific, such as induction (dipole - dipole) and dispersion (induced dipole - induced dipole). 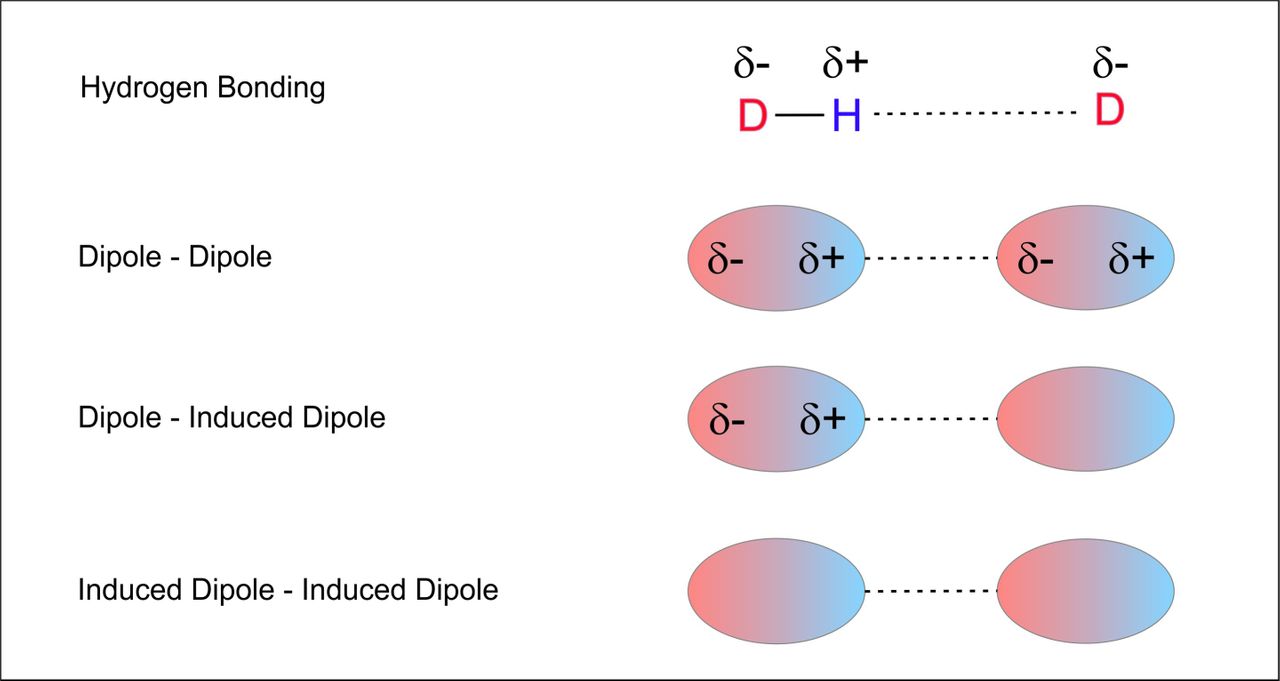 The nature of the acting forces is highly dependent on the respective solvent. H2O is capable of forming out strong specific and directional hydrogen bonds and features a large charge distribution in its structure which makes it a highly polar solvent. Contrary to this solvent like CHCl3 (chloroform) feature no direct interaction and nearly no charge separation. Thus, they are highly unpolar.

Classification of Solvents by their Polarity and contribution as HB-donors.

As different solvents also feature different intermolecular interactions, based on their polarity, the acting forces between the solute and solvent are different. As a consequence, the dipole moments of the ground-state and the excited state of the solute are also altered. Polar solvents stabilize the polar ground-state far better the unpolar solvents. This different stabilization due to the different polarity of the solvent then leads to a difference in the corresponding excitation energy. 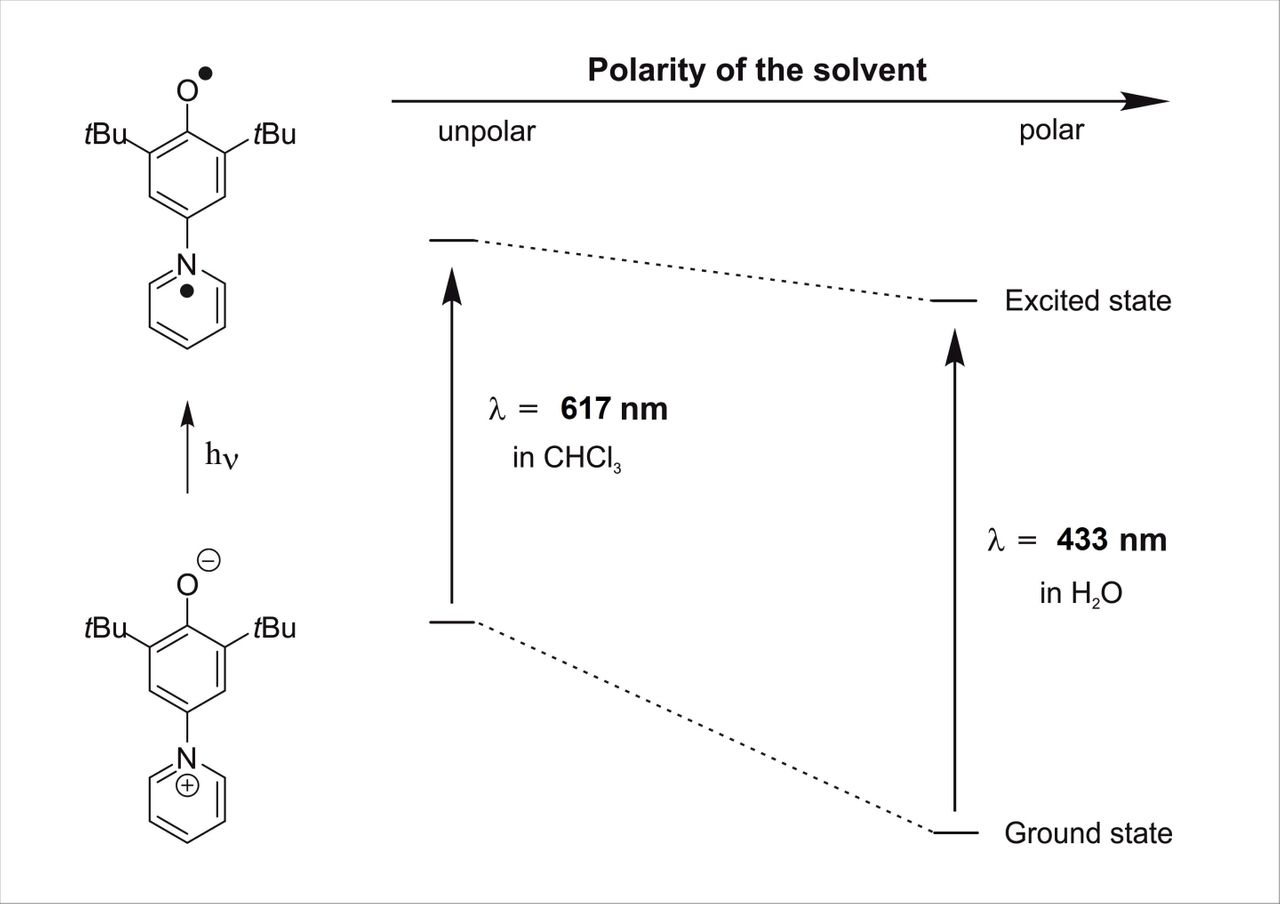 Polar solvents stabilize the polar ground-state far better the unpolar solvents. This different stabilization due to the different polarity of the solvent then leads to a difference in the corresponding excitation energy

The beauty of the dye that was used is, that the range of the absorption in polar H2O and unpolar CHCl3 cover the whole visible range of the light. So depending on the solvent this dye features all colors that can be imagined 🤩😍 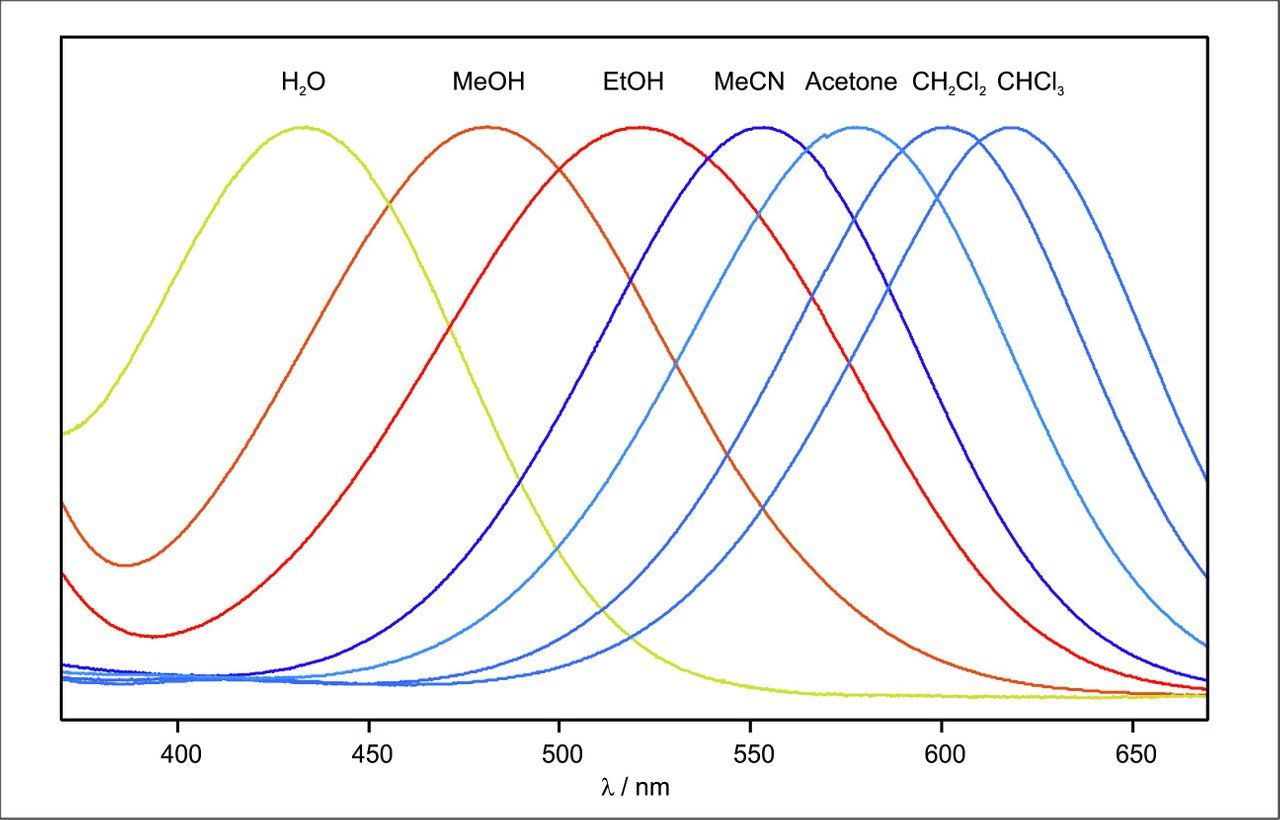 Did you all manage to come the whole way down the text to this point here? .. Congratulations, we successfully completed the introduction 😁 .. I really hope that I explained it in an easy and understandable way without using too many dry scientific but rather interesting details 🤔

The term microsolvarion refers to the interaction of the solute with just a few defined number of solvent molecules, while the term macrosolvation refers to interactions of the solute with the whole bulk of the solvent and includes all solvent molecules. To investigate microsolvation, the dye was isolated in a large excess of 1:1000 in an inert noble gas matrix, which features no remarkable interaction at all. The nobel gas itself is doped with a small amound of only 1% H2O. At temperatures of only 3 Kelvin the matrix that was produces is rigid and stiff. Annealing the temperature to 25 Kelvin allows the diffusion of H2O molecules through the inert noble gas and thus the formation of defined complexes with just a few molecules of water. Thus we can investigate microsolvation. For macrosolvation we isolate the dye directly in a 100% H2O matrix.

Solid noble gas matrix at 3 Kelvin, where it is stiff and rigid and annealed to 25 K, where it softenes up and allows diffusion and aggregation of embedded molecules).

0 Kelvin is defined as the lowest temperature that is theoretical possible, where all matter is completely frozen. It is equal to -273°C 😱❄️ The comparison of micro- and macro experiments was done by comparing the corresponding polarity that were measured by the solvatochromic dye that was used as the solute. Thereby the concentration ranged from 0% (only noble gas) up to 100% H2O concentration (only H2O). 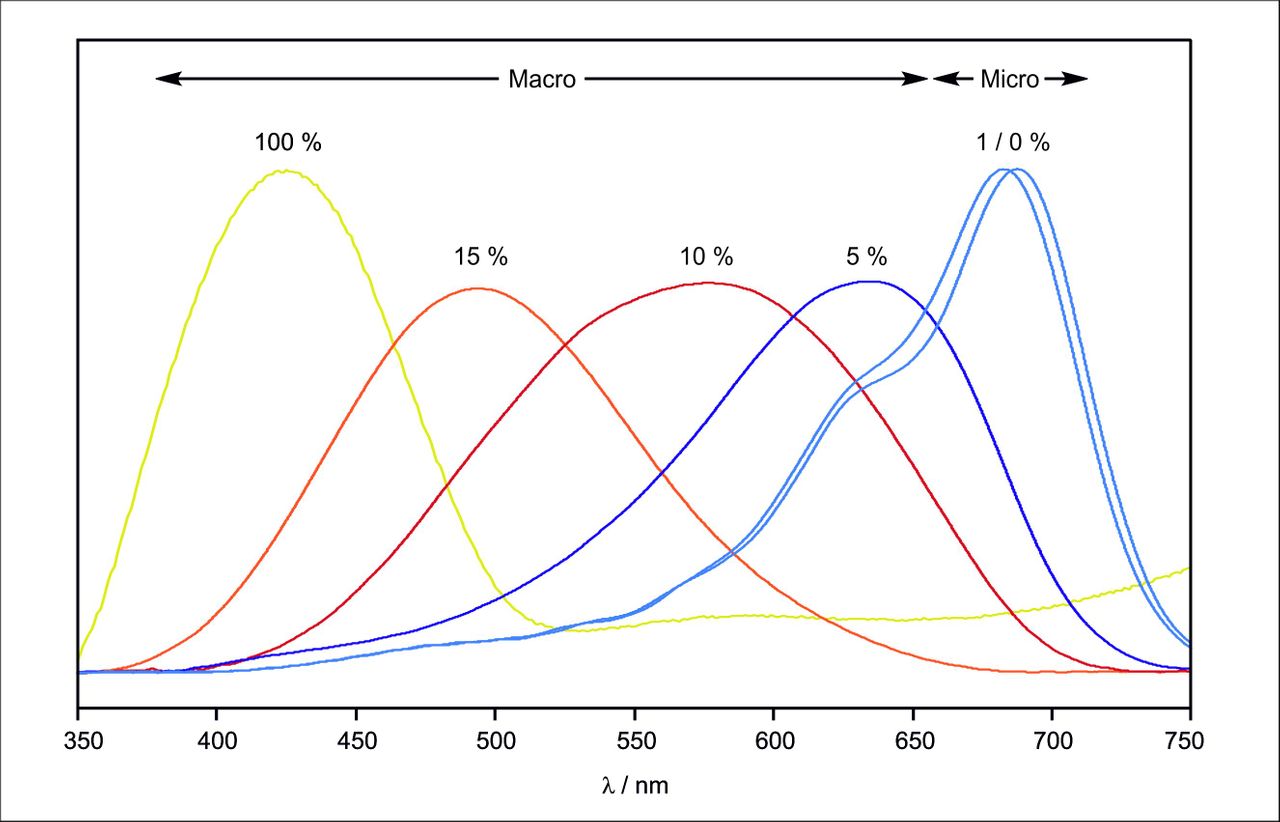 This tells us that direct and directional interaction, such as hydrogen bonding, which are considered to be far stronger than any other effects, only have a really small contribution to the overall polarity. The gradual aggregation of more and more solvent shells around the dye has a far bigger impact on the polarity. This can be explained as the increasing induction of all the solvent molecules upon each other are increasing with each new solvent shell.

Or, My Whole work in Simple Words ^^

One person, even if big and strong, can not push a huge bus from the street alone .. But 100 far weaker people, that work together as a team and are constantly cheering at each other and motivating and helping themselves, will do the trick .. But if now the strong guy is amongst them and directly in front of the bus, the cheering team members behind him also increase his potential to a large degree 😁 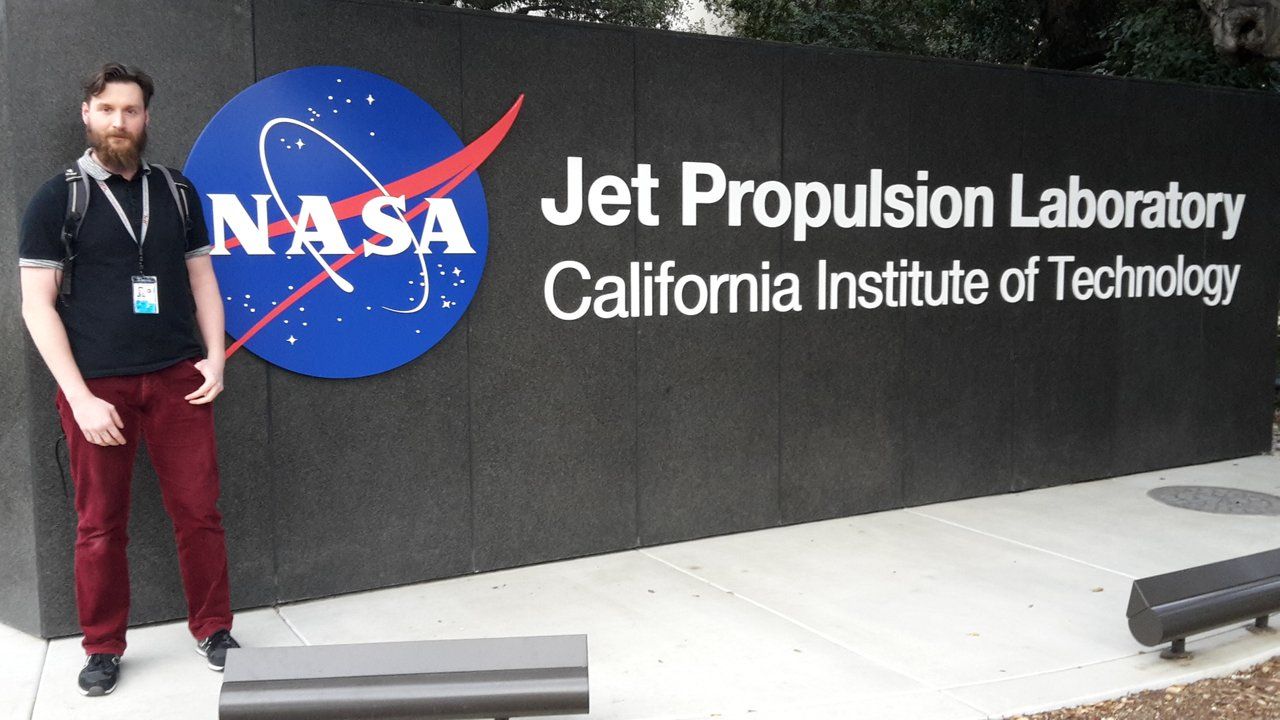 I really hope that you enjoyed this post here ^^

I actually spend a lot if time into this project and it was far bigger than what I am showing you here, but I think that this write-up is already big enough and it will also get too complicated if I go into more detail 😅 .. I had an really great time during these last years and the opportunity for some adventures all around the world too ^^ Especially my time at NASA and Americas National Parks were just sooooo amazing 😍 .. I also married and became a father of sun, who is 4 year old now 😁 .. But I also lost my parents and grandparents too during this time, shortly after his birth, which was quite hard and nearly broke me. All this deaths happened just within half a year, leaving me alone as the head of my own family 😭💔 .. I had to take a whole year off to sort myself and get back on line. This was the time when I started my journey in Hive, as a therapy, an where I met all of you here, became a nature blogger and found many many new friends ❤️ .. There was also Corona throughout my whole last year and still is 🙄 .. Wow, for me this PhD was an intense ride through life with the highest highs and the lowest lows .. It transformed me from a naive childish youngster into a life experienced adult .. I would have never imagined that before ^^

I dedicate this post to the family that I lost and never could witness the moment that I finally finish my academia, but who were the reason, due to their constant support, trust and motivation that I managed to get so far .. May you all rest in peace ❤️

All pictures were created by myself, ©@adalger, on the basis of the result of my PhD thesis. 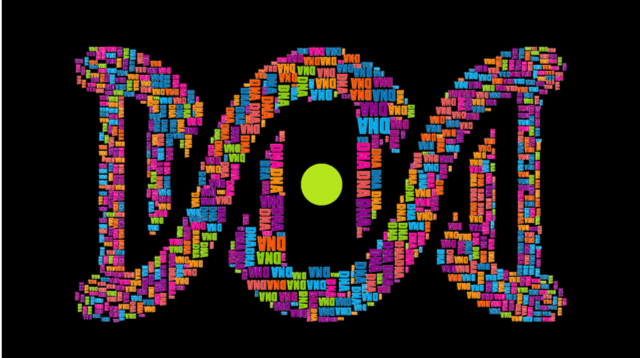