Gathering pollen from male stamens and germinating on female pistils? Sounds a bit raunchy! That's because we're making babies - Reclining Buddha cannabis babies, to be specific. Here's how I created a new generation of seeds, to be shared, stored, and eventually grown into medicine! Flowering plants such as cannabis make babies a little differently than humans do, but there are actually more similarities than differences, when you get down to the actual biology of it. Like humans, cannabis plants can have male or female parts. Male stamens produce pollen, which has a dry protective coating around sperm cells which carry the genetics. In cannabis, it is wind that naturally spreads pollen to nearby female plants, where it germinates upon contact with pistils, sending two sperm cells down into the ovary, beginning its development into a seed. ( A pregnant nug of Steem OG I harvested last year. )

This time around, the father was the stout and hardy "Monster". 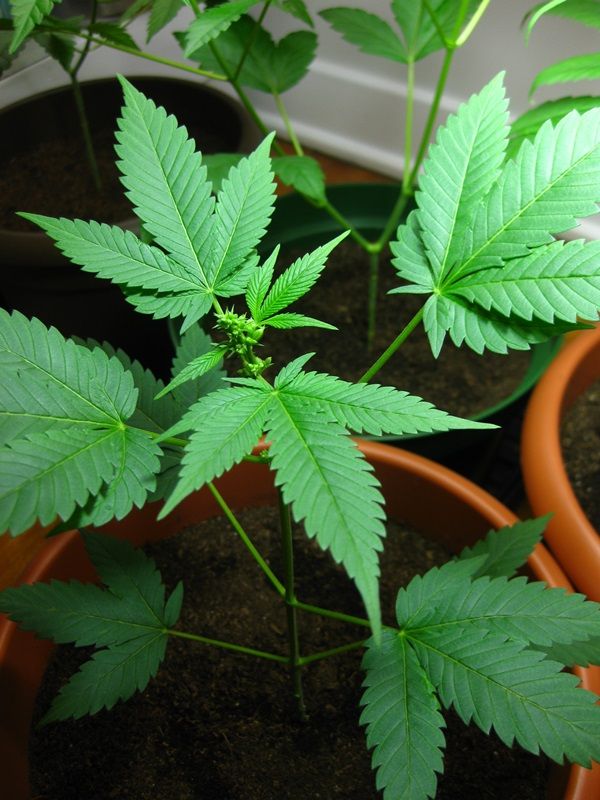 When I got up this morning, he was already fully open, ready for the smallest breeze to come past and scatter his genetic contribution into the world. 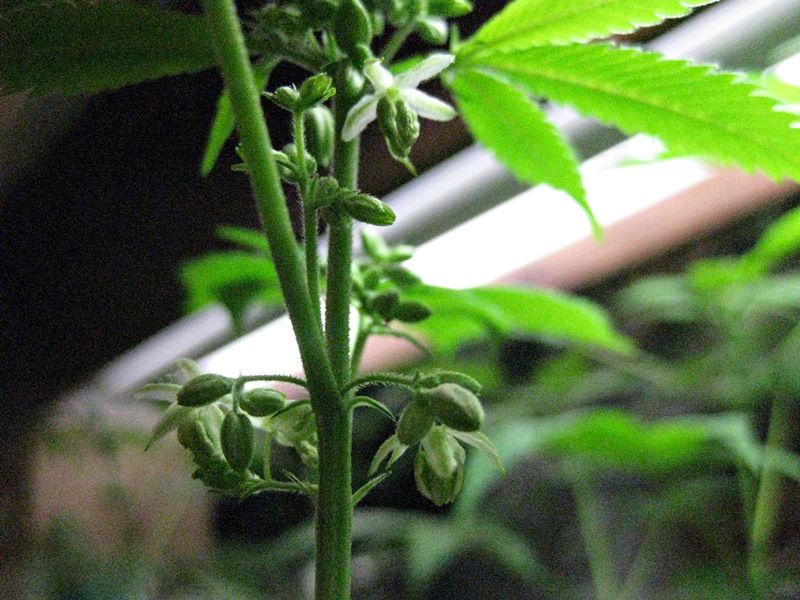 That's when I snipped off his stamens into a small glass vial! Ouch! You can see piles of pollen along the top of the vial: Next, the gardener does the job of the wind - spreading the pollen to nearby receptive female plants. If we do it carefully, we can control which plants - and which parts of those plants - get pollinated. Thus, we decide which genetic lines continue, and which don't. The process by which humans steer the genetic changes of another species over time is called artificial selection.

From my garden of 4 females, I chose 2 to pollinate:

They were chosen for being genetically superior ("Nature") and also healthier ("Nurture") than the others. Each has two growing tops, and I decided to pollinate one of them (half of each plant).

I marked the stems to be pollinated with a twist tie. A cotton swab is one suitable method of transferring the pollen: Then, like the wind, I deposit the pollen gently all over the pistils (female parts) on the selected branches: 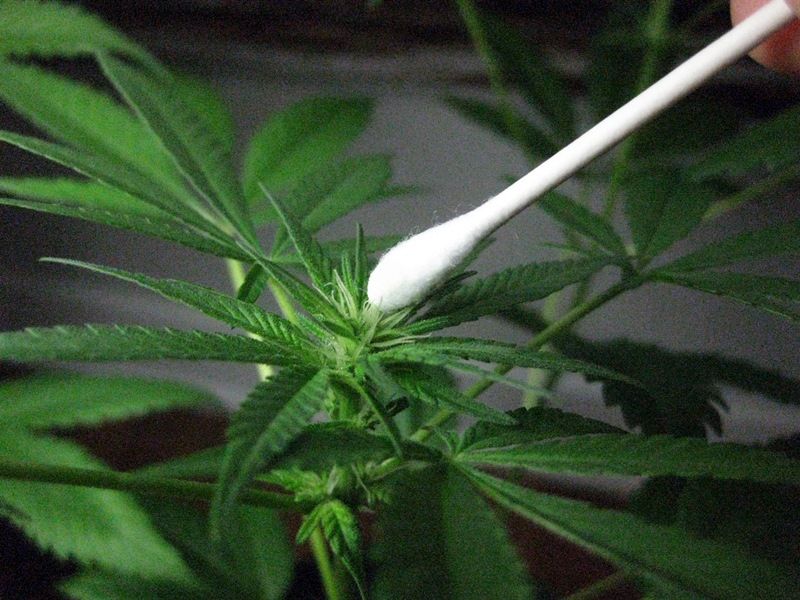 I made sure to touch each pistil, including the ones lower down on the same branch, at least once.

You can see a little extra pollen ended up on a nearby leaf: Care has to be taken to avoid pollinating more flowers than desired. Each of those pistils (aka "white hairs", which after drying turn orange or brown) can get knocked up, so you can imagine buds LOADED with seeds. When that happens, there's very little left over for producing trichomes and cannabinoids. We want medicine - sensimillia! A handful of seeds, from selected branches, will be a blessing. But I gave the area a wipedown, and didn't turn the fan on today, to cut down on "unwanted pregnancies".

Please also consider nearby growers, indoor and outdoor, whose crops may be affected if your pollen isn't contained. Even a few grains on your clothing can be carried to female plants, causing untold misery for the grower. It's a bit like not allowing your pets to run free and have dozens of babies. Do your part to cut down on unwanted cannabis pregnancies! Thank you.

As the females grow over the coming weeks, new pistils will form, as the buds "stack up". With the male gone now, there will be no source of active pollen, and the remainder of the buds will be unseeded. Only those pistils which have now received pollen will result in a new generation of Reclining Buddhas.

His mission complete, and now considered a danger to the rest of the garden, Monster (all 8 inches of him) is headed for the compost. But that's okay, and in fact, it's where they're all headed before much longer.

As far as I know, that's where we ALL are going to end up. We could be sad about it, but we could also realize that it's the way of Nature, and we wouldn't be here otherwise. We can't have our lives, and all the wonders that come with them, without also accepting that they eventually end. Monster is gone, but some of his pollen is saved in the vial, and his genetics live on through his offspring. Can any of us hope for better? Stay tuned here to see his children form and mature, to be shared with you and others here on the Hive / Weedcash blockchain, and anywhere else cannabis truth is allowed to flourish. 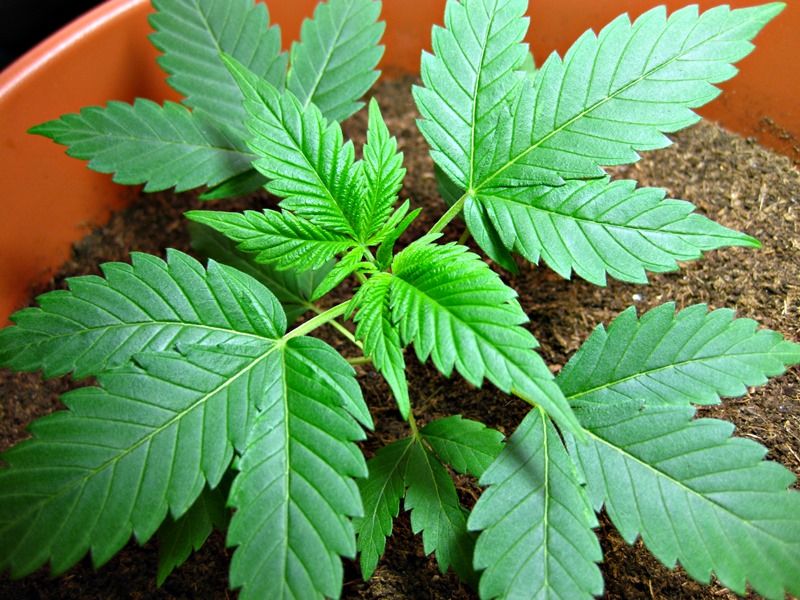 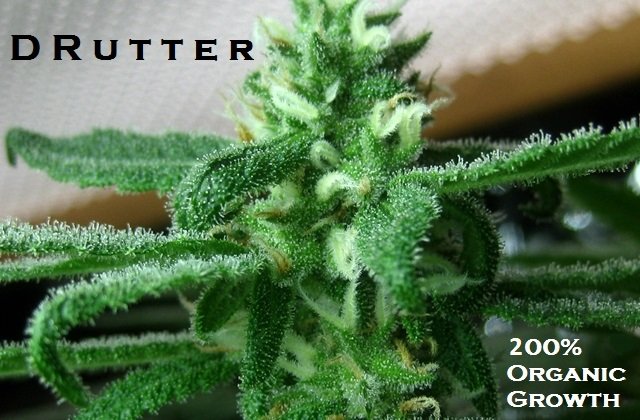