A few weeks ago I had a Rising Star contest and put up an Take RS card as the prize. Stay tuned below for the results and a new giveaway!

Given the current mechanics of the Millionaire mission, it takes 100 days of running it in order to earn back the one million STARBITS cost. In doing so, you are forgoing other missions that return XP for that 65% health that is required. Beginning toward the end of June, a new requirement is being added that you must maintain a certain level of fans in order to run the mission. This number of fans will increase by 100 each time the mission is run. This means that in order to keep running the mission, you'll need to spend the 10,000 STARBITS on buying new cards or packs.

There is a great analysis of the changes available from @libertycrypto27 that I encourage you to read: @libertycrypto27/important-changes-to-the-starbits-millionaire-mission-calculations-and-considerations-engita

Let's take a look at the rules for entry from the last contest:

In order to qualify for this giveaway, leave a comment down below. Also, don't forget to share your in-game username.

Entries will be accepted until June 4, 2022 and I will select one winner of the i53 Take RS card at random from all entries that followed the above rules.

Next, let's see how many correct entries were received by the deadline: 13. Congratulations to @luizeba for winning the Take RS card! I'll be sending your card to your shortly!

Because of the planned changes to the Millionaire Mission, I am going to increase my pack openings in order to boost my fanbase. I fall quite short of the required number of fans and will need to get caught up if I want to keep running the mission.

Let's take a look at the cards I received:

Considering that my new goal is to increase my number of fans, these packs were not very helpful on that front. Out of the six cards, I only gained 210 fans. That's less than 100 fans per pack which is the minimum needed to keep the Millionaire Mission going. It appears that purchasing cards on the market may be the only cost-effective way of maintaining mission eligibility.

My current RisingStar stats are as follows: My next goal is getting to level 65 so I can unlock the Band Auditions mission and complete the Local Gig Circuit zone. One of these days I will need to run a profitability calculation on my average daily STARBITS generated compared to what I'm going to have to start putting back into card purchases for the Millionaire Mission.

I've dug into my card holdings and will be giving two discontinued cards away - Buster and Jerome.

In order to qualify for this giveaway, leave a comment down below. Also, don't forget to share your in-game username. 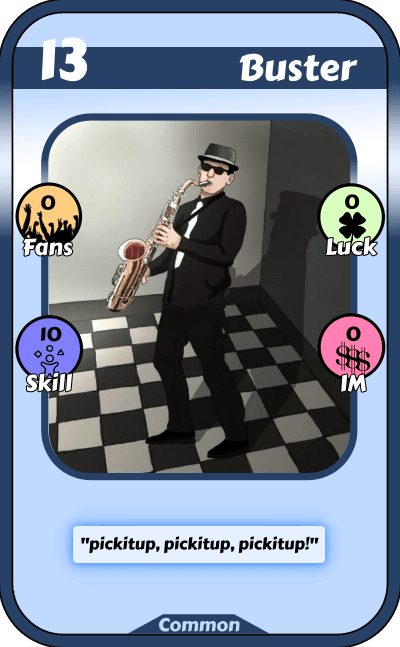 I found out about @RisingStarGame through the @Hive.Pizza project where there are many other aspiring Rising Star players. If you didn't know, the PIZZA token is now paying 12% APY on staked holdings! Check out thebeardflex's latest PIZZA update post for more details about this amazingly tasty token project.