Yes: two months of no music post from my fingertips.
No: though a very low frequent poster, just a tat more than a week ago since my last post.

Now, I'll combine the two (music and crypto) in this one. Good combo, if I may say so. But needed a bit of experimentation and a let go attitude along the way. Have a little patience and you'll notice. A little tip: Scroll down; Hit the play button; Come back here for a further read. First the music story; Then the crypto one. 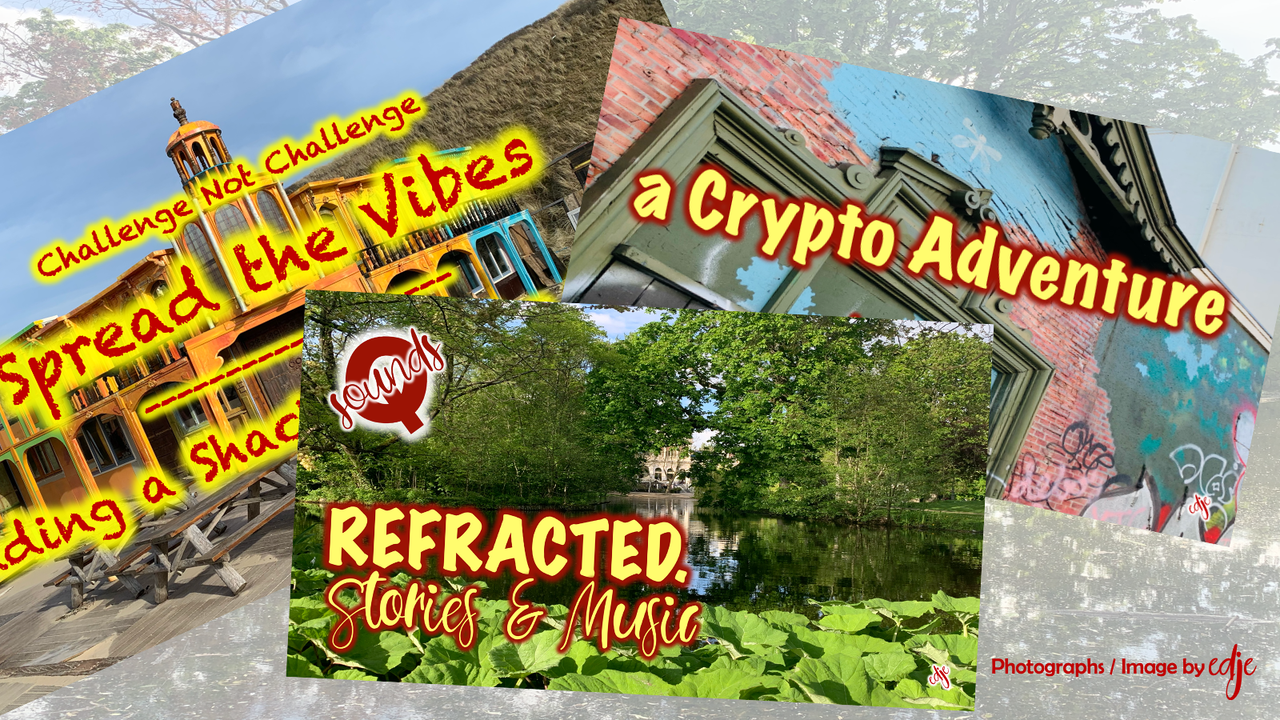 That one last post I was talking about before, the one about music (post), I was bringing you this artist from southern Europe "Refracted". The one I discovered by letting Soundcloud decided what my ears and brains were exposed to. Since then, I left Soundcloud in the same mode of operation. I wanted to discover more cool artists. But I have to tell you. It almost seemed to me like a lucky shot back then. In the meantime, I listened to many different artists, all of them set recordings and podcasts. Some were ok, but many were sooooo boring! Here and there a good track, the vibes more or less ok, but from most of these artists, I don't even want to know or remember their names. They don't understand how to keep things dynamic and moving. Don't they have ears?

Anyway, enough about the rant: It's enough edje! 😂

Yesterday I reached that point with the auto select by Soundcloud. Done! I had to revert back to my 'like' list. I needed some cool vibes. I needed something to offset my stress I'm getting from recent crypto investments. Some are not doing that well. Others are doing even worse.

Hey Hey: This chapter is about music edje!

Two years ago I added this guy to my favourite list at Soundcloud. It was after a visit to one of the best festivals I've ever been to. It was the second time I heard this guy playing. The first time was not that good, but the second time... Goosebumps for the two hours he played in the middle of the night at Gabricz festival. You like to read about how much goosebumps I had that time? Well, check this post.

Yesterday I decided to check his latest work and hit the play button for his most recent album: Eating Darkness. I'll not tell you a lot about it, other than that it immediately gave me a feeling of listening to something honest, fresh and cool! Certainly not the music I like to hear at a festival, but definitely something I like to listen to when in need of music that makes me move. This guy knows how to create a vibe and keep my attention, from second one to second last. Sure, some of the tracks I like a little less, others are darn good. The whole is super and it'll be kept as a bookmark for a long time to come.

Note: I still have to analyse if I really love this album that much, or it is just the fact this music was so much better than what I was listening to the last two months. I suppose I need some to conclude. Bu please, judge for yourself!

Just 8 days ago I posted (here) about this StableQuant project and Quant token. The token was under pressure at that time, but the shit didn't hit the fan. Yet.

5ct token became a 1ct token. "How low can it go?", was the question. The dev team became quieter, though they stated a few times they will continue the project while the stable coin farms ran empty. They even poured a million and a half of their own stash of tokens into the reserve, which was eaten up by the leavers within 30 minutes. Though I liked the project a lot - the Telegram (TG) community channel was super professional with some very knowledgeable peeps that gave me trust - I was getting a little worried. A wrong investment again?

One guy, a whale (almost) singlehandedly held the token above 1ct. Why would he do that? Good question: He believes in the team and the project. His own words. He has his actions to show for it. In the last few weeks, he made several valid suggestions to improve the service. But when the token hit the 1ct, it was not completely clear to me anymore: Should I continue to believe in this project? Shall I exit? Or quite the opposite: Shall I buy more?

Well, today is the day!

After days of thinking by the dev team and trying to come up with their next moves, they finally called out to the community for support. The team didn't want to head into the directions with more risk to the project, without the consent of the community. Within an hour a community delegation team of six was established and voted for almost unanimously. I believe something like 96% of the voters said yes. Yesterday they started to talk with the dev team. A day it took them to come up with a plan with the first step rolling out as we speak: the listing on Beefy. Please don't ask what Beefy is about. I don't know. Just see something about a super high APY (check here). Are those numbers for real? Probably there is a little catch, but whatever. I don't want to farm at the moment, I want to hold on to my Quant 🙃

A dump became a rocket as you can see for yourself in this Poo chart.

Note: By all means, anything in this post is not investment advice. DYOR. However, the music is a must, that's for sure! 😉