This is my entry post for the Season Hunt Challenge by @barbara-orenya in the Feel Good Community! This is the first week and the theme is Pumpkins! You can learn more about the contest and how to enter HERE! It's the time of year that pumpkins abound! I know here in the USA pumpkins represent Autumn and celebrating both Halloween and Thanksgiving. They also have pumpkins that you can re-use year after year! I've been seeing a lot of these "warty" pumpkins lately and I have to say that I love them! The one in the middle of my first photo is known as a Peanut pumpkin. It does seem like there are a lot more varieties around now then when I was a child or perhaps it was just about what was orange, big, round and would make a good Jack-o'-lantern. My son and a friend of his carved these pumpkins last year. It was at night and they carved them by the light of a dim porch light so I thought it best to do a few edits on them since they drew the face on them before carving and left a bit of the ink on them. Below that is a photo of them before they were carved. Also shown with an edit .. of course. 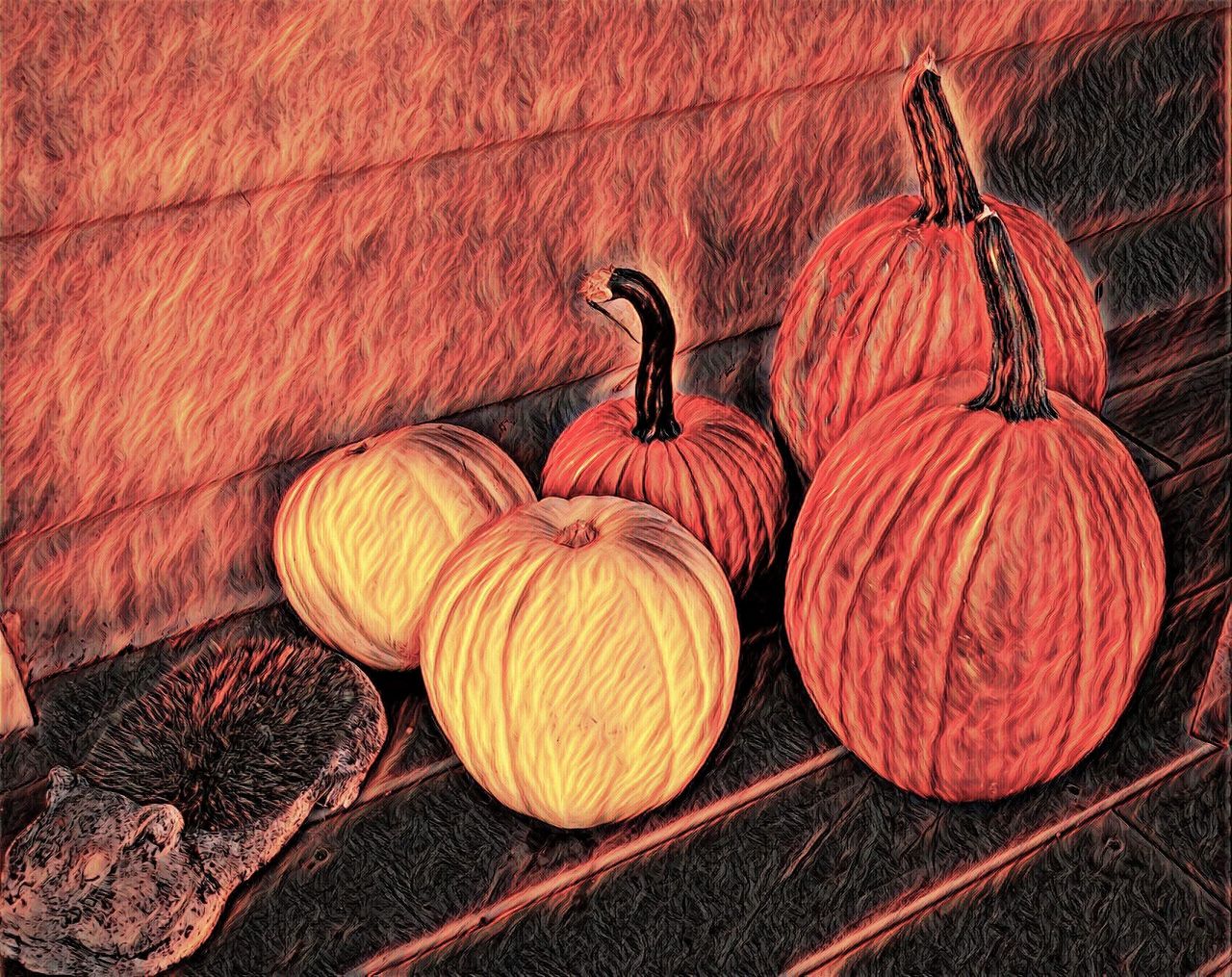 These days, I wait till after Halloween before carving into my pumpkins because some pumpkins make for some yummy pies and other baked goods. Some varieties are noted for being some of the best to use for pumpkin pies including the Long Island Cheese pumpkin and most blue (or bluish) pumpkins like the one I'm planning on carving up after Halloween. I believe this variety is known as a Jarrahdale. The Crookneck pumpkin or just Neck pumpkin is another variety that can be used in pies and soups and more. You could also make a pumpkin butter if so desired. I plan on saving a bit of raw pumpkin as a treat for my guinea pig Phil and for my daughter to give some to her bunnies. I'm also gonna save the seeds and bake them with some seasoning for some human snacking too! No! I didn't bake this pie but I do love pumpkin pie! This was a slice from a pumpkin pie that I bought and it was indeed yummy! Oh yeah! The white pumpkins are called Ghost pumpkins. I believe these are called "Baby Boo" pumpkins because they are a small (baby) pumpkin and "Boo" for Ghost. I don't think they look scary at all though in my photos! I'm gonna end my post with another version of my first photo. In stepping just a little to the side it caused a little sun flare in my photo. I thought it would make a nice way to end my post with the colorful lights shining down on the pumpkins. After all, they are the stars of my post and this first week of #seasonhunt! 💖 Thank you @barbara-orenya for #seasonhunt!!
All photos and text by me @deerjay. All rights reserved.