In this day and age, "Nazi" and "Racist" are two terms that get thrown around quite liberally as part of the methodology used to shut down discussion. 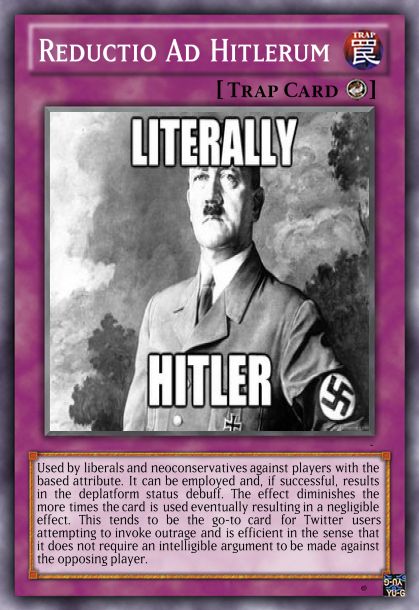 But there were unintended consequences

Godwin's law, short for Godwin's law (or rule) of Nazi analogies,[1][2] is an Internet adage asserting that as an online discussion grows longer (regardless of topic or scope), the probability of a comparison involving Nazis or Adolf Hitler becomes more likely.[2][3]

The rule of thumb I had learned is that generally speaking when two are debating that the first to attempt to charge their opponents as being a Nazi is the tell-tale sign that they are losing the debate. Usually these type of comparisons are shoe-horned into the discussion, in my estimation, as a diversionary tactic.

Are there instances where these comparisons are appropriate?

Yes, but the basis of those are generally undisputed which I think can be summed up as:

This is something I believe or hope we would all agree about. The trend however is that those that are labeled a 'Nazi' are by no means an advocate of genocide.

So what is the issue?

I think ultimately it is that there are forces orchestrating racial homogeneity as if cultural homogeneity would likewise be achieved. This type of thinking is in folly.

The problem lies in the mutual exclusivity of certain cultural values. No matter how vigorously one may try, oil and water will not become one. Certain ideas or notions in prevailing belief systems do not mesh.

Reconciliation is not possible. Thus, it follows that such ideas, if they are to remain without tension, should exist within the distinct people that hold to them that peace may be had.

Thus, attempting to have people with disparate views assimilate into a global community is a foolhardy venture that will only result in tension and subsequently conflict. Unless the intent is to destroy persons who hold these views for such would be the only way that harmony would be achieved.

I would rather that these people groups are permitted to live their lives and collectively govern their societies as they see fit within their respective nation states.

As for my nation, I would hope that the status quo would remain those that believe in the freedoms outlined in our constitution which they are prepared to fight for.

Do I think that demographics may play a part in that aspiration?

Perhaps. There tends to be some overlap in demographics and culture so this is very much in the realm of possibility on the macro scale. As a consequence, demographics is something I consider as a factor in the trajectory of my nation. I don't support mass immigration as I see that as a possible mechanism for our constitutional rights to be abridged. Is this concern founded? Based on current observable voting patterns, I think it is very much so.

Does this make me a Nazi?

Judge for yourself but I don't believe in genocide. I just believe people should live in peace and believe separation of incompatible cultures is vital in achieving that.