"Peace Upon You" is the Islamic greeting. "السلام عليكم" pronounced "As'salam Alai'kum" is said by many Muslims around the world even by those who never spoke Arabic otherwise. 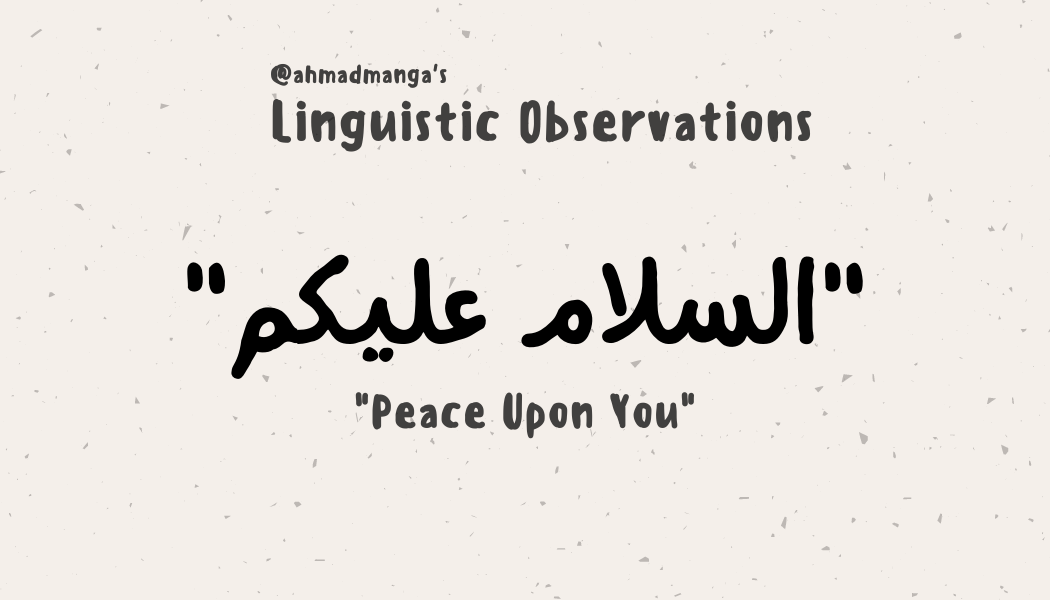 I wanted to do a series of articles about my observations on the Arabic language & the local Libyan dialect, for a long time. I was encouraged by the @crossculture community on Hive. So I'm gonna start with a greeting.

The phrase "السلام عليكم" has a lot of significance in Islam as well as the Arabic culture. It has a nice vibe/meaning to it, that can be appreciated by people from all cultures. If you remove all the religious significance from "السلام عليكم" it still stays a nice greeting, I'm proud from being from a culture who practices it frequently.

The phrase is said in plural form, but it's also used to refer to a singular person. To me this feels like the royal "we" but it's used to refer to the second-party instead of the first-party. love the implications of this.

As Muslims, we are taught to reply when someone greets us with the same "السلام عليكم" or the better "السلام عليكم ورحمة الله وبركاته" which means "Peace, the mercy of God (Allah) and His blessings upon you."

If you watch Youtubers who do formal or long-form content, especially on Islamic teachings. They'll probably start with this phrase instead of the shorter one. It's more formal, polite, and respectful.

The interesting part however is in the hidden meanings of this phrase. One of Allah's names is "السلام" which literally means "The Peace." Some scholars believe that the greeting "Peace upon you" should actually be "Allah is with you," since "السلام عليكم" can mean both things.

The fact there are so many levels to the Arabic Language is something I only understand as an adult.

Many Arabs use a shorter version, especially when in informal "سلام" (salam) which means "Peace." While I don't use this shortened version in every day speech, I do frequently use it online...

In Libya, this greeting is used by most people in most situations. All three forms mentioned above are used to some extent. Some of my friends & family greet ourselves with "سلام" after only 10 minutes of absence sometimes.

It's also a great way to start a conversation when asking for directions on the street. "Peace upon you, can you tell me where I can find this address?"

There are multiple Libyan dialects depending on where you live. In the local dialect of Tripoli, we pronounce the phrase closer to "Is'salam Aleekum." Though since we started using the internet frequently in Libya, more people started to pronounce "السلام عليكم" in the standard Arabic way.

I'll end this by saying that "As'salam Alai'kum" while being an Islamic greeting, it's not exclusive to Muslims. Many Arab Christians use it as a greeting as well, so the phrase long-passed being a religious term, and nowadays it's mostly used culturally.