An old house. What's in it?

I'm not a wizard or a magician, I'm just learning to be one.


About a month ago, I made a report about old houses in one of the districts of the city of Kirov.
Today I want to show the inside of one of the old abandoned houses as part of the Shadow Hunters community.


Actually, the photo itself is with a shadow, in order to fit into the framework of the project. The house has been uninhabited for a long time. The girl said that the owner of the house died about 8 years ago, and the heirs do not support it in its proper form.
The house is overgrown with trees and bushes on all sides.
The house is located on the outskirts of Kirov, and there the city Administration does not look after the improvement. As a bonus - raspberries! Very tasty. The berries are lying right on the window. The windows are located very low above the ground. We can say that one side of the house is directly embedded in the ground. Inside the house is complete chaos. From the word AT ALL.
Most of all, I was surprised that there is no free space on the floor from some cotton wool that was pulled out of mattresses, blankets, or maybe a sofa and armchairs that were still in one of the rooms.
By the way, there were 2 rooms. It seems that one room, through the window of which I was going to climb, was a bedroom, and the second half of the house was a kitchen and an entrance hall.


Well, then. One of the windows was without glass, so I entered the house through it.
I looked around. It's creepy! I worked with gloves on, for some reason I didn't want to touch anything with my bare hands. Weird. There is a chest of drawers. My grandmother had a similar chest of drawers. Very cool thing! I like this kind of furniture.
Well. there is a chest of drawers, and above it a chimney from the stove-bourgeoisie.
Maybe there was some kind of heating system in this place? Actually, I didn't see anything like a boiler or a stove. Maybe everyone has already dragged this out of the house.
There are still some things in the dresser. But it is clearly visible that they were looking for something valuable in it. It must have been a long time ago, because you can see the cobwebs on the dresser drawers.
I didn't look in the dresser. But this kitchen cabinet is already an attribute of the late Soviet period. Similar cabinets were assembled at a local furniture factory. Such furniture could be found in the 80-90s of the last century in many houses in our region.
I will say more, one more local furniture factory made the so-called "furniture walls". They can be found even now in the apartments of people who are over 50.
A small refrigerator. They had the name "Saratov". The door is covered with a protective film. A man lived, used all this and suddenly... all this has become unnecessary for anyone. I sometimes get scared from such thoughts!
Three-liter glass jars! There are many of them. Tomatoes and cucumbers are usually preserved in these cans. At one time, they were very scarce. They were absent from trade and people were very sensitive about their safety. And here they also stand and are not needed by anyone. 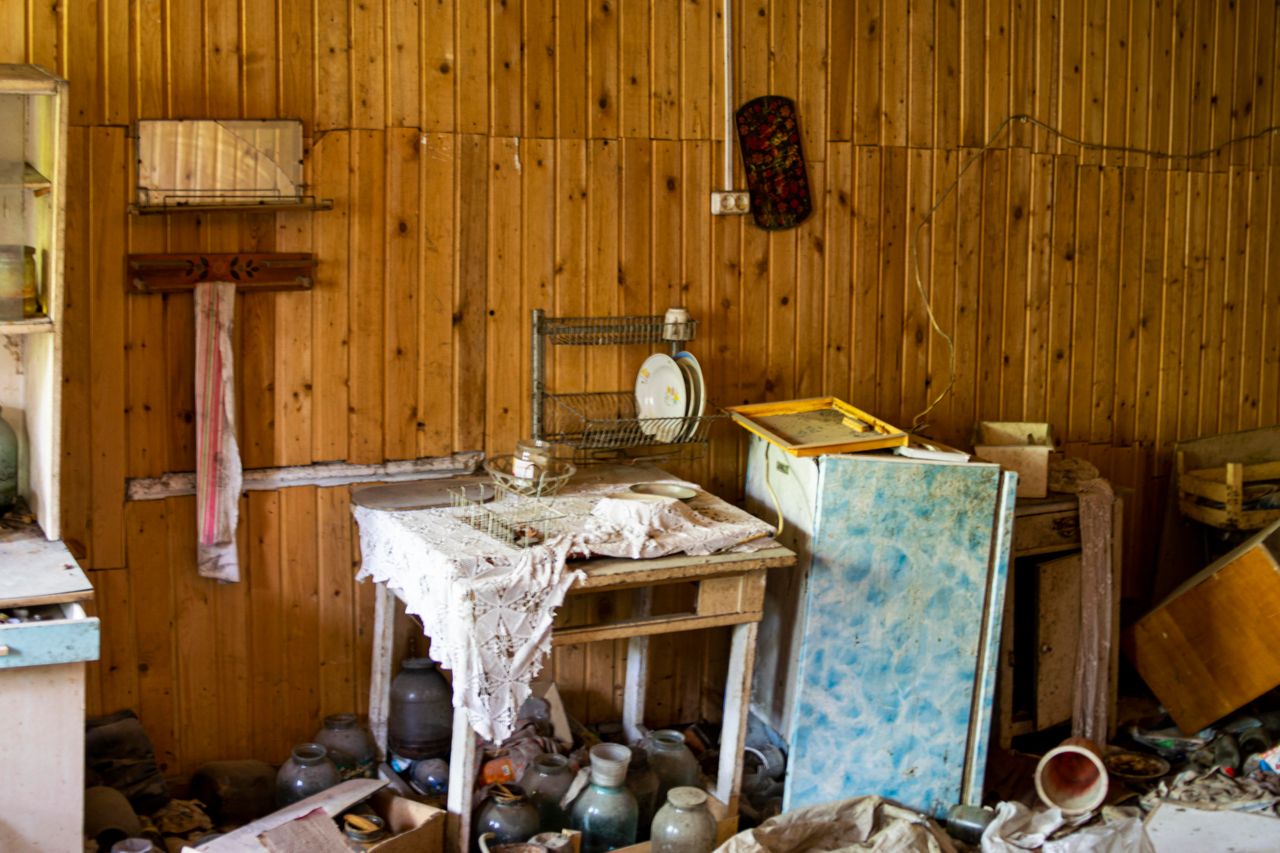 Why is there so much soft stuff on the floor? Mattress and blanket filler? It seems that they were looking for treasures.
Probably, they didn't find it. But the pogrom was organized thoroughly.


well, under the curtain, a little piquancy.
A female attribute of underwear.
Why is he here? Someone came here, took it off and didn't want to put it back on later?;) In my childhood years, I often inspected the old premises with the guys, which were being demolished. But I have not seen such lawlessness anywhere else. It was really creepy for me to be here.
By the way, the cat was not there.
The central entrance door to the house was closed with a padlock and there was a large gap between the doors, through which the cat went out into the street. The girl then caught her and took her home.

I wish everyone happiness for life and good luck for every day.