I love watching documentaries on ancient heritage, architecture, and technology. I am amazed at the masterpieces our ancestors created without the pieces of machinery we have today. We still don't know how they build these structures, and we are continually looking for this lost technology. Even in ancient times, it is natural for us to modify our environment to make it efficient, aesthetically appealing, or profitable. One architectural marvel makes us wonder how ingenious our ancestor is the original architecture cut out from living rock. We called it rock-cut architecture.

Rock-cut architecture is structures excavated on solid rock as opposed to naturally occurring caves and caverns. Our ancestors practically formed these buildings by excavating tunnels and caves through rock rather than bringing the materials for the buildings. Rock-cut architecture has a different approach in building these structures, but it mimics the façade and interiors of the traditional ones. Our ancestors carved out the interiors from the roof and down to the planned space. It prevents workers from falling debris while constructing the structures.

Our ancestors built rock-cut architectures to serve as temples, tombs, and cave dwellings. They carved out most tombs from leveled rocks while those with an impressive façade carved from the side of a cliff. Building rock-cut architecture is a laborious endeavor. It needs ancient tools and methods, which possibly combines quarrying the rock. One of the arduous and impressive builds is carving out below the rock surface with a large hole surrounding it. Here are three remarkable dwellings, temples and tombs around the world hewn from stone in the world.

One of the most famous rock-cut architecture is Petra's Al-Khazneh ("The Treasury"), which Nabateans built around 213 BC. It is an archaeological site in the Jordanian city of Petra, which is along the trade routes and touted to be hundreds of years. They sculpted the facades directly into the cliff with vibrant red, white, and pink sandstone. In the early 1800s, a European traveler mixed Bedouin costumes with the locale to locate the city, which was empty and near ruin for centuries before rediscovery. We can see the structure amid the rugged desert of canyons encircled by mountains at the modern-day Hashemite Kingdom of Jordan. It is the center of trades during the Nabataean empire between 400 B.C. and A.D. 106. The Treasury is a royal tomb with an alluring façade, but a relatively small hall. It has a giant urn carved above the entrance, which bears the hundreds of gunshots. Bedouin tribesmen caused damage in the façade due to open firing with rifles to loot the inside the urn, a solid stone. To date, we can see a mix between Nabataean and Greco-Roman architectural styles in the tombs. Unfortunately, thieves looted it, and archaeological treasures were thus lost.

It is a cross-shaped church carved out of a tufa limestone in the Amhara region of Ethiopia between the late 12th century or early 13th century. It is a UNESCO World Heritage Site aside from a pilgrimage site for Ethiopian Orthodox. Hence they are cut from relatively fragile, porous volcanic rock; a few churches are in danger of disintegrating due to natural weathering. The locals reinforced it with scaffolding to support a corrugated iron roof canopy. It ruins the aesthetic values but necessary to preserve the structure. An aerial view of the church of Biete Ghiorgis (image credit)

Lalibela has 11 medieval monolithic cave churches situated in a mountainous region in Ethiopia, which is near the locals with a traditional village with circular-shaped dwellings. They deemed it to be a new Jerusalem. Besides, it is a high place of Ethiopian Christianity, which still holds true to date as it is a pilgrimage site. The ancient Ethiopians constructed the churches hewn from the living rock of monolithic blocks. They chiseled out blocks to form doors, windows, columns, various floors, and roofs. It has extensive drainage ditches, trenches, and ceremonial passages, some with openings to hermit caves and catacombs. Several churches' interiors have mural paintings.

It has 34 monasteries and temples that extend over more than 2 km. They carve it through a high basalt cliff by digging side by side in the wall. We can locate it in Maharashtra. Ellora, which existed since 600 AD. It touted to bring Indian civilization to life. It has an architectural style influenced by unique artistic creation and a technological exploit of Buddhism, Hinduism, and Jainism. It illustrates the spirit of tolerance, which is a prime characteristic of ancient India. The Sculptures at the Kailasa Temple (image credit) The Vimana of the Temple (image credit)

We can say that the architecture of Kailasa Temple is remarkable. It has a Gopuram which is the monumental tower located at the entrance that leads to the courtyard. It has a dedicated pavilion for Lord Shiva's sacred bull Nandi, which they called Nandi Mandapa. Furthermore, a Gudh Mandapa which is a close sacred hall contains the shrine of Shiva. The Kailasa Temple has a main shrine divided into two parts: the Adhisthana in the upper part while Upapitha at the lower, which has large sculpted elephants. A rock bridge joins the Nandi Mandapa to the porch of the temple. 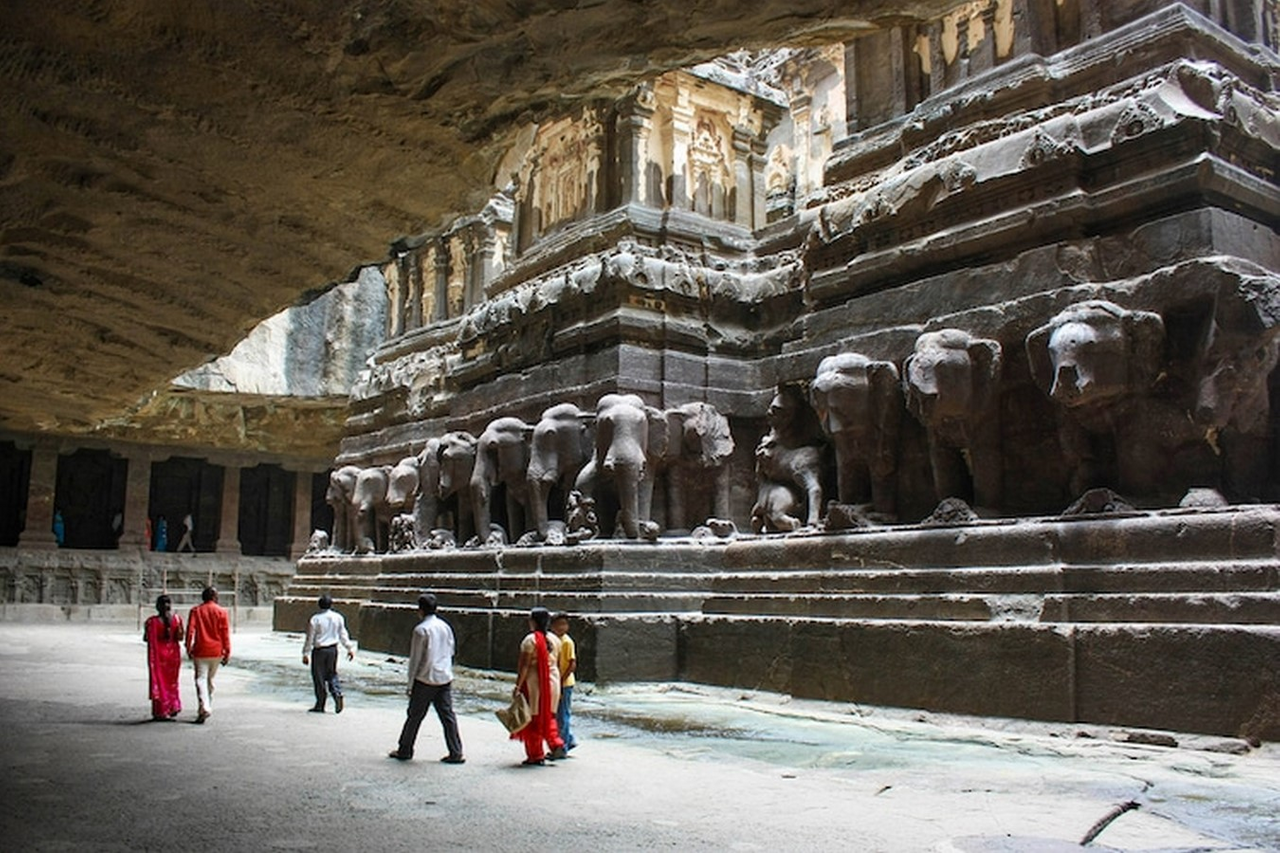 The Kalisa Temple has beautiful and intricate sculptures on the walls. It depicts deities of Hindu Mythology and scenes from Purana, Ramayana, and Mahabharata. Besides, it has a well-defined carve as a sculptor that shows the craftsmanship of the ancient Indians. They have chiseled the rocks for decades and softened the edges of the rocks to give them shape and form. It leaves us a jaw-dropping experience and leaves an indelible impression of the past.

Note: The cover image is created by the author using Canva.