Roman architecture: a walk through history [Curious representation of the god Neptune]

Like many other important archaeological sites that are located throughout the length and breadth of the Iberian Peninsula, the archaeological site of Carranque shows us that History, as Schliemann showed until finding the remains of the Troy described by Homer in the Iliad, it can be comparable to the different layers of an onion. [Through the site towards the Casa de Materno]

For your information, I will tell you that Carranque is a town that, although it is located in the vicinity of Madrid, belongs to the territorial jurisdiction of that 'capital of forgotten empires', as the German writer and poet, Rainer María Rilke, author, defined Toledo , among other works, of two important anti-war allegations, also brought to the big movie screens: 'No novelty on the front' and 'Time to love, time to die'. [Remains of the Paleo-Christian basilica]

Entering archaeological remains, which to a greater or lesser degree of conservation have survived to this day, also means having the courage to swim in turbulent waters, whose currents, metaphorically speaking, can make us shipwrecked in the unexpected whirlwinds of times, which as we will see, they were not as barbarous as history has shown us on numerous occasions. [View of the basilica and added buildings]

For this reason, I would like to invite you to allow yourself to be seduced by your imagination and try to place you in that fourth century after Christ, when architecture in Spain had unapologetically adopted Roman genius, such as the semicircular arch and the architects of the time, without undoubtedly influenced by their genius, they followed without blinking the teachings contained in the architectural treatises of Vitruvius. Some treatises, which until relatively modern times, were part of the subjects that all enrolled students and aspiring students one day had to study and assimilate. 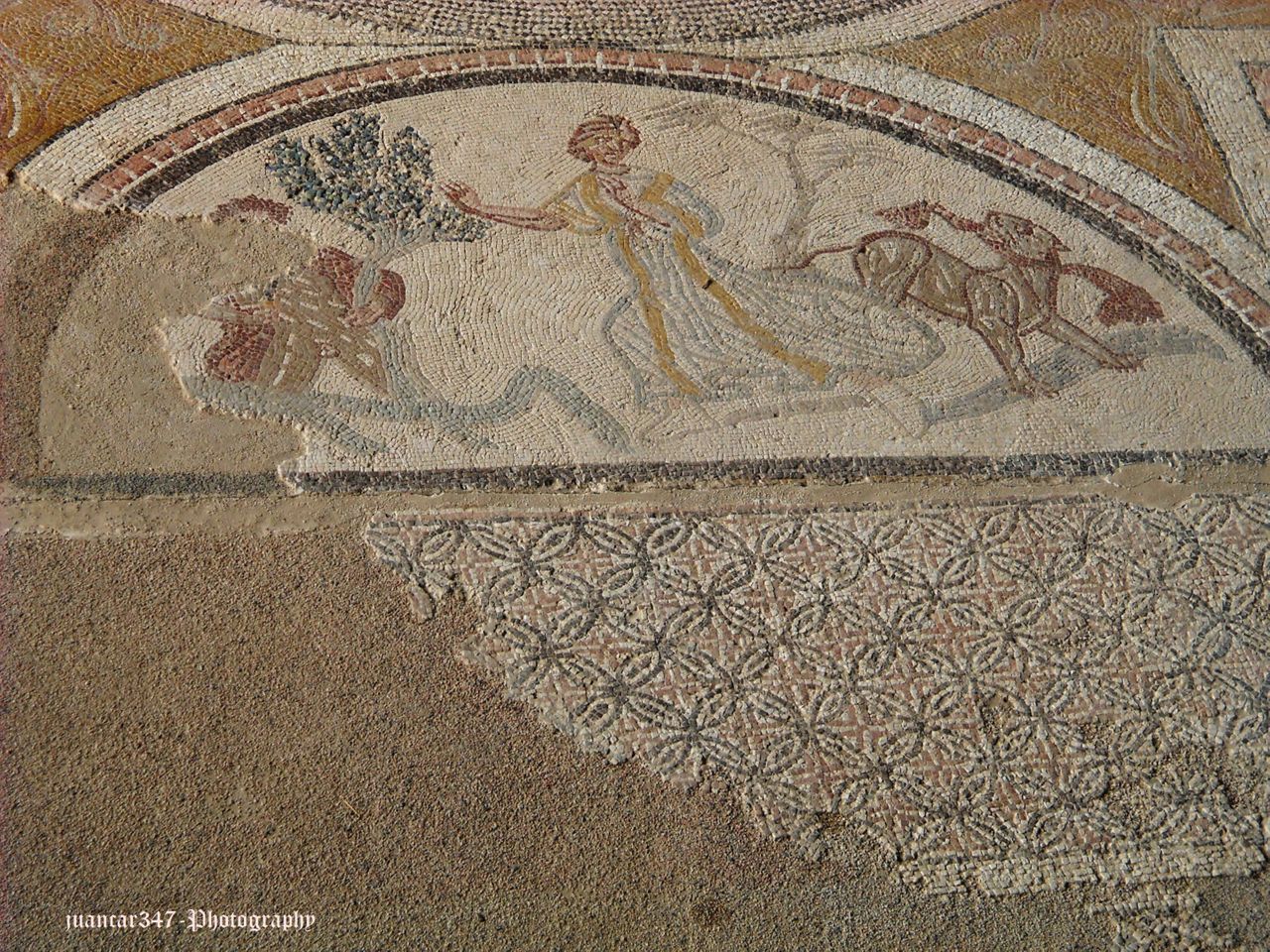 The masterpiece of this site and we enter with it in the matter, is the so-called Maternal House, in the vision of whose conception, little or nothing takes into account the appreciations of another theorist of Architecture, John Ruskin - remember his treatise 'The seven lamps of Architecture', converted, according to some, into the Bible of the pre-Raphaelite movement - when it insisted, fervently, that in it, that is, in Architecture, was the beginning of the Arts. [The death of Adonis]

Materno Cinegio, to whom the construction of the house that bears his name is attributed, I will tell you that he was the uncle of Emperor Theodosius I, father of the famous Gala Placidia, whose mausoleum, a true work of art, is located in the Roman town of Ravenna. The house built by Materno in Carranque, was large, calculating that originally it occupied an area of approximately 1,600 square meters, which was accessed by a porch supported by brick columns, next to which they were located, as it used to be custom in Roman villas of some relevance, two square towers. [General overview of the different rooms]

Like any Roman villa of its characteristics, it had numerous rooms, whose walls are supposed to have been decorated with a profusion of frescoes, which would allude, as shown in the rich mosaics on the floors, to different scenes and themes from Mythology, highlighting three of them, which are, possibly, the ones that have reached us in the best conditions. These were none other than the so-called Maternal cubicle or room, the ‘oecus’ or large reception room, which had a beautiful hexagonal shape and a rectangular room, called ‘Triclinium’, equipped with an exedra on a dais. [Partial view of the hall]

The house also had all the comforts, since the heating system that the Romans called 'hypocaust' was also used, which basically consisted of an outdoor oven where the air that passed under a floor supported by pilasters and that was distributed by ceramic tubes, similar to chimneys, also having running water and drainage. [Another perspective of the different rooms]

Regarding the latter, it is convenient to know that the pipes discovered in this place were made of lead, a system that, as you know, continued to be used throughout the centuries and even today, if we had access to many buildings in the old neighborhoods. In many western cities, we would see that it continues to be used, despite having been superseded many years ago by the advantage - certainly not for the environment - of PVC plastic. [Originally, the center was occupied by a small fountain]

Spectacular, on the other hand, are the mosaics, which represent various mythological scenes, among which a curious god Neptune stands out, endowed with mysterious horns, superbly and handcrafted, piece by piece, where it is known, that as it is done nowadays, also at that time the artisans left their name, being in this case, by having discovered an inscription that confirms it, work of the workshop of a certain Máximo or Maximino, being Hirinio the name of the artist who made the paintings; In addition to the spectacular mosaic of Neptune, it is also worth highlighting, due to its significance and beauty, that one that represents the death of Adonis. To end this visit, comment, in relation to the comparison of an onion, by its different layers, that we did at the beginning of history, that next to the monumental town of Materno, the remains of different buildings and cultures have been found, like an early Christian basilica, a nymphaeum and different ceramic remains, of unmistakable Muslim origin. [Modern recreation of how the Maternal House must have been]