A car showroom in Sharjah...but its a Masjid.

In the previous post, I tried to show you how elegantly extravagant can the UAE get when it comes to Masjids. This time, however, I want to also show you the other side of the coin. Something down to earth, but still with the UAE touch to it.

This is the Qasr Al Sayarat Mosque. It is not a "Jami Masjid", which is where the Friday prayers are held. It is just a normal Masjid. Open for prayer at all times except the Friday prayer. There is a very specific reason I wanted to share this Masjid in the community. This place was a car showroom a few years back. That is where it gets its name from. "Qasim Li Tijarah AlSayart" literally means Distributor/Giver for Trade of Cars. Knowing the history of this Mosque makes the design that much more interesting.

The Mosque has since been renovated. It has been expanded a little, the dome has been turned green, and the outside of the Masjid has been lined up with bricks and an ablution hall. 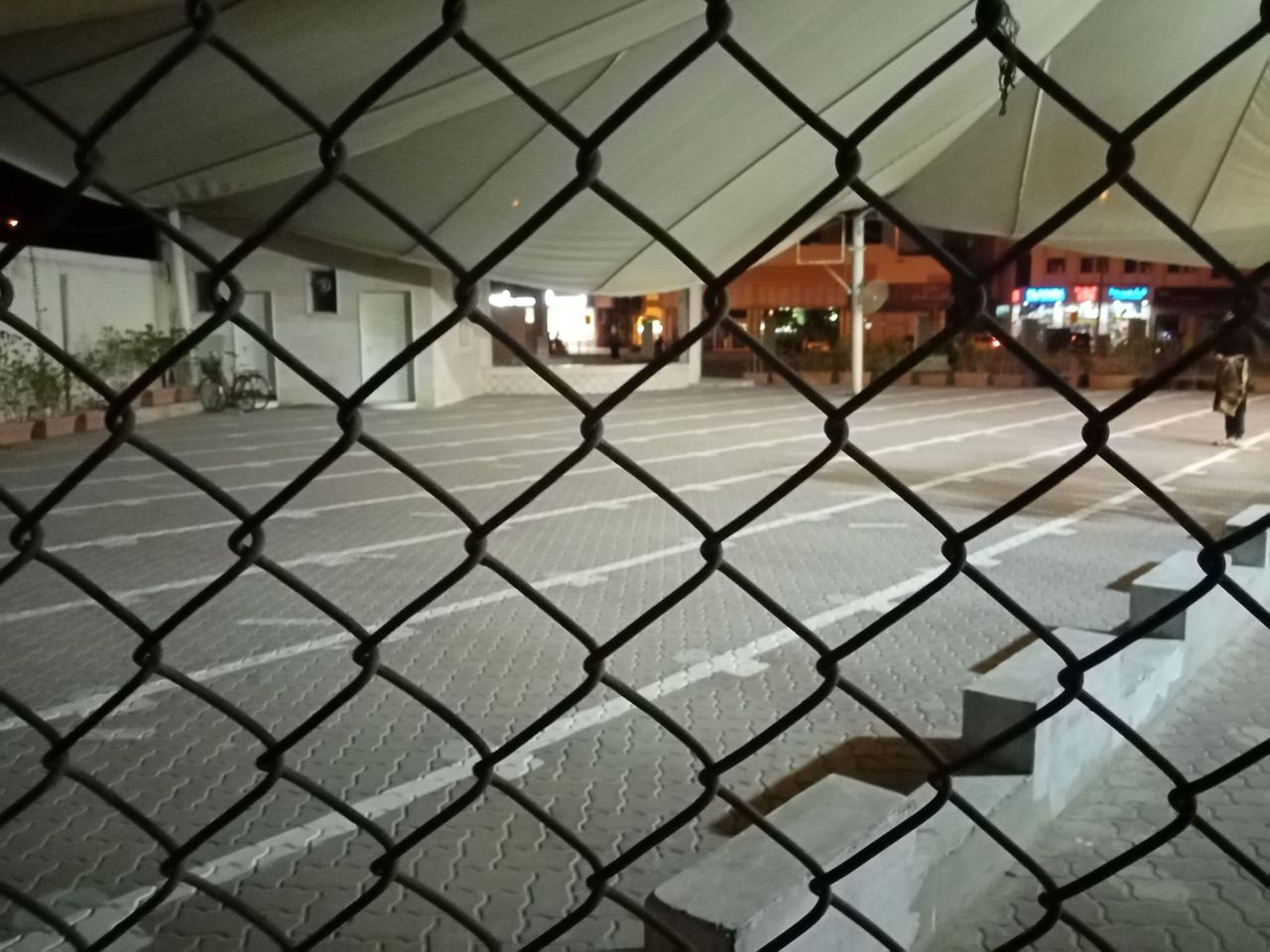 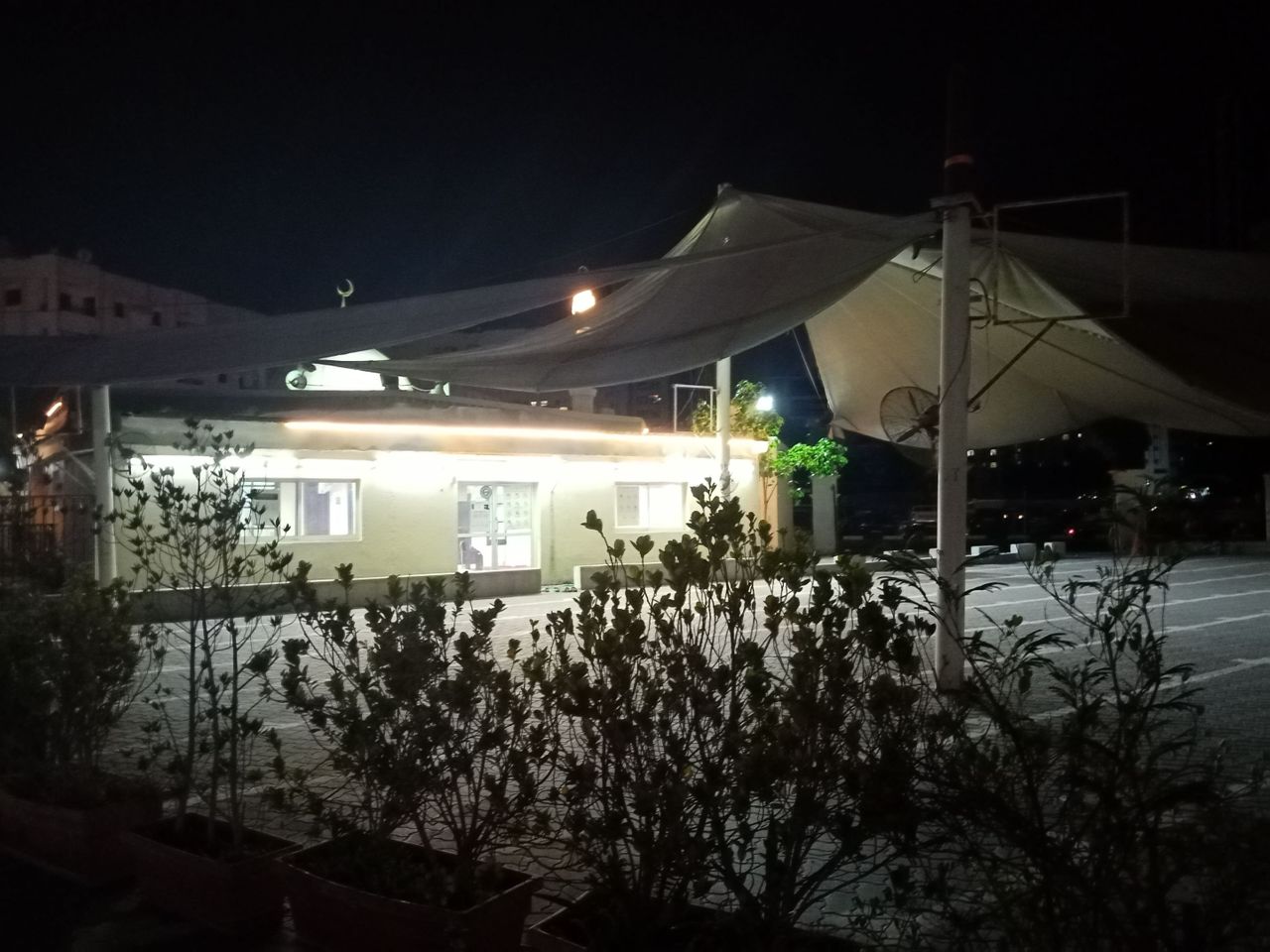 The empty spaces with white lines that are outside the main Masjid is where the cars used to sit. It was a huge showroom and the business has since died out. However, the place has been completely redesigned as a prayer hall.

The backside of the car showroom's office has turned into an ablution hall, the parking lot has been bordered with wired fence and plant pots to mark the area, and the Masjid itself has been enlarged to take up more space. 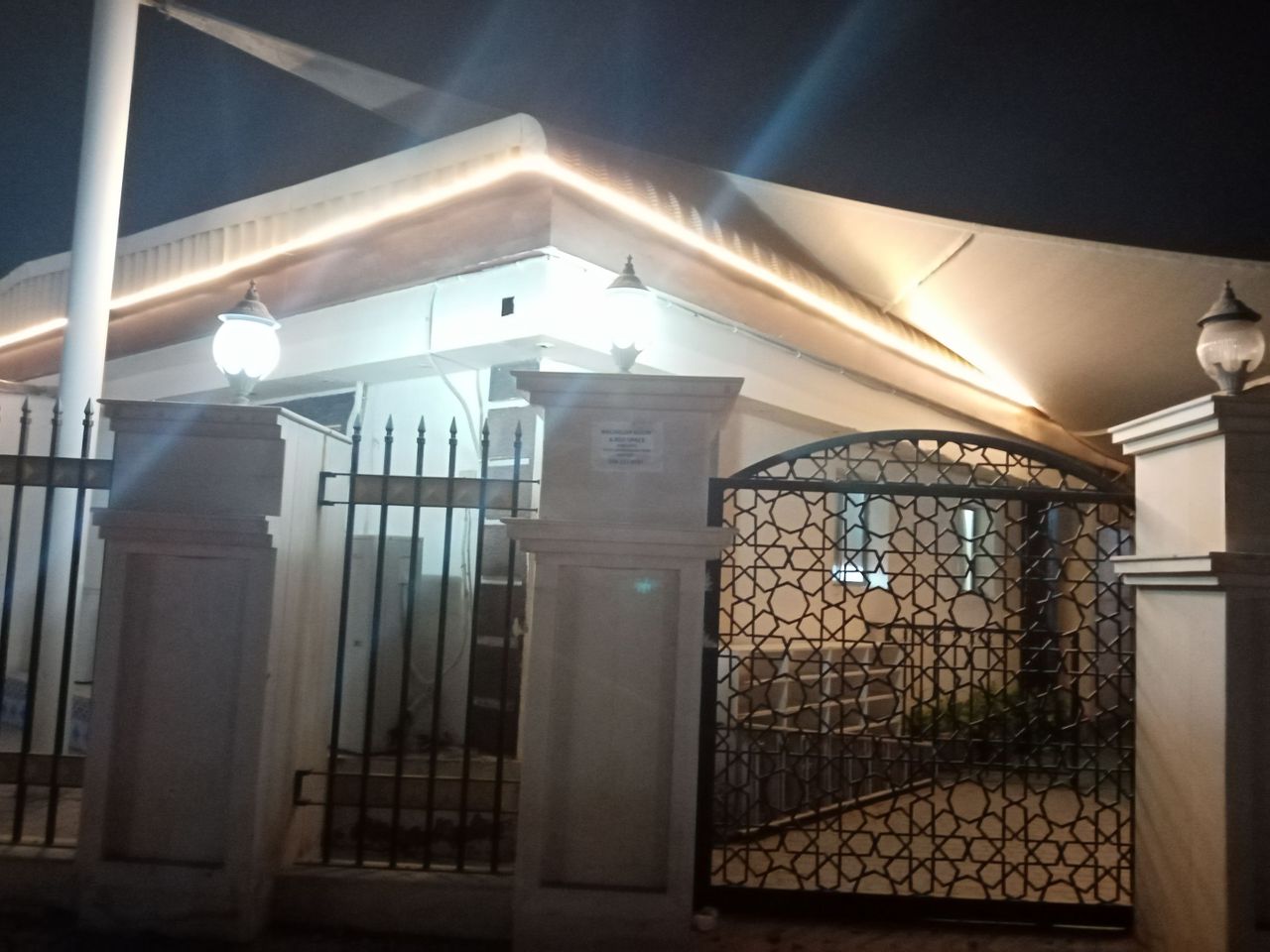 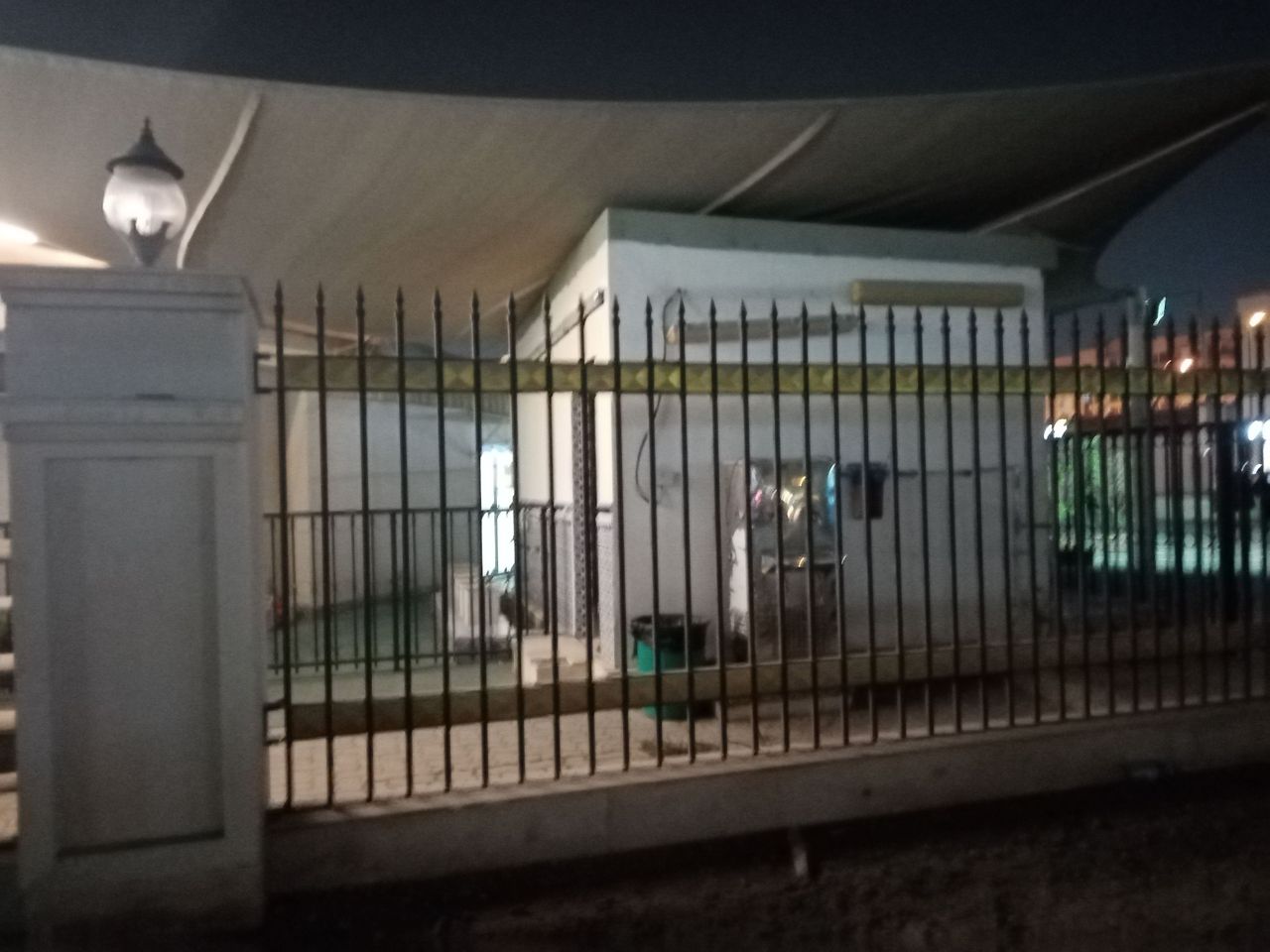 The outside fence has been given a facelift. These Arabic-styled metallic fences are often seen around Masjids and were not here when the place was more showroom less Masjid.

This type of fence is exclusively seen around Masjids and government office buildings. I am guessing this was installed by the municipality and that the Masjid is now under the caregiving of the government. Previously, it was handled by the car business that had built the place inside their own fences. 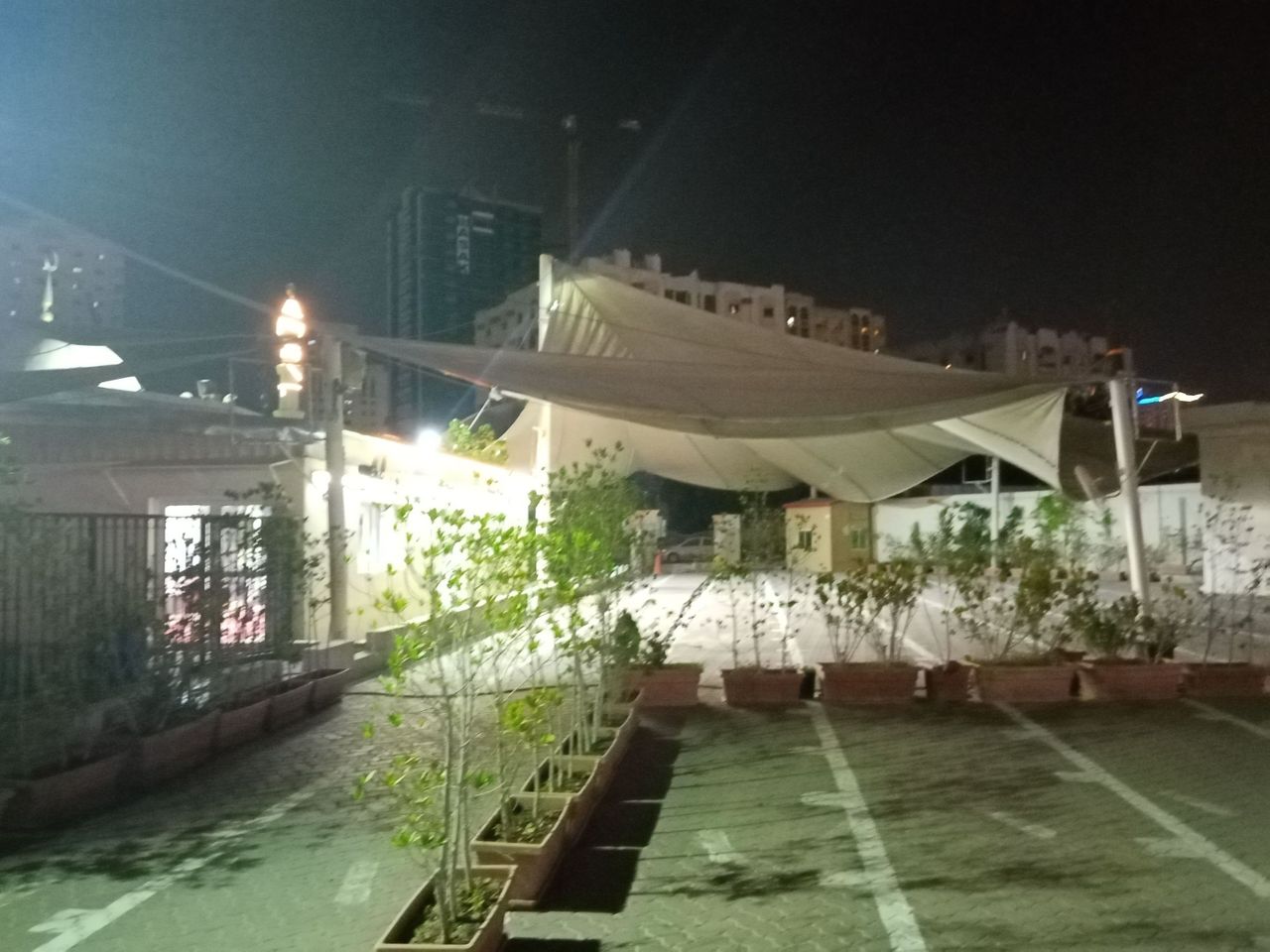 Below is the picture of what remains from the original car showroom. It is part of the main office of the business which is now left abandoned. Yes, it does add a little mystery and some pizzazz to the place. But it also feels very out of place at the same time.

I wanted to snoop around the office and see what had become of it. However, I refrained from doing so as it would be highly impolite. It gave me a colosseum vibe, but if you know what kind of architecture has this space taken inspiration from then please let me know. You can still find an image of the original showroom with the Masjid in it on google maps. It hasn't been updated yet.
I wonder if the shade above has been there because of the mosque or the business. It is an iconic part of Masjid architecture in the UAE given the temperatures. However, a lot of the car showrooms that had an opening showroom also install them.

Here is a snap I took from google maps to show you how it looked before. 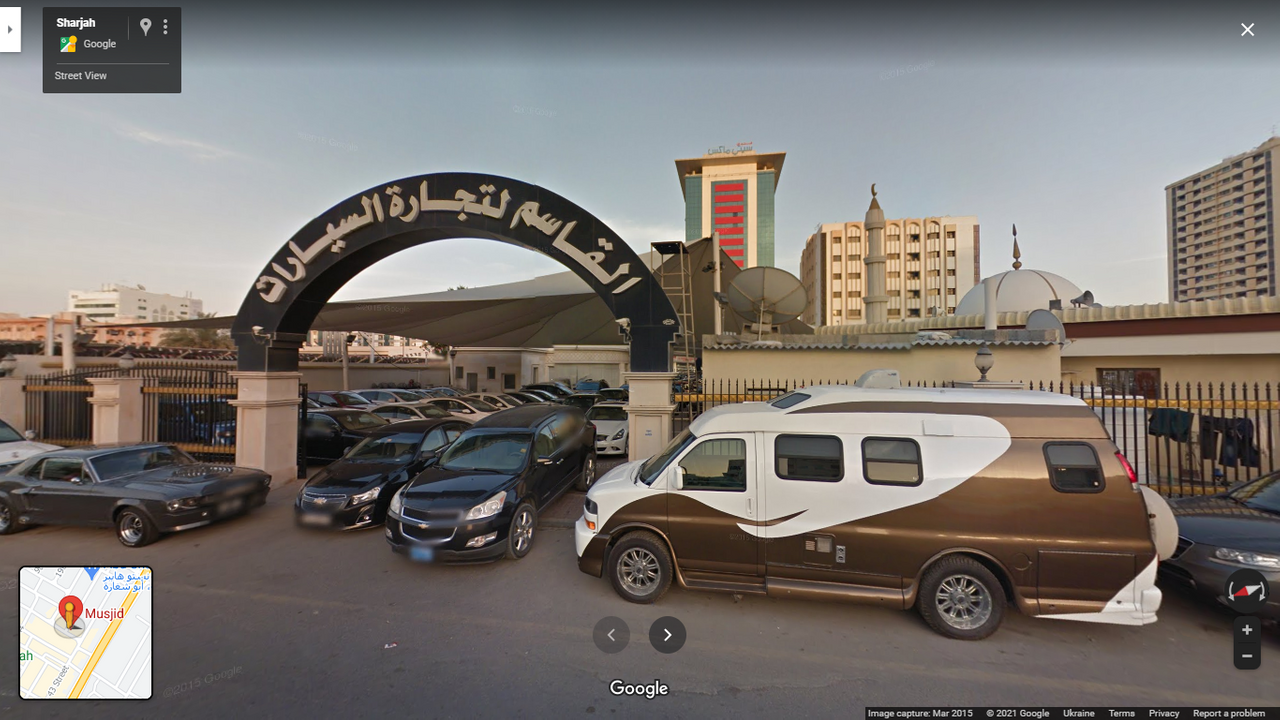