When I was very young, the greatest show in my life was Medrano Circus, full of clowns doing totally absurd, and sometimes even funny things under the colorful guises. As I was growing up, Harlem Globetrotters took over as the greatest clowns with a magic basketball tricks. In the late age, I have no better fun than looking absolute top of the comedy, ‘Buster Keaton’ type of clowns with serious faces and expensive suits — U.S. Congress!

Have you forgotten those Iowa Caucuses results yet? Are they still counting? Counting is not an easy task, you know. That’s why elementary schools exist. Iowa Dummocrats couldn’t do it without help of the DNC. But let me hold you in suspense about the results for a few minutes more, while we put all the events in context.

U.S. does not have two party system any more. Both parties, Republicans and Democrats, have split under the overwhelming influence of corporate money, and formed one party − Dummocrat&Returdlicans party − which is now running this great Country. Dummocrat&Returdlicans have one common policy without exception: More profits to their corporate masters, even if it means mass murdering people all over the World and in the U.S. That is the only drawback of this circus − it is not funny in the greater part of the planet.

Dummocrat&Returdlicans party cannot stand a candidates that does not want war (like Gabbard and Sanders), and is trying to remove them from their evil clown race, reserved for the ‘virtue’ candidates like that righteously corrupted Jo Biden or that Pete Buttgie… Buttegg… We’ll call him Pete Butt, it is much easier to remember and to put on election banner. First step was to hide true results from Iowa, just for a few days…

You see, in order for the ordinary ‘democratic deplorables’ (read: Sanders’ voters) to forget the Iowa caucuses results as soon as possible, it was necessary to take a few days of Dummocrat&Returdlicans show in Congress, Senate and media. For example, the next day you had a joint clown session of Congress, titled “State of the Union” speech, with all the domestic clowns in, and one guesting clown − Juan Guaido − who was not there without reason! We’ll be back to him soon. The Leading Clown of the Dummocrat&Returdlicans show has promised all the Imperial goodies impossible, including the funniest part ever — conquering of Mars!

“In reaffirming our heritage as a free nation, we must remember that America has always been a frontier nation. Now we must embrace the next frontier, America’s manifest destiny in the stars. I am asking Congress to fully fund the Artemis program to ensure that the next man and the first woman on the Moon will be American astronauts — (applause) — using this as a launching pad to ensure that America is the first nation to plant its flag on Mars. (Applause.)”

If you think that was the pinnacle of the show, you are wrong. From the Dummocratic wing of the party, leading Queen Clowness steal the show with this one simple move: 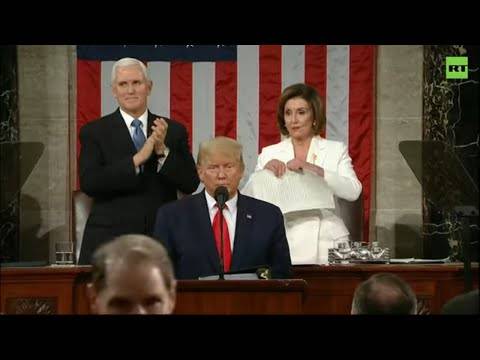 The same Dummocratic wing of the Dummocrat&Returdlicans party, suffered another humiliatingly funny blow the next day when U.S. Clown Senate voted to acquit the Leading Clown of all impeachment charges: As Jimmy Dore would say, “Dummocrats must search further for something against Trump that they were not complicit in!”

Did you forget about the Iowa caucus by now? Let me remind you if you did. And on the third day — since we still haven’t had the final results, and got only to 97% counted votes — Dummocratic National Clowns (DNC) chair Tom Perez, got angry and announced… …a recanvass? Recanvass of what to whom? Did he wanted to say recounting? Which elementary school did he complete? If any… How long will that… ‘recanvassing’ last? Until the DNC regains public trust? Or just until hell freezes?

Watching the Clowns in the Congress&Senate, voters didn’t even notice how the day has quickly gone, while rare of them were still waiting for the remaining 3% with the published 26.2% Butt and 26.1% Sanders. Make no mistake, it’s a democracy — the results must be published whenever! Next year if that is needed for a careful counting and engaging all the elementary school kids in Iowa! But today, we finally got the final results! And guess what: It is still 26.2% Butt and 26.1% Sanders! Yes, Sanders won the popular vote by landslide (there are precincts witnesses who claims 6000 victory)… …but who cares? Who ever objected that Hillarious Clownton won a popular vote in 2016? Nobody, right? Butt declared victory knowing what he is doing, so he is the right gay… guy for the next Clown candidate. Now it is only necessary to cover up the remaining 3% of the results… if those pesky activists who have the actual results and the Caucus Math Worksheet allow it: Calling the Guaido as a guest Clown of SOTU speech with both Houses present, was no mistake at all. He was a Butt before Butt started his campaign. He self-proclaimed himself a Clown President of Venezuela, and − quite naturally − all the U.S. Clowns recognized his self-election. It’s a precedent for Butt to self-proclaim himself a winner of the Iowa caucus, and if the sheeple swallow that precedent, why not self-proclaim himself a winner of the candidate race in advance? And why stop there? Why not, in a final step, proclaim himself The Leading Clown of the United States? That is far simpler and cleaner from this messy counting and giving money to the incompetent intelligence programmers to create some poor apps that Russian kids can tear apart as soon as the get their hands on a smartphone. Just think of consequences if the Butt declares himself The Leading Clown…

First, we have to know who Butt is: He is a declared homosexual from South Bend Over in Indiana… OK, you won’t believe it anyway. Better let him present himself, and evade homophobia accusations:

“Pete is the son of Joseph Buttigieg, a first-generation immigrant from Malta, and Anne Montgomery, a fifth-generation Hoosier. They raised him in South Bend, Indiana, in the same neighborhood where he lives today with his husband, Chasten, and their rescue dogs, Buddy and Truman.”

“…with his husband, Chasten…” Thank God! Imagine America with a First Lady named Chasten Glezman! And since we are at self-proclamation, Butt could also proclaim himself the first woman president of the United States, and go straight to history! Why should some Frenchies have ‘The Greatest Show in the World’? This is America! You think this is impossible? Never forget that Dummocrat&Returdlicans party is tripping to Mars, why would be impossibe for them to proclaim their Juanita Guaido for the next Leading Clown? All they need is some more of Soros’ money!

Farewell dear Medrano! You are not even close to ‘The Greatest Show in the World’ any more! Of course, the life is full of surprises, and their plan must be absolutely fail-safe. There must be no surprises, like for example: What if under pressure of an angry mob, the true results about a major victory for Bernie Sanders come out? What if there was even a threat of the possibility of Bernie Sanders becoming a contender to Donald Trump? Sanders could win, and that may be an end of the Great Dummocrat&Returdlicans clown party, and a restoration of a decent world! That must not be allowed! In that case, there is an easy safety mechanism: You only have to scream from the top of your lungs: