Local News Company Denying the Facts of the COVID Mandates

nateonsteemit69
2 months ago
in500 Words a day 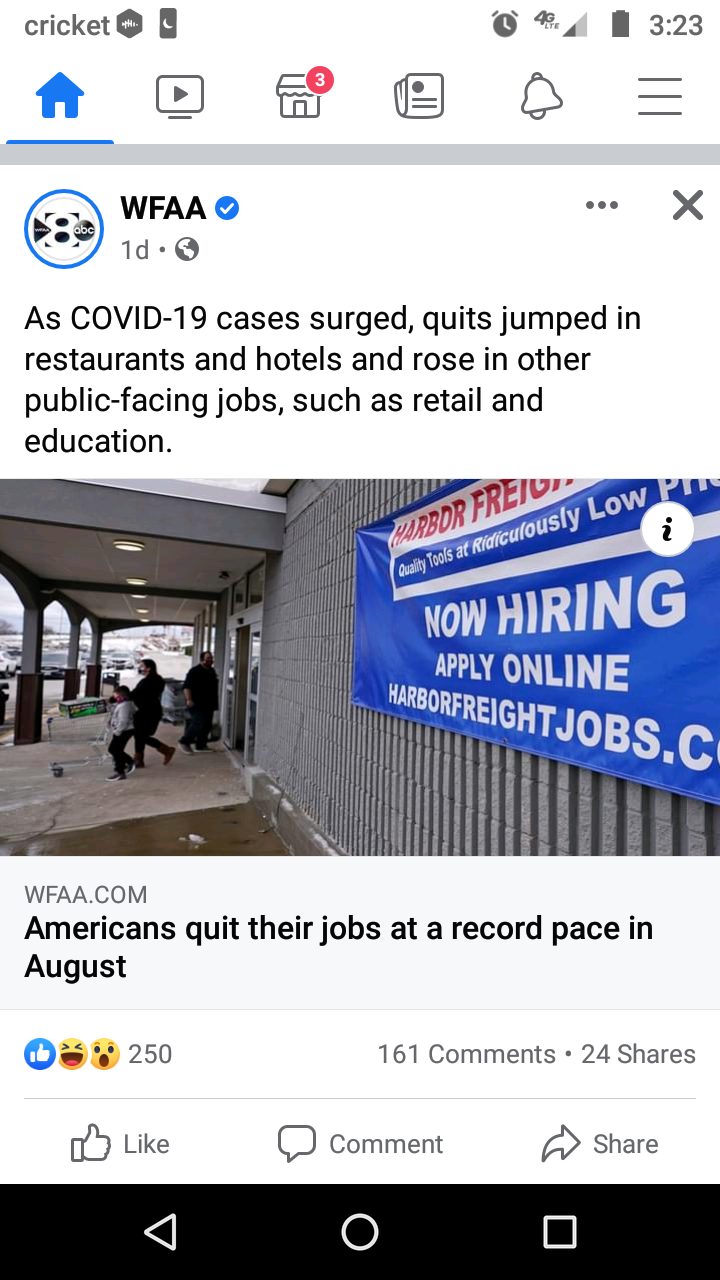 I was an on my wife's Facebook tonight after work and this gem was right on top of her feed. I put aside my preconceived interpretations of the tone of the story and decided to give it a chance. Well, that was a mistake. I was right. As usual though, the comments were a huge white pill.

They totally claim that the crashing service jobs indicate that people are quitting their jobs in fear of the delta variant. They make no mention of the fact that maybe a terrible $2.50 an hour job waiting tables isn't worth compromising a person's conscience... Yeah guys, it couldn't POSSIBLY be the mandates that are being shoved on folks. It's totally purely the fear of the boogeyman du jour.

Good job WFAA, way to keep in touch with the public. Continue to pander to the narrative, it'll work out great for you. This Christian patriarch has just cancelled you in his home.

The wife told me the other day that she saw a statistic that "less than 1% of the workforce is quitting over mandates." And work blasted the figure of "65% of people in the US are vaccinated." These numbers sound purely false to me, used to manipulate and belittle people for taking a stand against this global power play. I know at my company that four of my previous co-workers just put in their two weeks notice this week after the company decided to bend the knee and announced their intent to cooperate with whatever rules OSHA outlines for vaccine mandates. One other lady submitted her retirement effective immediately. Myself and a handful of others are going to stick around and make them fire us for non-compliance, and we're all running side gigs right now to replace our jobs. In a way, it'll be a relief when they let us go, cause we'll be working one less job then, and getting more rest. I hear that's good for the immune system. Just with the rumors and the people I know (I know less than an eighth of the people at our company), we're nearing one percent at our branch of this fortune 100 company. I bet we take over ten percent of these folks with us when we exit this paradigm. Don't let the public narrative numbers get you down, they have every incentive to inflate their numbers and downplay ours.

I listened to a podcast tonight from James White, a reformed preacher here in the US, talking about the sacraments of the state. I've spoken with exactly that language many a time when I assert that the state is a religious entity with its own worship services, its own saints and martyrs, and its own sacraments. He turned me on to a project in Australia called the Ezekiel Declaration, where a bunch of Australian Christians are asserting their religious right to protest tyranny and using excellent and direct historical precedent that I didn't know existed. How much better does it get? Y'all give it a read, this is groundbreaking and encouraging information for Christians and other friends of liberty. Remember:

"Resistance to tyranny is obedience to God."
-John Knox, Scottish reformer and preacher

Y'all have a good whatever time of day it is that this finds you. I hope to use this platform for a little bit more commentary and documentary than I have in the past. Someone needs to record this stuff for posterity. I'm off to bed.

His will be done,