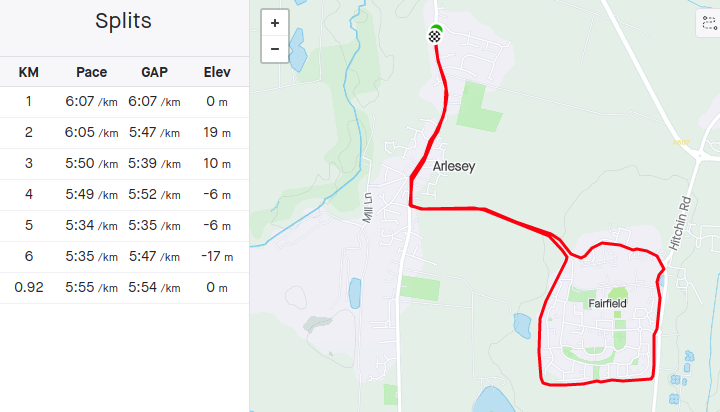 Well the route looks like a tadpole or a sperm. It was slightly warmer than Tuesday, but I still went with gloves. I could almost do this route blindfolded, but that might make crossing roads hazardous. There was a fair bit of traffic on the main drag, but the side roads were clear. There was a red kite circling over the WI hall, possibly looking for a Victoria sponge to swoop down on.

Then it was the slog up West Drive that I have done so many times. There is obviously some construction work going on up there as there have been lots of vehicles parked by the place half way up with some guys in hi-viz. I think it is a nursing home or similar.

My legs started tight as usual, but were loosening up a bit by the time I got to Fairfield. I went anti-clockwise and saw a friend walking his dog. I am sure all the hills must do me some good, but it feels hard. I just have to keep on pushing.

Coming back down West Drive, with some extra speed, I spotted a woodpecker on a tree. It flew off as I got close. I saw a few runners out, some more than once as they were going the other way around the loop. I kept up the pace along the High Street back to home.

My average pace has been nothing special lately. It feels like the fronts of my thighs are tight and my legs just do not move as well as they did a few months back. I am still able to run, but my progress has stalled. I do some stretching before I go out, but it is not making much difference. I will keep on running as long as it is not painful or feeling like it is doing me harm. I think my heart and lungs benefit.

Run free and stay well.
Check out some detailed info at my EXHAUST page
Join me in testing out EXHAUST!