Do Tiger-Fish and Hippo-Fish Get Along? A Collage for LMAC #77 It would appear from my collage, created for LMAC #77, that tiger-fish and hippo-fish do get along. At least they do in my mythical universe. However, in the 'real' world, the tiny 'hippo fish' (otherwise known as the flamboyant cuttlefish) is not such an agreeable creature. Nor is the tigerfish

The Flamboyant Cuttlefish (The Hippo-Fish)
Check out this YouTube video of the flamboyant cuttlefish in action: According to the Dallas World Aquarium, it is not know for certain if the bite and ink of the flamboyant cuttlefish are toxic. Research is being done to see if they are poisonous. However, the flesh of this fish is poisonous. It is a skillful hunter, with eight arms that are equipped with tentacles and suckers. Because of its small size (2.4-3.1 inches, not including tentacles), its prey is small animals. This cuttlefish probably earned the title 'flamboyant' because of its ability to change color. It changes color for camouflage when hunting prey, and when eluding predators. It is thought that the more vivid colors displayed are a warning to predators that its flesh is toxic. 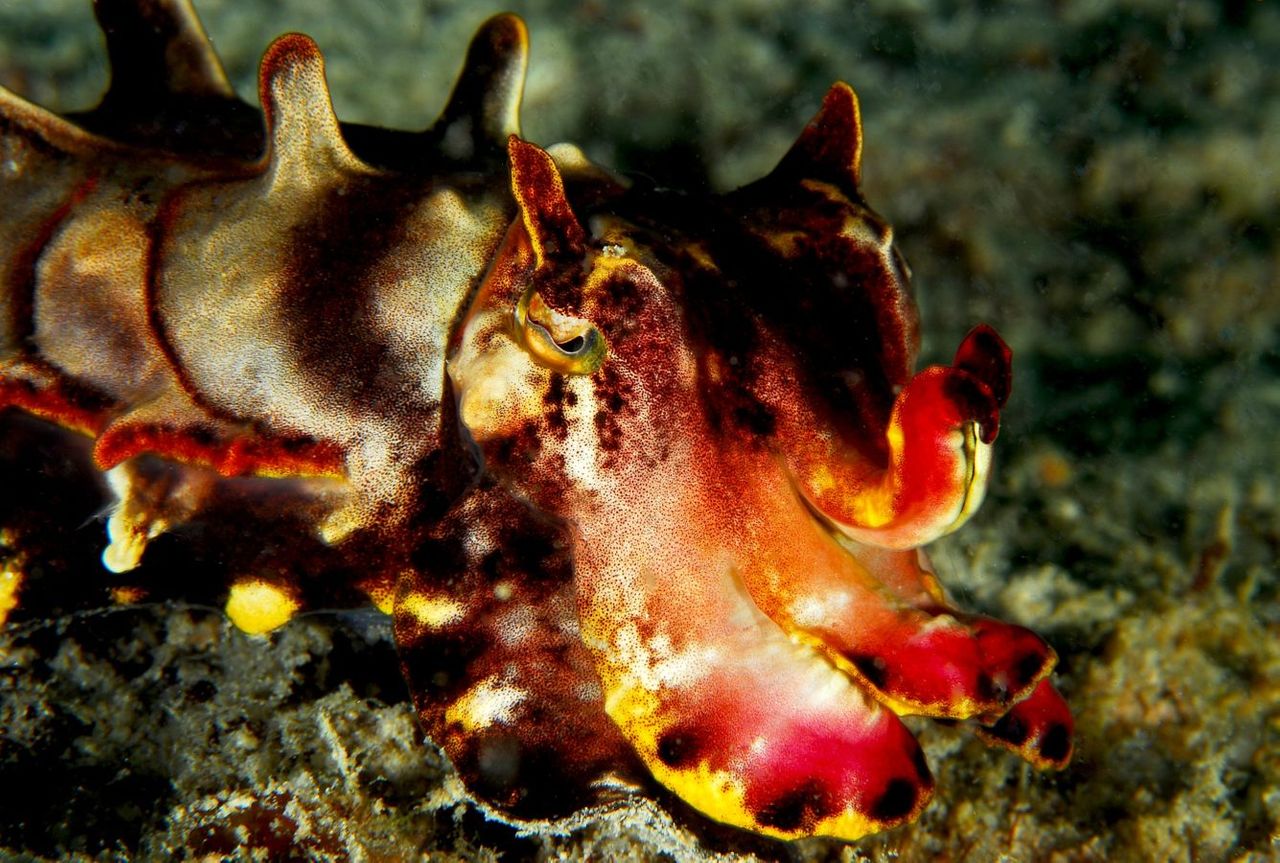 Image credit: Jenny (JennyHuang) from Taipei. Used under a CC 2.0 license. The caption under this picture describes "Wave upon wave of bright yellow,white,chocolate brown and vermilion flashing neon-like on its stubby body".

The Tigerfish, a Toothsome Hunter 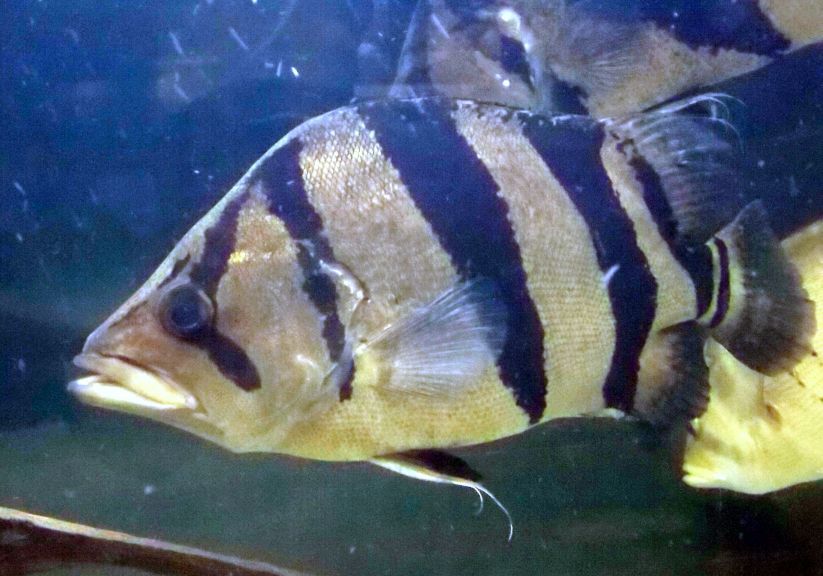 If you are looking for a companionable tank mate in your aquarium, this fish is not a good candidate. The New Guinea tigerfish is quite aggressive. If it meets anything half its size, it will likely make a meal of its new companion. These fish like to ambush their prey, and will hide behind plants in order to leap out at anything that passes by, even if it is not dinner.

There are other species of tigerfish. The one pictured below, Hydrocynus Vittatus, is at least as ferocious as the New Guinea tigerfish.

According to Wikipedia, though this animal consumes mostly fish, it has been known to leap out of the water and seize barn swallows in flight. The U. S. Fish and Wildlife Service describes its range: "sub-Saharan Africa from Senegal to Ethiopia, and south to South Africa.”

The Wildlife Service also describes the maximum 'published' weight of this freshwater fish as 28 kilograms. The Hydrocynus Vittatus is, according the Fish and Wildlife Service, "One of the largest and most fearsome predatory fish species found in Africa’s freshwater rivers". 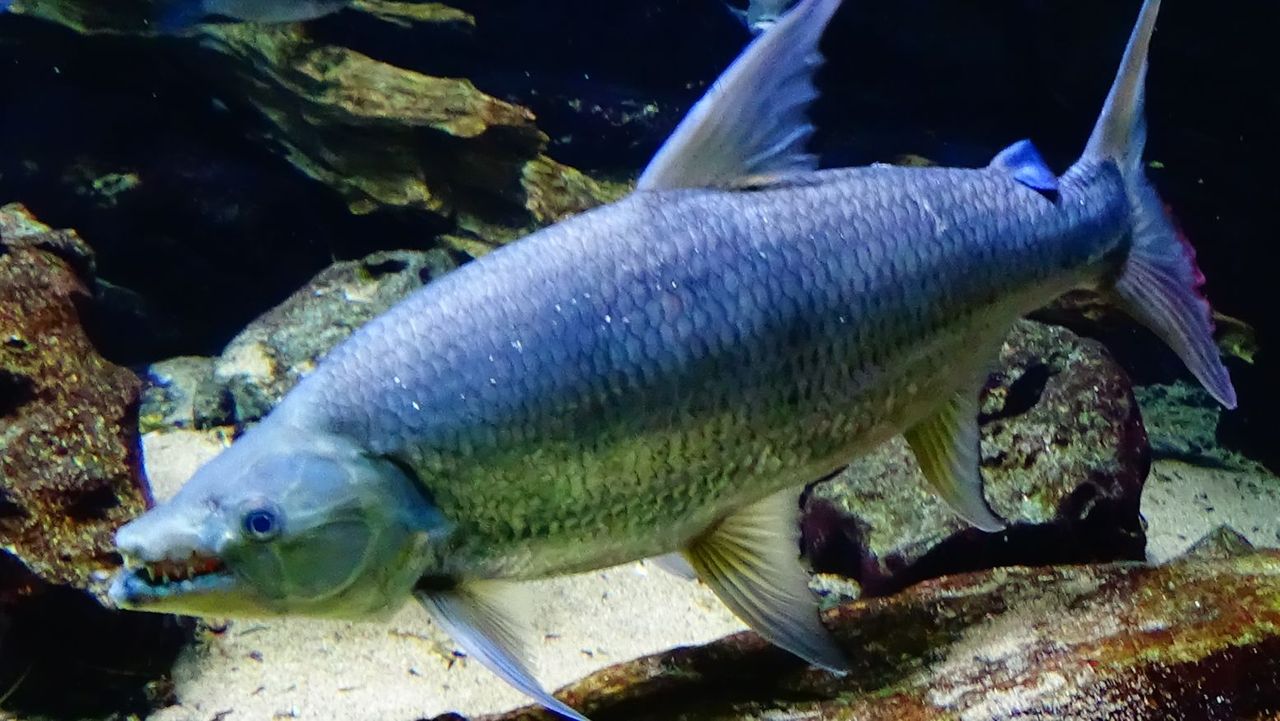 When it comes to ferocious, though, maybe this critter takes the cake. According to Animal Planet, this fish, which may be found in the fresh waters of the Congo River, may reach a weight of 154 pounds. It eats small crocodiles and has been known to attack humans. Here's a close-up of its teeth:

Teeth on a Goliath Tigerfish 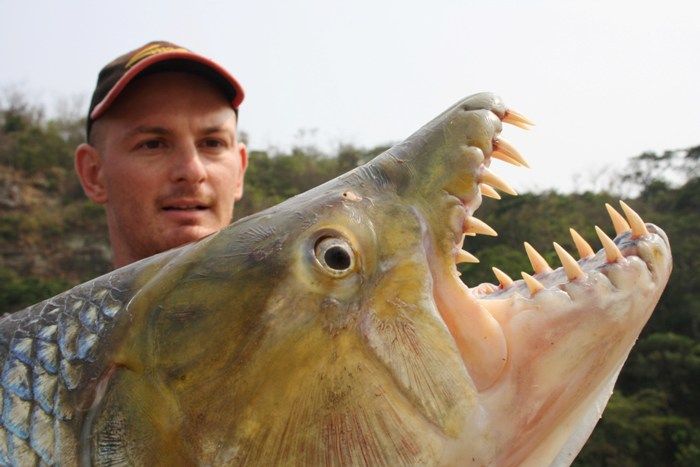 It would seem, from what we've learned about the hippo-fish and the tiger-fish, that they would not be dining companionably in real life :))

I tried making a process GIF, as @quantumg does. Unfortunately, my process is so chaotic that the GIF makes no sense. Mind you, I left out more than half the steps :)) But here is the GIF, if you want a chuckle:

My elements all came from @shaka's original beautiful picture: The sky I colored in myself (couldn't get that right) and I changed the colors on most of the objects so they would complement each other.

Thank you @shaka for all the work you put in. And thank you,LMAC community, for inspiring me, for doing the creative work that brings me back each week. Readers of this blog, join in the fun. The rules for this contest can be found on @shaka's blog. We have a school, run by @quantumg--our patient and skilled teacher/colleague. And we have a Discord channel, where members of the community connect with each other. Please check out other collages at our community site.

Thank you for reading my blog
letsmakeacollagesciencenatureanimalsartproofofbrainbiologyecology
agmoore69
via peakd/2021.04.2
$ 11.96
164
26 Comments