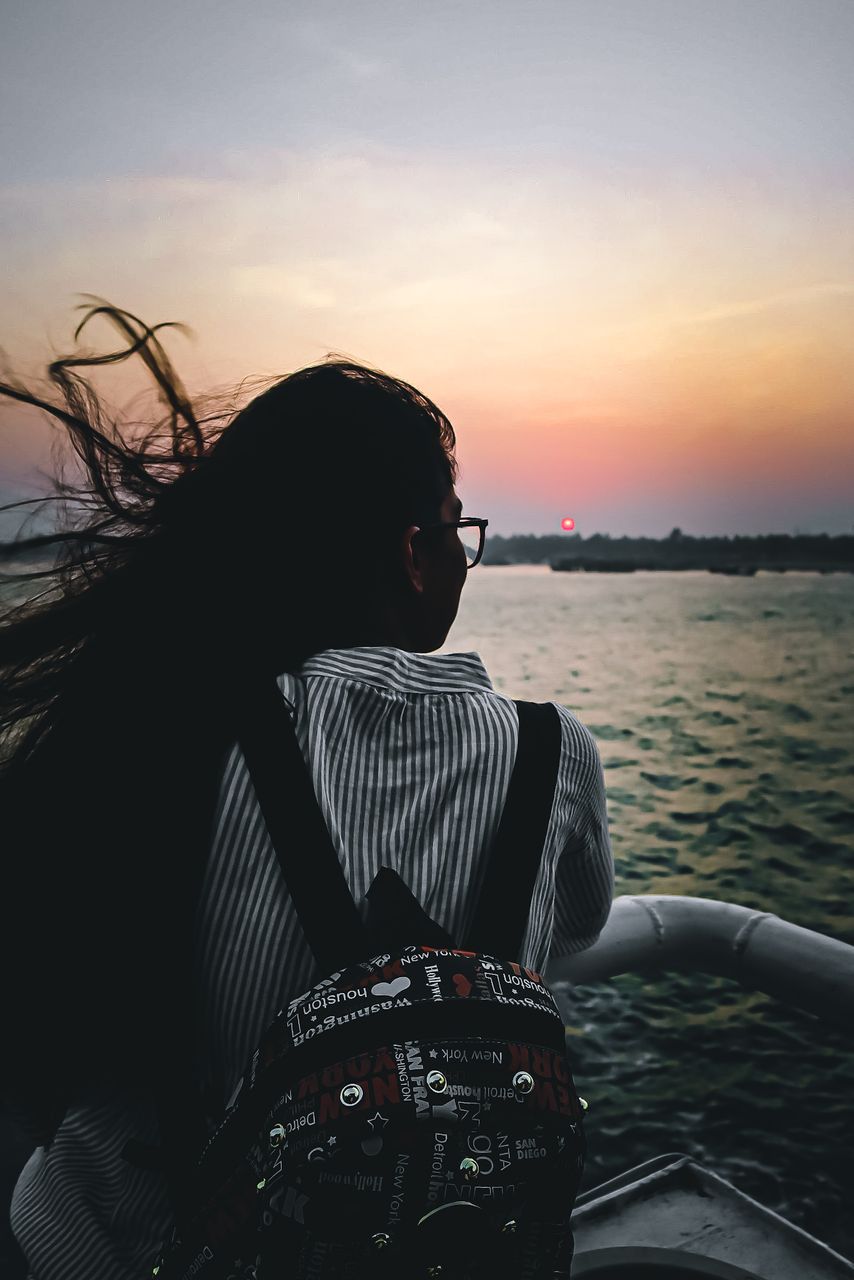 Leaving the island that day for me proved to be very difficult. I came here as a man of subtle virtuoso, and I left with a crack in my ever so fortified morality. For a moment there, I thought I should let go and let the everlasting oceanic breeze take away all of that is evil in me. But that never happens. As the sins of the father's trickles down to their sons, so does the cowardice. And mine had a one-tonne grip over my soul. The sinner in denial who had boarded the ship left the island unchanged, unmoved even by the vastness of the far-spreading sea, whose greatness shatters even the toughest of the vessels at will.

The first time I had laid my eyes on that always curious graze of yours, I was confused. To see someone like you in the arms of my friend, whose only purpose of living in the world was to buy the most hefty priced shoes, I was dumbfounded. Did you, too, let yourself go with the flow of urban dames seeking money or were you so desperate to be in a relationship where you could always be the one wearing the shoes? The answers to these questions, I never found out. That day when he introduced you to our friend's group, I could notice the aura of your freedom-loving soul. I couldn't make sense of it that day. I still cannot make sense of it to date.

Her grip wasn't as tight as she thought it was, it seemed.
Blood red palms holding onto blood-red promises she never could keep.
They couldn't hold it in anymore
The hope,
The faint shimmering light of something bright and beautiful
The everlasting illusion of a happily ever after,
It was never hers to keep.
And it flew right out of her ever shaking fingers like vapour.

But I had really met you at a much later point, on that ship taking us to that island. We were in the middle of a game when our cigarettes had run out. That was my turn to shuffle, and I have never managed to play it well without the presence of a Benson pressed against my lips. I came out of the cabin, and there you were, coming from the opposite direction, all lost in thoughts. As you passed beside me while I walked towards the exit of the deck, the potent pheromones had made me all dizzy, breathless, and exasperated for oxygen, and then, I got lost. Like a blind man in a horrifyingly quiet corridor, I walked towards the exit with lost steps. And a loud bang had let me know I had missed the door. Instead, I had hit the bar that held the door head-on. I knew you had immediately noticed my clumsiness. And so I had to turn around to cut in the embarrassment with a weak smile on my face. But, in reply, you had gasped. It took me a moment to understand the causality of the opposite reaction than to what I was expecting. When the blood actually had managed to take away my visibility while dripping down and covering my eye, only then I understood.

Ask her a story she'll say that she knew nothing.
But her existence would tell you otherwise.
It showed that she knew just too many of them
Too many unuttered uncertainties and answers,
Too many tragedies and heartbreaks she never spoke of
Too many long silent nights with agony so deep it cut harder than a blade ever could
-The Small Bird With A Red Tail

In the following days, I had become much quieter than usual. The vigor that I had collected once for this long-awaited trip, I had lost all of it completely. The thin hairline fracture over my eyebrow wasn't hurting as much as the guilt was vibrating and shattering my being. I asked myself again and again, what was I doing? What were those strong surges of emotions that I felt? All of the answers to those questions were drawing one single conclusion. Which was wrong in so many ways. This was my friend. My friend, who, even after being who he was, never had been unkind to me. And there I was, thinking about his girlfriend and how I could justify the feelings that overwhelmed me. I was fantasizing about telling you all of my secrets. My dreams, the lucid dreams that I get, that not another soul in this universe knows about. I was once back again at those crossroads. The road had split into two in the dark and bleak bamboo forest. The right one led to this clearing, the shape of which gave away it being man-made. And the left one leads to this ancient monastery. The door to which always remains locked. No matter how much I tugged on it, bashed it, it had remained invincible. Maybe you had the key to open it. Perhaps that's why I had felt the irresistible pull towards you.

The day we were leaving, when we boarded the ship for the last time ever, together, I was happy. The moments were becoming tougher more and more. I was getting released from this island that had turned into a prison. At least I wouldn't have to look at you two holding hands anymore, which was a bit of a relief. On the ship, I had found myself a quiet corner from where I could end the trip without being in pain anymore. I had taken my camera out to capture the final moments of this haunting period of my life. I thought I was alone until you two had found me. I shrugged and presented myself as being uninterested in front of him. He had left After a while with the others when being unable to thrash his taunts on me anymore. But you remained, why did you? Had you picked up a hint or something? As my left hand had dangled along, resting without any purpose, I had felt something.

A touch. Something warm had slid into my fingers. I knew what it was. I could smell it. That maddening cologne again. In a split second, I had decided not to look. Not to give in. or else it would have not ended well. You understood that too, right? You understood that I was unable to give you what you had deserved? You must have thought I was a coward. But you held on. From when the final reddish rays of the sun had disappeared till the vague silhouette of the Milky Way hung on top of our head, you didn't let go. And then I felt the warmth leaving. The touch that I could feel to this day had made me well aware of what was not meant to happen. As your scent slowly diminished in the wind after you had left, and I was standing all alone under the million stars, I had realized it. I had understood that sunsets are overrated.

sunset is overrated , people take pictures of sunset for no reason, they should look in the opposite direction, where the light of setting sun shining- Baba Fat