It is technically the end of winter as far as the months go and today does feel like spring, with the sunshine warming the ground, melting the snow and creating puddles on the ice on the lake. The first image is of the cracks in the surface, which are a bit off putting, but the ice is still very thick, although it is wise to stay away from where water flows underneath.

There weren't many people out on the lake though, so we figured we probably shouldn't be out there either. Next week it should drop back down well below freezing again, so the ice will thicken up a bit. I was actually meant to be on holiday next week, but I have decided to postpone it as it would just be me and we are going back into ridiculous lockdown, so people are getting weird and I'd end up just at home pottering around - writing posts. Pretty much every time we go outside, we end up at the park with Smallsteps as she likes to swing. We weren't there long today though, as we went on the way through to the lake and she was more interested in getting out there in the sled instead. It isn't really sledding weather as on the pathways the sand and gravel is showing through and it destroys the bottom of the plastic sleds. They aren't expensive, but there is also no point in destroying them. We have had ours for three or four years I think. 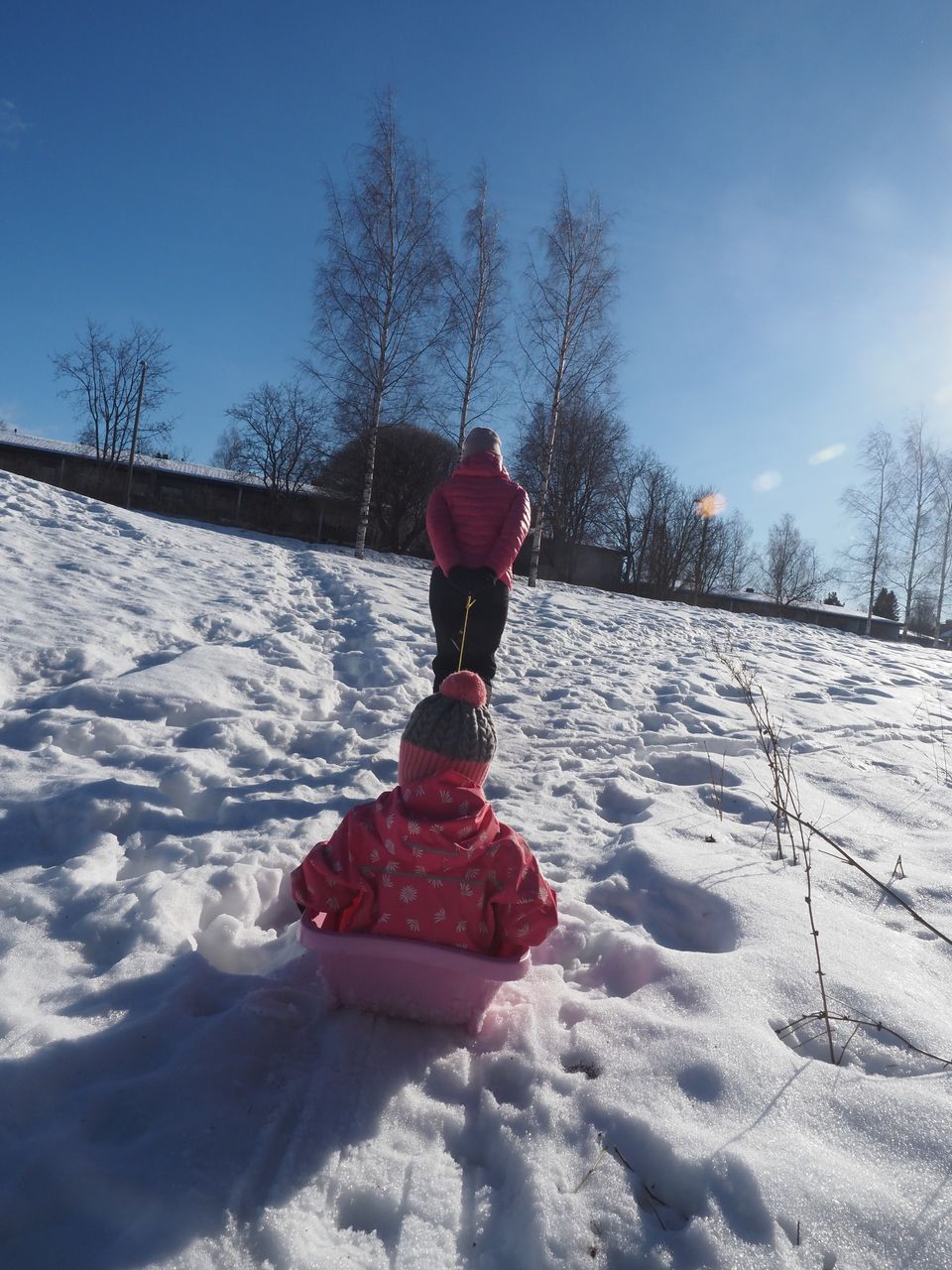 And this is something we will unfortunately have to do a fair bit of soon - wash the carpets. This is kind of a weird thing for many people as carpet washing doesn't happen in most places. When @galenkp was here a few years ago, we made him do ours.

It is actually kind of cool, as while the work sucks, the carpets/ mats look and smell much nicer. In Finland, wall to wall carpet is very, very rare, so it is generally mats on hard floors. Also, no one wears shoes in side so things stay relatively clean, but still, dust builds up, fireplaces create smoke etc, so freshening them up is both nice and keeps the carpets usable for much longer.

These pictures are from our local mat washing station, which are generally located in most suburbs near a lake somewhere. The wooden frames are for hanging the wet carpets and in the summer and when there is a day of two of guaranteed good weather without rain, they are full. 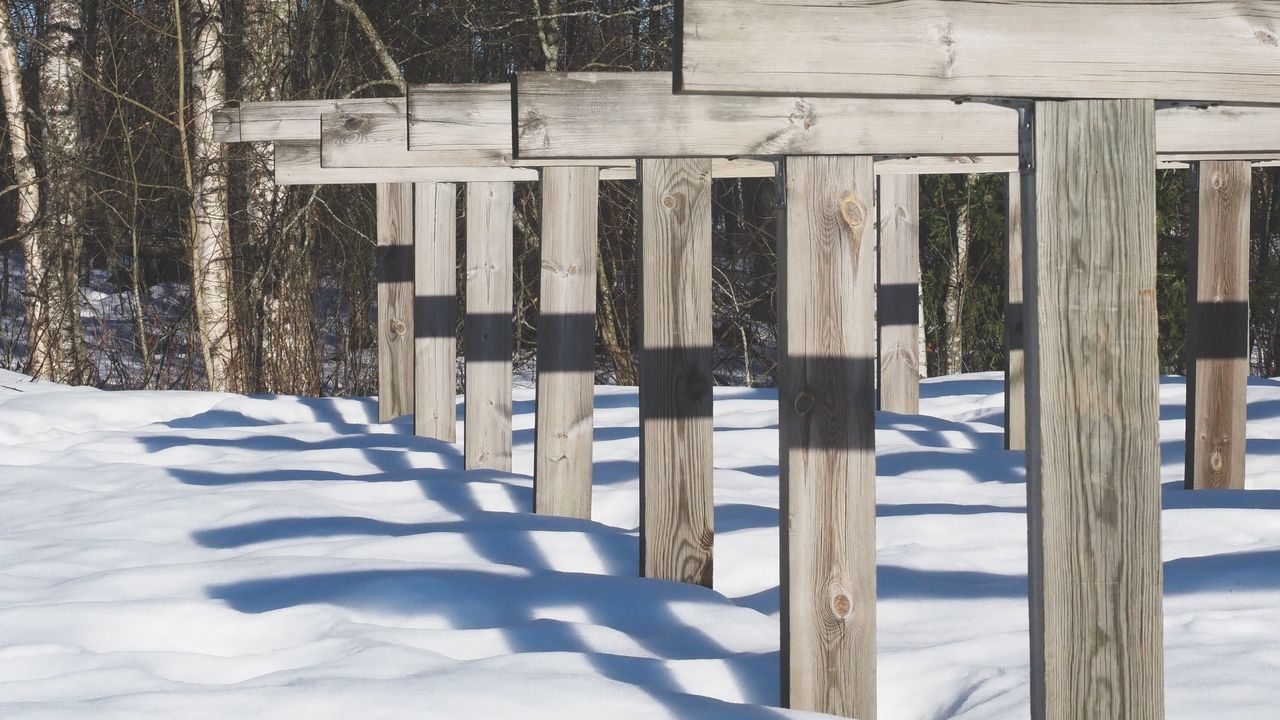 As you can see, the winter is pretty hard on trees as they both go dormant and end up carrying a lot of snow, so branches and entire trunks tend to break under the weight. This year has been a rally good winter with the weather and the snow, as there have been periods of a lot of snow and then a lot of periods of well-below zero temperatures, which keeps the snow looking good but without much more arriving. This means that there are all the benefits of fresh snow, without as much snow work, which is a bonus. If anyone remembers from Christmas time, I took a plate of food over to the neighbor, as I knew he was home alone. He seemed embarrassed but also grateful to have someone think about him on what is generally a day for family.

After his wife passed several years ago, he fell into a pretty deep depression, started drinking and broke the closeness of relationships he had with his adult children. I had talked to him a few times over the fence about it and I think that he enjoyed having someone close in age to his own son to have a chat with about various things. I have been concerned about him a couple of times since we moved in, as he would disappear for weeks at a time into a fog of alcohol, so we would try to check on him with the neighbors, who have known him for decades.

A of weeks ago, we found out he passed away ad while saddening in some respects, I am also kind of glad. I always got the feeling that he didn't want to be around anymore and had lost the meaning and will to live, but also didn't want to take matters into his own hands, so just neglected to care for himself and spend his time drinking. I think that the relationship with his kids played a big role in this too, as he expressed a couple of times his regret at the way he reacted to the death of his wife and how his actions affected the kids. There was always pain in his voice. In regards to the future, we had some verbal agreements with him about what we had planned to do in our yard, as we want to put the glasshouse a little "too close" to the boundary of the property. Unfortunately, while he agreed and was going to sign some formal papers, that is no longer possible and we have no idea what will happen with the property going forward. If the kids are looking to sell it, we already have 3 potential buyers for it. Over the last few weeks I have had a few conversations about getting older and how things change so drastically. Some people think that most of the change is in childhood, yet it is actually after retirement where the greatest change is, as everything we have built in life is taken away from us, piece by piece. Not only this, we recognize it being taken away and have the experience to understand the gravity of the loss.

Children on the other hand have a different experience, as they are looking forward to increasing their lives, gaining new experiences and dreaming about what they are going to become, what they are going to have. It is the innocence of being naïve to the world, not knowing that most of that potential will never be reached and what is, will eventually be stripped away until there is nothing left. For children, there is a world of firsts, like for Smallsteps today having her first lollipop. She doesn't realize that she will never have that first again and in time, she will not remember having it this one. All she will know is that she had had lollipops, there will be no individual moment for each.

As a parent, we are there for many of these early firsts, whether they are the first steps or the first skinned knee. Often, we do not realize how important these are going to be in our lives as while our children do not remember, it is these things that help build the connection to our children. But sometimes, life happens and we forget that the way we behave can undo a lifetime of attention, a lifetime of being the support for so many firsts. Children will never know all their parents have done for them, but they will feel it when they are no longer there.

Sometimes, cracks in life open up to swallow a person whole and like in the case of my neighbor, the loss of a parent happens while the parent still lives.