Introducing me and my work to Hive

Greetings from Berlin to all the members of the Hive community. I'm new here, and I've been introduced by my good friend @Phage93. I was born in Rome in the mid-late 80s and somehow I have been exposed to a variety of exciting inputs since childhood such as sci-fi and cyberpunk movies, video-games, and books, urbex explorations, and digging the electronic sounds that the lively underground scene of the 90's provided. At the time, Rome was a strong worldwide reference for electronic music, some of the finest Techno, Electro and IDM productions were crafted by Roman producers and packed by visionary sound engineers that enshrined the transition to new stages and shapes, feeding the compulsive need of exploration as an intrinsic objective of the electronic approach when it comes to music. To me in particular, I found the more experimental declinations of techno and industrial music being the most interesting sounds to dig, along some heavy metal and hardcore excursions.
Among other things, I soon felt a kind of need to deejay that huge load of strange music that I was constantly digging, to share and celebrate something hidden and beautiful with my homies. After a few years messing around with some dj and production softwares for beginners, I learned the basics of mixing vinyl from an old school guru of those old times, the progressive techno master Paolo Zerla. 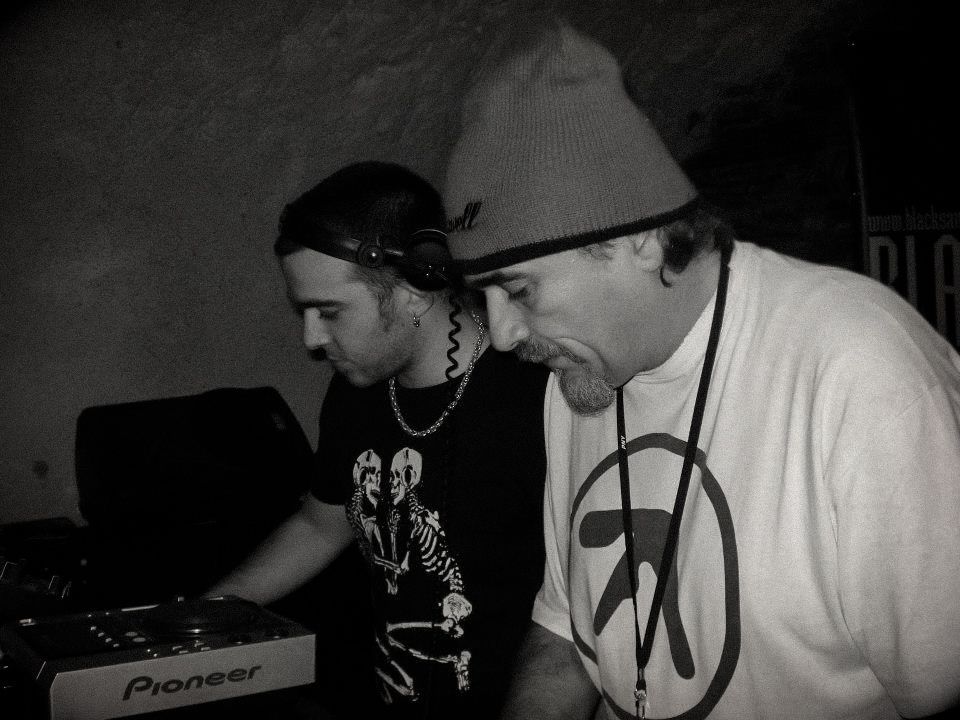 A spontaneous jam with Paolo Zerla; he was throwing live 909 percussions on top of my dj set, back in 2012 at Muzak, Rome.

From there I developed my own style and technique about mixing, and I could work with Black Sam Records, packing my earliest releases and enjoying some dj experiences in some clubs in Rome. Later, right after my Bachelor's degree, I moved to London to study sound design and music production at SAE institute. 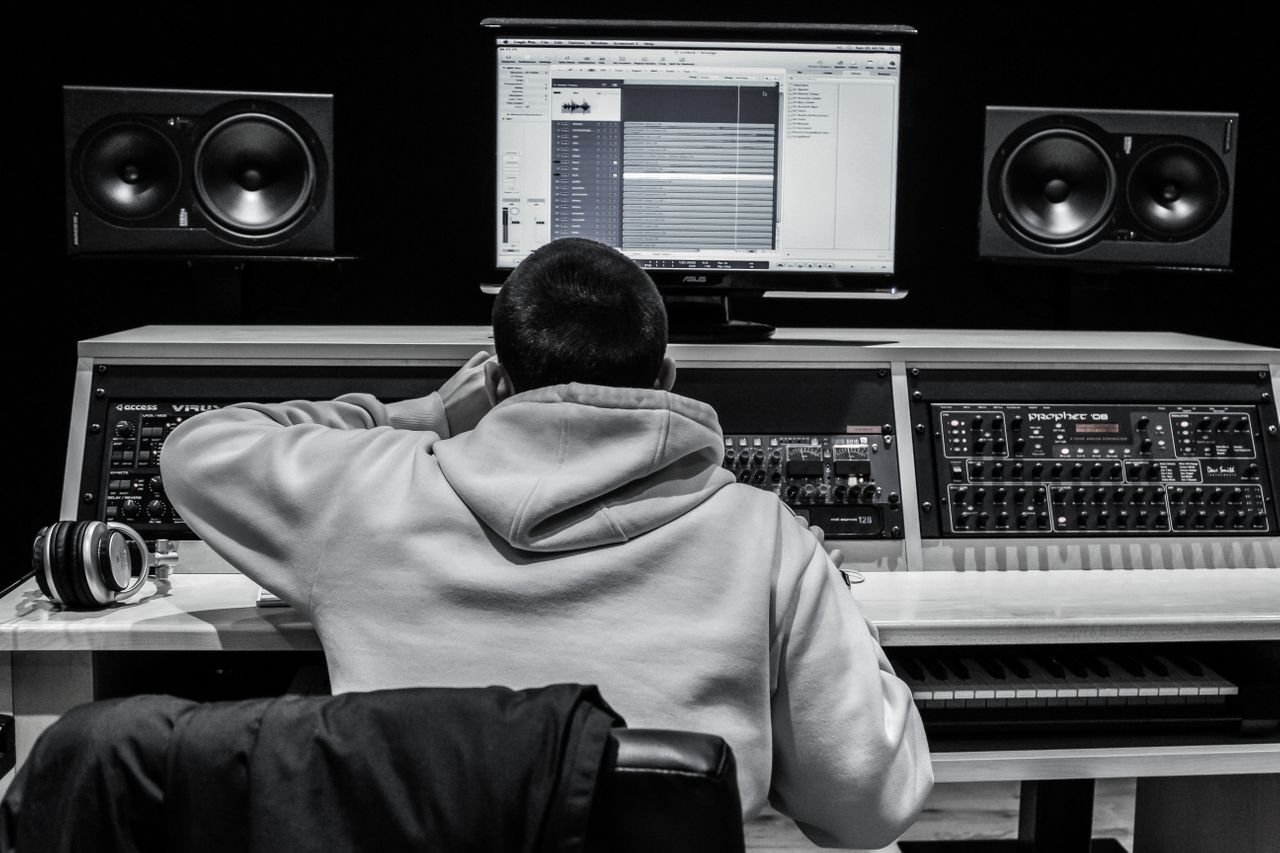 Inside the EMP studio of SAE institute in London, 2013.


Along my studies, I had to work to sustain myself (as a receptionist on the Strand), and still I was able enjoy deejaying around quite many clubs of the metropolis despite the little time (Pacha, Cafe1001, The Egg to name a few), and I was quite impressed while enjoying the crowd, which was different from the situations that I got to know in my hometown.
However after 1 year approximately some bad circumstances brought me back home, where I had to stay for a year to sort things out, but as soon as I managed to put some money together, I needed to continue my journey, heading towards Berlin this time, where I had been already couple of times in some memorable events. The effort to re-establish myself a third time in 3 years, was worth when I found my very own artistic dimension, and founded my own label imprint, called Monolith Records back in 2014. It is a platform delivering experimental dancefloor electronics looking ahead to the grim future of humankind from a Post-Industrial perspective dived into a dark dystopia. These peculiar electronic tales are often orchestrated as a tight cooperation between the concept and the music willing to clarify the consistent intention behind the work through the linguistic code, which can be a more accessible tool for the less electronically experienced minds. The only intent is to add a chapter to the story, aiming to expand more and define better the message and aesthetics of the project simply by creating something that we believe is beautiful, keeping distance from any consumption-oriented policy . Thus the sound of the label results not as any specific genre, but as a collection of music journeys having a well defined aesthetic and intent. 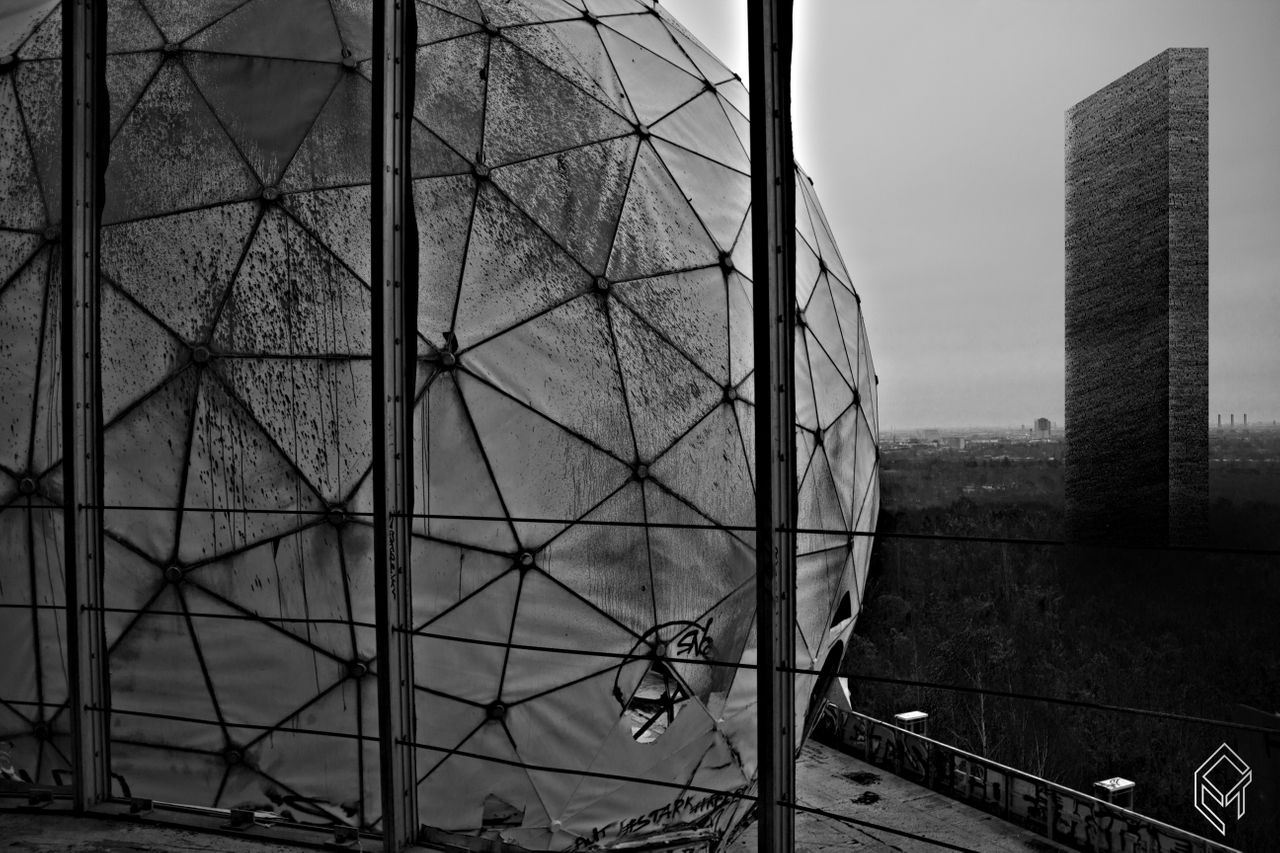 A photo that was taken on the 'Mountain of the Devil' (Teufelsberg) in Berlin for the Monolith Records project, back in 2013 by our graphic designer. Teufelsberg is a non-natural hill made of debris and rubble which used by the U.S. to host a listening station called Field Station Berlin during the Cold War.

Such strong identity attracted the attention of the lively Berlin underground techno community, and also from outside the music community there was quite some attention, which allowed amazing collaborations with a variety of international artists of which it's worth mentioning at least the pioneer of digital arts Alessandro Bavari, (who was recently involved as director for the special effects sequences with Ridley Scott, for his 'Alien Covenant' movie). Alessandro joined Monolith Records delivering 'Arturo', a sensational video contribution for the track 'Unknown1.3', a gem that reached spots like the 'Ars Electronica Festival 2017' and 'Interfilm Festival 2017' in Berlin, the Macro Contemporary Art Museum in Rome, 'Late Night Bizarre' Australian International Animation Festival', among the most relevant ones. Also, recently a split part of this videoclip is available as NFT on the fine SuperRare platform, at https://superrare.com/artwork-v2/arturo-01-27663 if anyone is interested in that while it is still fresh. Later A.B. also kindly provided a concession of a photo from the legendary 'Metachaos' photographic series (from the homonymous colossal video) for the 'Posthuman Condition' 12" Ep signed by Sirio Gry J.

Arturo from Alessandro Bavari on Vimeo.

Meanwhile I was discovering the underground and getting my first more relevant releases out, I quickly started djing here and there in clubs, finding amazing crowds of people truly in love with music, so curious and respectful about it. A real fertile ground that allowed and motivated me to provide and share even the most intimate sounds I ever got to know. Blending with the scene, I'll get to play later in the mayor clubs of the city, like Tresor, Griessmühle, About Blank, Arena, Suicide Circus, Berghain Säule (etc..) was an amazing outcome that I would have never expected at the time. Unfortunately, I will not have too many images about these underground stories because most of the clubs of the town do not allow taking pictures to respect the privacy of the attenders, and guarantee a less 'fictionalized' development of the event, and I believe that it truly helps towards this more genuine direction (let me say, that there are so many people out there trying to rave just to get some sort of 'social identity' nowadays, that often the bouncers of some clubs need to leave certain people outside, officially to avoid contaminating the vibe of the event...). 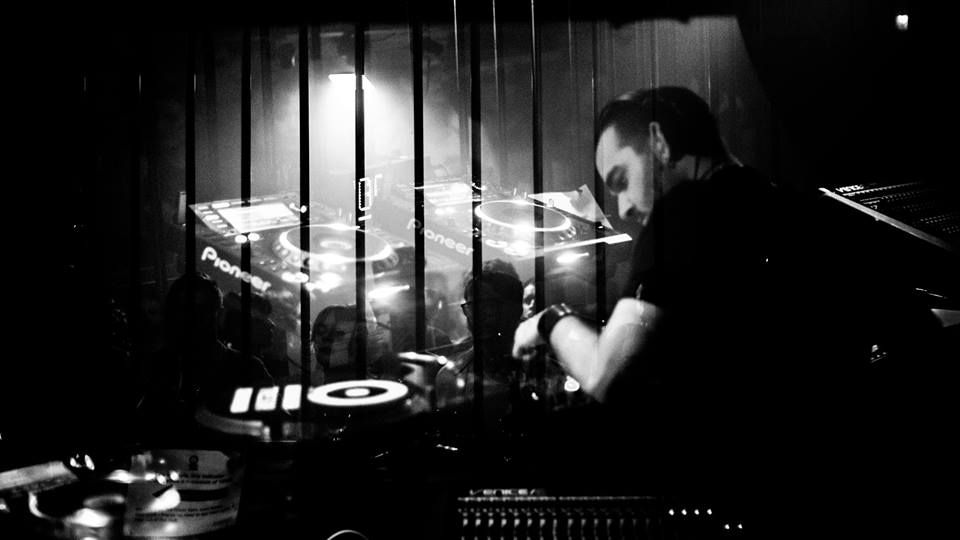 A photo taken by Francisco Vasconcelos in the legendary Tresor cage in Kreuzberg, Berlin, 2015


At some point, while Monolith Records kept growing attention, and I got to join the residency of the eclectic 'Liber Null Berlin', a postmodern project that emphasises the pragmatic in the use of belief, creating avant-garde and unorthodox methods, seeking a visible access to the world of underground music and arts. The cult of Liber Null imposes his sonic principles and dares solid visions that define its hidden universe, rejecting reality as the biggest compulsion with a ritual that celebrates chaos, the tool of realisation of all desires and will. The project, adopting different methods and approaches, didn't struggle to gather a solid crowd and the attention of the media thanks to its uniqueness altering the 'party' experience in Berlin, becoming one of the most important references for the Dark electronic sounds in Europe and exporting it in Greece, France, but also around Asia in Japan, Korea and Taiwan, and Russia. I will get to share the story of my Asian tour with the Liber Null crew later in this blog. 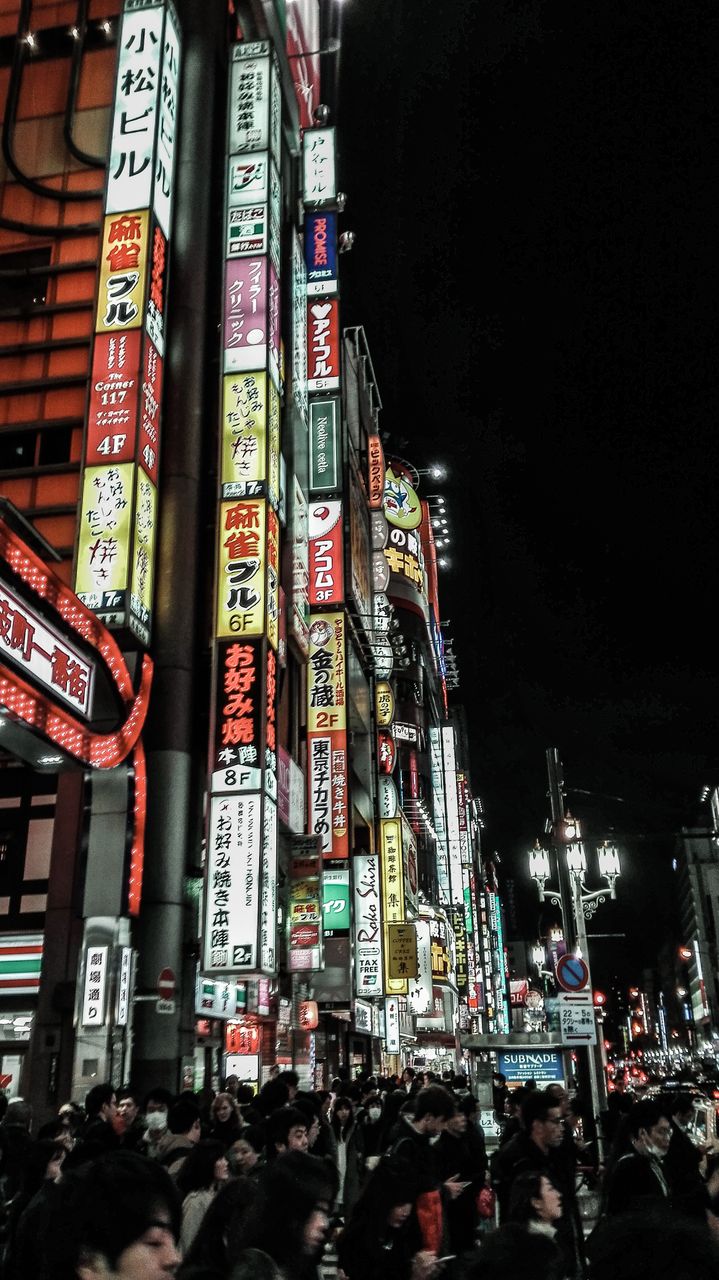 The streets of Tokyo at night during the Liber Null Berlin Asian tour in 2018.


All in all, I'm trying to state an approach which denies any rigid script provided, that needs to be followed in order to fit the default slot. Since I was a kid, I have found Music to be an amazing tool to bend reality, deepen perception and find different keys of lecture for it. It is an abstract vibration that resonates concretely in our soul; translating visions into sounds shaped upon a conjunction of experiences that get to be re-sampled and blend into the mind, I am seeking to deepen the understanding of myself and my priorities, and get closer to become the best version of my very own self. It is a need to make music like the need of meditation (for those who are able and know how to benefit from it), it is a safe island, where everything is possible, and you are the only one in charge to set the boundaries. I hope that my experiences will somehow bring a value to the Hive community, and that somebody out there will be able to benefit of my stories, which will be involving not only music, but also anything else I may find relevant to express ideas able to trigger further thinking and discovery for one's self, geared to the strong aesthetic identity developed through the years. 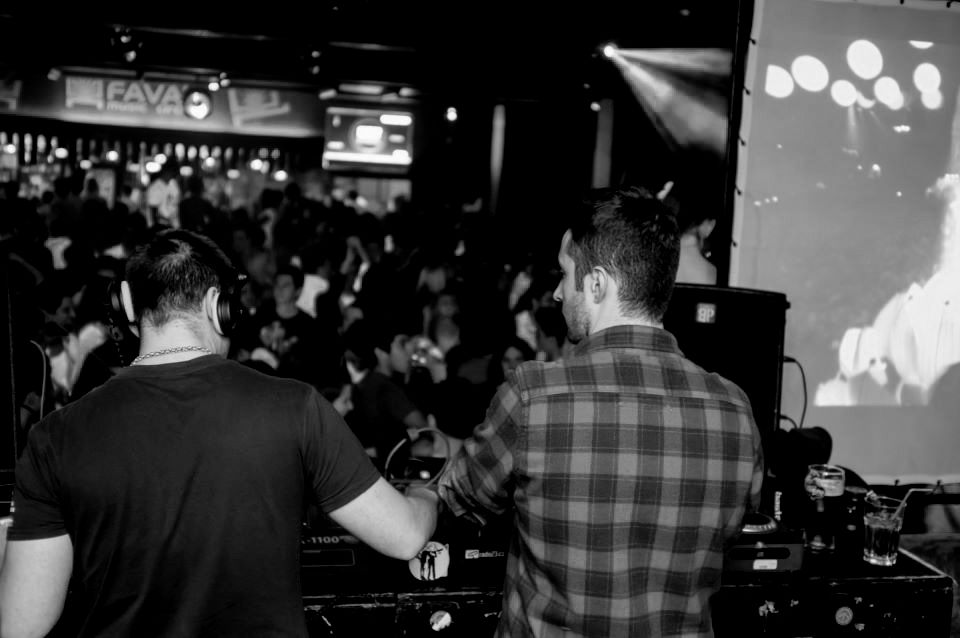 In consolle in Czech Republic with my good friend and colleague Stefano Rocchi back in 2013.