Ads on hive.blog. Add value to the token price rather than take it away.

What gives HIVE it's value?

This cannot be put down to just one factor as there are many when it comes to determining the value of a HIVE token. Price however is a lot simpler and can be put down to the same ecomic basics of supply and demand.

There is X amount of HIVE tokens on the market place.

There is Y demand for that amount of tokens and that gives us the current price.

This however is where we begin to run into problems. Every day there are more HIVE tokens brought into existence. If we keep increasing X without increasing Y then the value of the tokens will go down as the sellers try to get rid of their tokens at market prices.

The long term solution for this is and always has been to bring more users into the system and create more demand for HIVE pushing up the price.

Apps help by locking up stake. Communities help by burning tokens and users help by staking their HIVE and keeping market supply down.

The more users that you have, the more of them that will embrace the system and power up HIVE for more ownership of the eco-system. It's a numbers game and always has been.

I don't think that there is a quick solution to this problem. I think that it will take hard work and time to create a place that people want to be part of and even more time to build up the numbers and show people what we have built.

Every month brings more positive steps towards this but it will not happen over night. Instead it will take the community to build and market a thriving eco-system to the point that people will arrive by themselves and be self sustainable within one of the apps.

That day is coming but the best marketing tool in Crypto right now is the token price. It's no coincidence that when STEEM was at its all time high in token price that it was also the all time high for user activity. 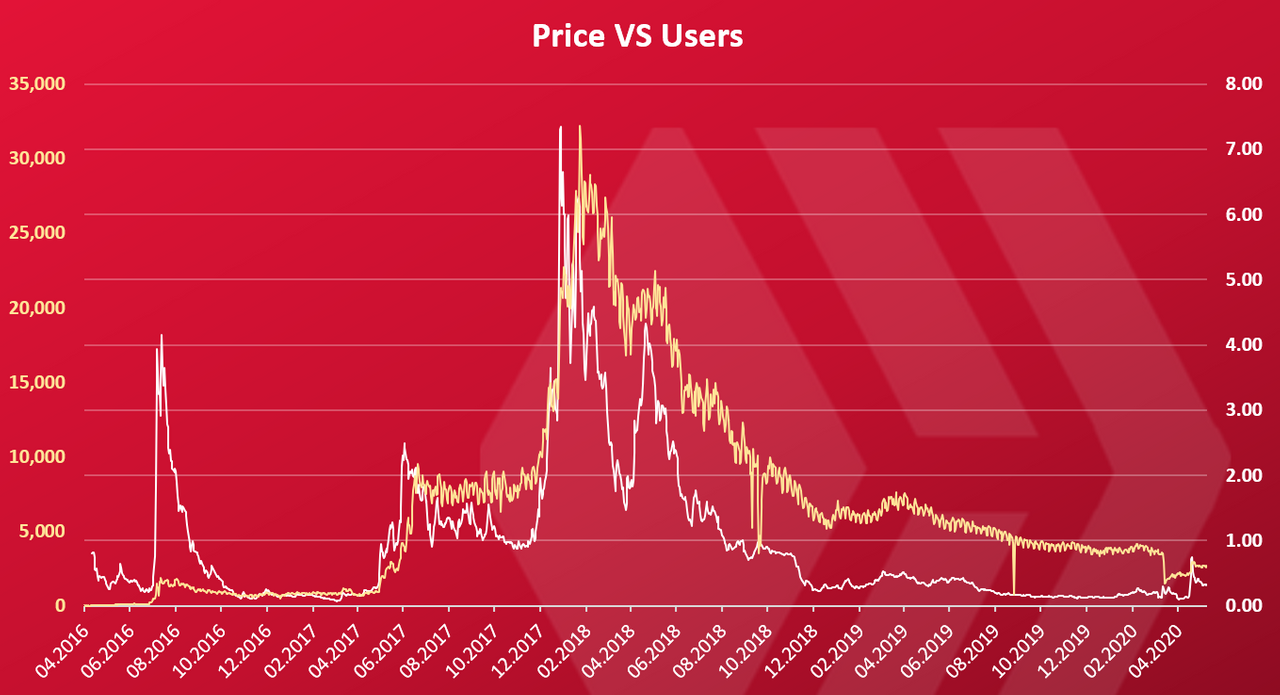 There are many other factors in play but more users will increase token price.


He goes through a lot of the users stats and ask the question.


Is there a faster way?

I think that there is.

While onboarding a lot of users should always be the end game for a social blockchain, I think that we can speed that up by increasing the token price itself. To do this we should utilize the best asset that we currently have on HIVE which is its strong community of users.

One thing that steemit.inc had successfully done before all of the issues was to generate a nice amount of revenue from advertising on steemit.com. For them it was about reducing the dependence on selling tokens onto the open market which had been driving down the token price in a vicious cycle of selling and devaluing.

For HIVE however it would be a positive cycle of buying and increasing the value of HIVE.

This would reduce supply and increase the price of HIVE. With a higher price we would see a lot more people interested in joining the eco-system and we would earn more ad revenue.

I know that originally some people objected to seeing ads on steemit.com but for me they weren't a problem. I barely noticed them and they allowed steemit.inc at the time to cut back and then stop selling STEEM onto the market altogether.

There are lots of interfaces but as hive.blog is a built for the community to use then I would like to see them integrated there and get the process started. Others like Peakd.com are operated by users like @jarvie but even if they had advertisements and used 20% to buy and burn it would be a help for token price.

If anybody has been following the tribes then you will notice how @financeleo is killing it with development. They are a true success story and one which others should follow. They have shown how ads can be worked.

They have also shown how to add value to their token from external revenue and have grown their buy and burn campaign massively since it has started.

If you want to see advertising done right, then check out what has been going on over at Leofinance.io or read their monthly report in full to see how it can be worked.


Where do we want to go?

If you feel like me and want to get to the stage that we can sell HIVE at a rate to live from then we will need to get the price high enough to do so.

For that to happen we need a lot more buying pressure on the token and build our way up there.

Unfortunatly at the moment there aren't enough users to keep buying and so will need more ways to reduce the amount on the market.

This is a simple and elegant solution to get that started. I think that @andrarchy was involved with the ads previously and can surely take out a lot of the legwork if he was asked nicely the best way to get them integrated.

This would give us a great marketing tool to push onboarding as we can share the message that we are regularly buying and burning tokens to the wider Crypto world.

Imaging getting to the stage where we can shout about buying 100K of HIVE from the market this month. A regular buy like that would make people sit up and take notice.

When people would ask where the token gets it's value we can just say from its users. This is the attention economy and we should be using that to grow.

I'm not sure who would be the exact people to implement this on hive.blog but if we share it and ask the questions then maybe we can get the idea rolling. I know that I would like to see $10 HIVE at some stage but if won't happen by itself.

Would have a think about it and see where it goes.