A Grave Dream - An Inkwell Prompt 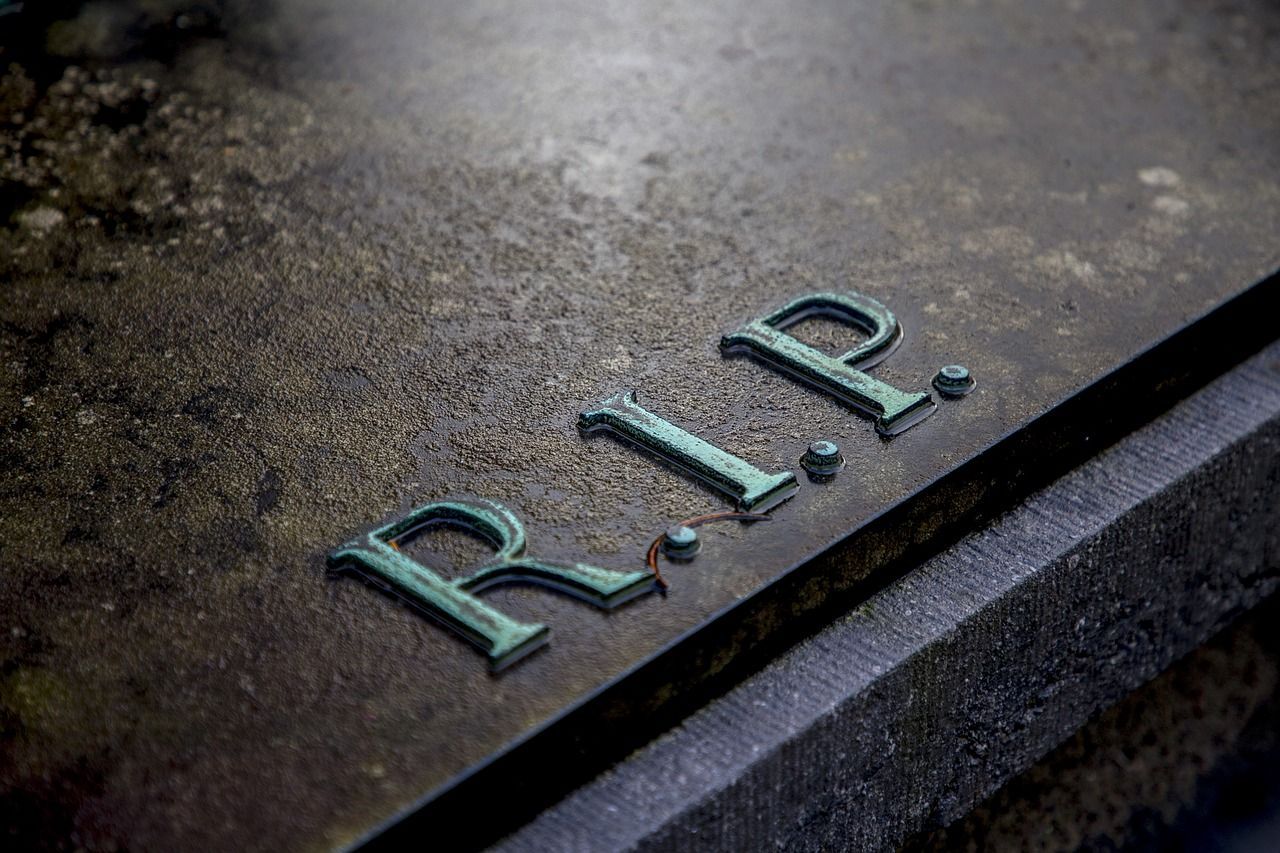 The security guard greeted Lawrence Gibson before checking his temperature and the content of his bag.

A wry smile appeared on Lawrence's face when heard the word “early”. For a telemarketer like himself who worked from 12:00 am to 8:00 am; telling him that he’s early when reporting to work at 9:00 pm felt a little weird.

Admittedly though, Lawrence was indeed two hours early than usual as he usually reports for work at 11:00 pm. And if not for the call from his team manager asking him to report early because another agent had to leave early due to some family emergency, Lawrence would still be sleeping back in his apartment.

“I was asked to report early,” Lawrence responded to the guard’s question after retrieving his shoulder bag.

Lawrence worked for a certain telemarketing company in Ontario, Canada, and had been a telemarketing agent for two years now. Being a hard-working person, Lawrence had never been absent and would even be called by his manager to fill in for his other teammates who couldn’t report to work due to various reasons.

After greeting his co-workers, Lawrence had his headsets on and was answering calls from clients.

“Sorry for asking you to report early.”

A man that seemed to be in his early forties approached and apologized to Lawrence while handing him a cup of steaming coffee after he put down his headsets. The man’s name was Joseph and he’s Lawrence’s team manager.

“We’re currently short on personnel so I could only ask you to fill in when Tom needed to leave work early.” He explained.

Tom was the name of the teammate that Lawrence needed to fill in for. According to his manager; Tom had to rush to the hospital after receiving a call from his mother about his father’s unexpected heart attack.

Lawrence took the cup of coffee before shaking his head: “It's fine. Tom has a family emergency so it couldn’t be helped,” he replied. “Besides, it’s not like this is my first time filling in for someone else,” Lawrence added.

After conversing for a little bit with his manager, Lawrence returned his attention to his monitor and started receiving phone calls again.

Lawrence worked till morning, stopping only for a cigarette and coffee break, and a few bathroom breaks.

Before going home, Lawrence went to the bathroom to wash his face. After drying his face with a face towel, he looked in the mirror and was greeted by an incredibly haggard and pale-looking face.

“I looked horrible…” Lawrence mumbled to himself after seeing his ghastly appearance in the mirror.

Sighing to himself, Lawrence walked out of his company’s building and rode a taxi to his apartment. Although Lawrence has a car, he rarely uses to go to and from work in fear of getting into an accident if he falls asleep while driving. With a taxi though; Lawrence doesn’t have to worry about accidents and could even take a short nap on the way.

Upon arriving at his apartment; Lawrence went straight to bed without even changing clothes. With this alone; one could see how tired Lawrence was. Deeply sleeping; Lawrence starts to dream.

In his dream, Lawrence found himself in a place filled with fogs. As he walks around the fogs, he noticed a single grave with a headstone on top just ahead of him.

“Am I in a cemetery?” Lawrence asked himself in confusion after seeing the grave.

Although slightly creep out and hesitant after seeing the grave; Lawrence's curiosity still won over his fear and slowly inches towards the lone grave.

Upon arriving at the grave; Lawrence examined it curiously and saw nothing special about it. Slightly disappointed, he turned towards the headstone and almost had a heart attack upon seeing the name on it: Lawrence Gibson.

Yes, the name etched on the headstone was none other than his own!
Alarmed and terrified; Lawrence took a step back in shock. But before he could comprehend the situation, something more terrifying happened. A rotting arm grabbed him on his left ankle!

But before Lawrence could even react; the ground he was standing on suddenly collapses – plunging Lawrence into the dark abyss below!

Lawrence suddenly woke up while screaming and flailing his arms as if he was falling and was searching for something to grab onto. But upon noticing that he wasn’t falling, he stopped and looked around. He’s not falling into the dark abyss and was still on his bed – inside his room.

“Was that a dream… no, a nightmare?” Lawrence, whose face was as pale as a corpse questioned himself while breathing heavily.

That was the first time that Lawrence had dreamt of something so terrifying. And although he doesn’t want to, he couldn’t help but remember the dream – especially the grave with his name on the headstone.

“It’s just a nightmare… don’t take too seriously,” Lawrence reminded himself upon noticing his sweat-soaked clothes.

Lawrence ignored his sweat-soaked clothes and grabbed his phone on the side table to check the time.

Much to Lawrence’s surprise, he had slept for more than six hours. Lawrence remembered that the dream, no, the nightmare doesn’t seem to be that long.

“To think that I slept for more than six hours…”

Having just woken up from the nightmare and the fact that he haven’t eaten anything yet since the coffee and sandwich he had back at his workplace, Lawrence was understandably famished.

After taking bath and changing into more comfortable clothes, Lawrence took a ready-to-eat meal from his fridge and put it inside a microwave. While waiting for his food, Lawrence opened the television and browse through the channels, looking for an interesting show. But although Lawrence was staring at his television screen, his mind was somewhere else.

His dream still bothered him. Questions like why did he dream such a strange dream, or what’s the meaning of his dream was running on his mind. If not for the sudden sound of the microwave indicating that his food was done eating; he would still be obsessing on the strangeness of his dream.

After eating a very late lunch; Lawrence decided to take a walk to ease his mind. Usually, he would be sleeping again especially since he needed to report for work early again tonight. But since the dream was still bothering him, he decided that a change of pace might be in order.

An hour later or so later; Lawrence returned from his walk with a plastic bag of McDonald's in tow.

Lawrence has a habit of eating fast food when he’s feeling incredibly stressed. And without a doubt, his dream had stressed him greatly. He was hoping that the food would help relieve some of his stress.

Feeling slightly better; Lawrence reported to work early again and started his night as per normal. At 2:00 am, he got up from his chair for a bathroom break.

But before he could even reach the bathroom, his surroundings suddenly turned dark and before he knew it he once again found himself standing in front of a grave! Moreover, the grave in question was the same grave he saw in his earlier dream!

Seeing the grave and the headstone with his name written on it, Lawrence felt terrified.

“How could it be? Why am I in this place again?”

Confusion and fear fill Lawrence’s heart. He could not understand the scene in front of him. Lawrence was certain that he was at his workplace just a moment ago.

But before Lawrence could have his answers, something more terrifying happened. A group of rotting corpses suddenly sprung up from “his” grave and lunges at him!

The most terrifying about the rotting corpses though was the fact that every one of them was him!

Yes, even though the corpses were rotting; Lawrence could still recognize them which was not surprising since he sees that face every single day.

The corpses dragged the terrified Lawrence into the grave. And although he kicked and scratches at the corpses, there was no effect. But the moment that he was about to be fully dragged into the grave; Lawrence saw a blinding white light.

When Lawrence came to, he saw a middle-aged man wearing a surgical mask and a white long coat putting away a small flashlight. The man was a doctor.

“What happened to me?” Lawrence asked in a hoarse-sounding voice.

“You suddenly collapsed due to exhaustion, and was rushed to the hospital,” the doctor answered.

Lawrence stared at the doctor in shock after hearing his answer. And it finally dawn on him that everything that happened to him earlier was just a dream. Moreover, he finally had an inkling as to what his strange dream meant.

The dream does not mean his death like what he initially thought. It was more of a warning than anything else. The grave, the headstone, and the rotting corpses were mirrors of his subconscious mind. His subconscious mind was warning him to change his lifestyle for he’s slowly killing himself.

Yes, his current lifestyle was far from healthy. His job as a telemarketer, his constant graveyard shift, lack of sleep, his love for fast food, cigarettes, alcohol, etc., etc. – all of it was slowly killing his body.

Lawrence might have subconsciously known this fact and it was for this reason that it manifested as a dream.

“You should rest well,” the doctor said. “You had a very close call,” he added before leaving the room.

Lawrence was startled by the doctor’s somewhat cryptic words and stared at the closed door for a long time as if waiting for the doctor to return and explain the meaning of his words. But of course, the doctor didn’t return, nor was there an explanation from him. Not that he needed one as he already knew what the doctor meant.

“I should find myself a better job…”

Lawrence closes his eyes after whispering those words. He had decided that on what to do once he’s out of the hospital.