If someone had told me that was how the day will end for me, I wouldn't have believed it. I had the day all planned out after all. I was finally going to tell him about it, and in my head, it will all end romantically and in bed hopefully.

It's been a whole month since Romaine last took me on a date. With Romaine, getting to spend quality time was a sort of luxury in itself, and that's gotten even worse since he added the herald to his clientele. I tried to remember the last date they were on. How we had gone to the Tymans waterpark. That was the most playful I had seen Romaine in a long time. We would buy that Hermes bag I now hold dearly on our way back home. It was nice. While lost in my thoughts, a knock interrupted my daydream. That has got to be Romaine she thought. I stood up and ruffled my hair a bit. "It's never best for a girl to be prepared too early for a date," I thought.

I opened the door and there he stood, all sharp and lovely with his well-pressed Eagles shirt and those black Jeans that turn me on whenever he's wearing them. "Hey babe," he says. Jolting me out of you know what. Hey love, come inside while I quickly fix my hair, I replied.

A few minutes later, in the car, he's driving, but his eyes are on me, I pretend not to notice as I was enjoying the attention, but I soon realize I also don't want to die. So I tell him, Romaine, you are going to get us killed. It's not my fault that I have got beauty to my side. Maybe you should sit in front of me, that way, my eyes will be on the road. Or my boobs, I replied.

You know, I don't understand it. Your hair was amazingly quick to fix. If I didn't know any better, I would say it was already fixed when I got to your house, he says. I hate him when he does that; predicts human behaviour with such accurate precision. Like you aren't wearing those jeans, hoping it buys you some goodwill to get into my pants, I retort. We both laugh at it. 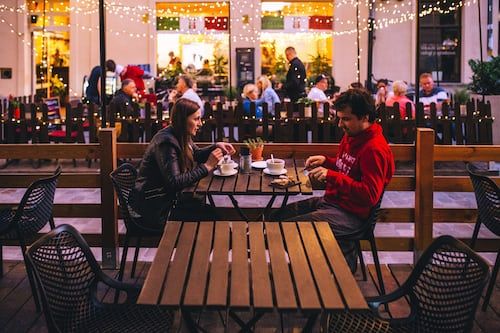 We are at Saltsman dinner, where we are about to have dinner before we head home. I thought better now than any other time. We need to talk Romaine. He looks up at me and goes "establishing a baseline doc. Miss, are you pregnant?" Amidst laughter, I say no. Need money for after-abortion treatments? Romaine!! No!, I said still laughing. Despite the jokes and laughter, the dinner suddenly seems a little darker. Some lights must have gone off, or maybe it was the look in Romaine's eyes. Nah, it must have been the light bulbs.

Romaine, do you love me? He drops the fork and the piece of chicken that was destined for his stomach. Do you really love me? I repeated. What is this babe? Just answer the question, Romaine. It's easy enough. I retorted. Yes, I love you, very much, he answered finally. Tell me then, why then do you find it so easy to be away from me? You go for work travel for weeks on end. You don't come in during the weekend of such travel. Most times you don't call when you are away. If I don't call, we might not talk, I say. At this point, Romaine drops the table knife too. He wipes his mouth and looks at me with a sturdy look. Are you serious, right now? Are you? He says with a slightly raised voice. Keep your voice down Bee. All I am saying is that it's like you don't want to spend time with me at you. Almost like you find every reason not to. This is the first date we've had for over a month and for most of the time we spent seeing that movie back there, you were on your phone, and you weren't even holding my hands or anything. I might just as well go see the movie with my next-door neighbour. He would have been more involved, I said. I realised I shouldn't have said that last part, almost as soon as I finished saying it.

You wanna know why I seem to always travel for work, Why I barely have time? It's you, yes you!! I work so f*cking much so I can provide all you need, cause you are always needing something. Then the little time I get away from work, I have to spend it meeting your emotional needs and being present for you. While you were giggling away at every silly scene in that cinema, I was trying to finish up these two articles I have to submit to the Herald by 8 AM tomorrow, so I can be paid eaely enough to get you your rent. Isn't they dying two days from now? It's like since I met you, I've stopped living. Everything I do now is for you. You are a burden to me. I'm choked up so bad, I can hardly breathe. I'm almost sinking into depression, but you don't see that, do you? Because somehow, this relationship is all about you, your needs and you again, he says.

With tears streaming down my eyes, I tell him, you don't mean that, you are just angry. It's okay, sit down bae. But I do, I mean it, every word. You have been a burden to me since I met you. My life has taken a bad turn and has kept on spiralling down. You are killing me, you are destroying my life. All of this has been one great mistake, he says.

You can't possibly mean any of that? How can you say that? I can't believe you right now. I replied. By now, the whole diner is looking at us. With tears streaming down my eyes into my chicken, I make a last-gasp effort to save face. Baby, look at me, it's me Julia, the love of your life. Just please look at me. I said. But by then it was too late. I had lost him, I knew it. He slids his hands into his back pocket, brings out several notes, puts it on the table and made to leave. He stops abruptly at the door, turns around and says, you haven't got an idea, have you? We are done Julia and don't call me. Goodbye.

At this point, I can't take it anymore. I let it all out and scream, Nooooooooooo!! All eyes are on me and I know if I don't leave soon, I will take it all out on someone. The young waitress comes up to me and asks, are you okay ma? Is there something I can do for you? I look at her and smile a bit. Poor little damsel of a thing. Someday, somebody will treat her like this, even though she deserves better. No, thank you, I replied. I open my purse and pass her a few notes. Thank you ma, she says.

Later that night, I can't sleep, I can't stop crying. It continues to echo in my head; you are a burden to me, you are destroying my life. I can't believe he said that, I keep telling myself, but I knew he did say it and meant it. This was the end of the only good thing in my life. Indeed the gods had dipped a hand of poo into my destiny.