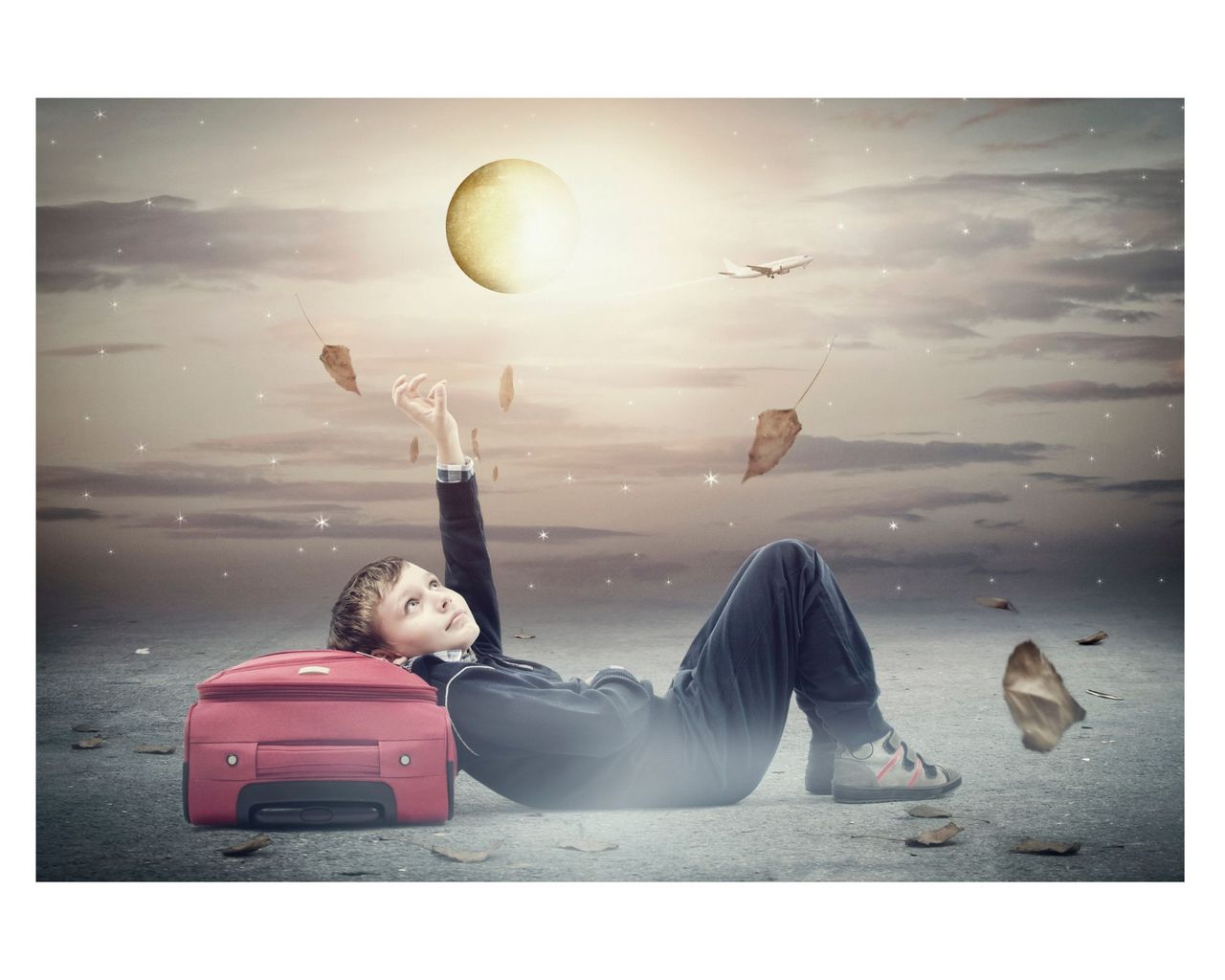 We all be sailin' aboard me pirate ship, The Flying Down, with Capt'n Dreemie. Sailin' fast for Thursday's port -but we be headin' for a hidden sand bar! Unbeknownst to any pirate, this sand bar was newly created in the last storm of the area, and if we hit it - we'd be marooned there for days!

"Blow me down!!! She's trying to steer us off course! All hands on deck!!!" I spin the wheel back on course and try to put us towards our treasure destination - heading BACK towards the sand bar. Dreemsteem

David slid the small embroidered bookmark into place, caressing the raised letters gently with his fingertips. Then he softly closed the storybook's covers over its treasured pages. Turning it over in his hands, wistful memories bubbled up under the surface of expectation. Reading to his son at bedtime was one of the greatest blessings of his life. Nothing could ever deny him these precious moments.

As the chapter drew to a close, he sensed the gradual slowing of his son's breathing; the rise - and falls of the little chest snuggled in beside him growing further apart. A long-drawn sigh. A timely release of the remaining burdens of childhood for the day, as Thomas drifted off. The little arms tucked around his neck relaxed, going limp and he turned to support his son's head gently onto his pillow.

Running his fingers gently through the wispy ash-blonde fronds framing Thomas' face, he bent down to kiss his forehead.

ok, buddy... sweet dreams... we'll continue tomorrow and find out what that silly whale is up to and whether Capt'n Dreemie and her crew made it to the treasure.

He tip-toed out of the room and onto the landing, pulling Thomas' bedroom door gently behind him until he heard the soft click securing it in place. Then, hesitating, he reopened it an inch - just in case. If Thomas had another of his nightmares, he wanted to be able to respond when anguished cries of "daddy!" rang out.

He made his way down to the kitchen, flicked on the light, and refilled the kettle. Then he settled down at the small table, always laid for three, to eat his dinner; reheated leftovers from the evening before. The place setting opposite him had remained untouched for a little over two weeks. The pricking in the corner of his eyes caught him off-guard, but he fought back. He probably had no tears left to cry anyway.

Thomas sat bolt upright in bed. He glanced wide-eyed at the carriage clock sitting on his bedside table, emitting a low luminous glow. The big green hand was on the 12 and the little one on the 1. He was awake again in the middle of the night but this time there was no nightmare to blame.

His name, nothing more, nothing less. He had heard it so clearly. It was so loud that it had awakened him, resounding inside his head. But he wasn't scared because he knew that voice and he would have recognised it anywhere.

There it was again, although this time less urgent, more gentle. He looked around and, at first, saw nothing and no-one... Then the scene started to shift and change and he felt himself drifting... He was lying down, in a place where the earth met the sky, surrounded by a billion stars, twinkling ethereal in the reflection of his eyes. Autumn leaves swirled around him, dancing to their own tune, reminding him of the passing of time. He reached out to touch the sun; so close, so warm, so comforting - Day and Night - coming together as one. And then he heard her voice whispering amongst the stars...

and then it all dissipated once more.

Thomas leaned over the edge of his bed and felt underneath for his wooden box of special things. Retrieving it, he placed it gently on the sheet in front of him. He stroked the grain of the lid, and slowly moved his fingers to its smooth rounded edges, before lifting it to reveal what was left of his world. A small photo album, some loose pictures, a dry pressed daisy chain, a few small pebbles, a DVD, and his favourite book; they were his little treasures.

He picked up the book and sat staring at the cover art.


The Whale who loved too much.
Then he placed it aside for a moment while he retrieved the DVD from its case, slipped off the bed and made his way to the little tv across the room. He slid the disc into the player and turned it on.

He knew his dad was trying hard... really hard, and he loved it when his dad read to him, but he knew the end of the story already. He knew that Capt'n Dreemie would find her treasure and that it would turn out to be very special indeed. His mom had read it to him every night for as long as he could remember, and tonight he needed to hear her voice again. Two weeks felt like eternity.

His mom appeared on the screen, laughing, happy... and he was there too, curled in her lap, snuggled in between the fluffed up pillows on her bed. She was tickling, he was giggling. His dad... filming. Hard to believe it was only a few months ago. And then she picked up the all too familiar book, opened its covers and started to read to him.

David stirred. Once again he had fallen asleep sitting up at the kitchen table. Once again the thought of returning to their bedroom had been too much to bear. Losing her felt insurmountable. He strained his ears... he could hear muffled voices coming from somewhere in the house. He followed the sound through the hallway, up the stairs and onto the landing. He walked across and found himself outside Thomas's bedroom. Through the crack in the doorway he could see light flickering through the room and he realised that the TV was on...

... and then he heard her voice, closing out the story...

... and then the whale lifted Capt'n Dreemie out of the water to safety and back onto the deck of The Flying Down where her pirate crew was ready and waiting to follow her on their next adventure.

Capt'n Dreemie turned to the whale with heartfelt appreciatiation.
"Thank ye kindly, me fine friend. So if I understand ye right, there is no treasure to be found where X marks the spot."

"Aye, ya welcome Capt'n Dreemie... ye be safe now... and yer ship be afloat once more... ye be staying clear of them sandbars now, ye hear! And, I say it again... There be no treasure chest! But, there most certainly be treasure, it's just not what ye might be thinkin'. The treasure ye be seeking, starts with LOVE, and from love... the riches of life, they will follow. So set sail for home Port and dally no more..."

...and with that the whale turned tail and swam off into the deep blue.

What was that all about, Capt'n? Enquired the 1st mate.

Aye, that me Heartie... that was a lesson in Love.

David turned and sank to his knees, gasping for air. This time, unable to suppress his emotions, his gut wrenching sobs escaped from his heart and tore through every fibre of his being.

When the final whimper had escaped his lungs, David pulled himself slowly from the floor, entered the room and padded over to his son's bedside. He took a moment to stare at his sleeping child, whose head was buried under the open book and pressed into the neck of his favourite giant stuffed animal: a plush blue whale called Love.

He picked up the book and was about to close it when the inscription caught his eye again...

To my darling Thomas, my love's treasure. I hope you are happy throughout your life. Start with LOVE, follow your heart, and you can't go wrong. Love always, Mom x (PS: X always marks the spot... and it's a place in your heart where I will always be, and where love resides.)

A single tear splashed to the page on this closing chapter. David moved the bookmark back to the beginning and tucked the book into Thomas's box. Then he slid the box carefully under his son's bed.

He was retracing his steps across the room when the DVD player sprang back to life, and the home movie started replaying, stuck in a timeless loop. He moved to switch it off but then, looking back at Thomas, sleeping peacefully, he thought better. Their lives had been forever changed, but no matter where it went from here, they would always have time for her, and she would always have a voice in their home.

... and so he headed towards the light of the landing instead.

This is my entry to the Dreemport Finish the story and Name the Ecency whale contest, and to the Ink Well prompt 'chatterbox' - where I have used the part-prompt 'box'.