I opened my eyes and found myself in a different universe. In my eyes, there were two different planets, one in each of them. Today I had discovered water on both those planets. Oh, the rare water. That much water was enough to live for the rest of my life.

The world I belonged to was dripping from my hands like molten mercury. My mind was calculating the time by hearing the sound between two droplets from the faulty tap. I saw in my dream a falling star and I thought I was dead. I was asking falling stars to stop time. Actually, I was wondering whether I had died or if they had left my dead body in space to get rid of me. Was there any facility or any way to bring my dead body back to earth?

There were many questions, but if I had died, why had my body not yet turned into an ice mummy in the cold of space? Or why is it that my dead body did not explode due to the pressure of space?

No, I probably wasn't dead. Or if I was dead, then these smart people had left my body in space to save the surface of the universe from getting spoiled by not cremating me.

I was no more worried about Earth turning into vapor and going to the sun. The planet in my right eye was slowly growing into mountains of moss were rising. Rivers were coming out tearing the chests of the mountains. A new world was settling in the planets of my eyes where I would leave my old, rotten world and take on the role of Adam once again.

No, this time I would not extend my hand for that apple on that tree, not even by mistake, as I did not want to increase the population to the present level. I didn’t want to start that process again this time. The biggest problem with the human mind was that it was against nature. You know what? The moment you deny nature, at the same time you deny life. Death is not in the future. Half die at birth, and the rest of the half die in the process of living life.

Oh, that’s your illusion that you are alive every moment when back on earth. The process you were going through could only be called “life” and also “death”. It’s a process that goes on. It just has to be completed one day. But the word “death” itself scares people, simply because people fall prey to misconceptions about nature, the supreme power. 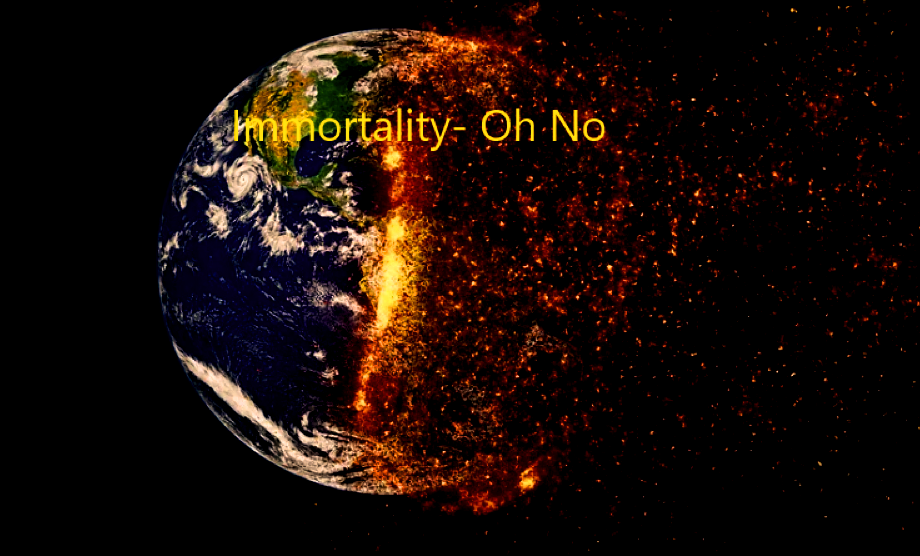 Image edited in MS
You must have heard the name Dolu the Great. Dolu was at the peak of his arrogance. The most arrogant people in this universe are great. The more egotistical you are, the more opposed you are to the natural process of life. You hate Mother Nature because you’re the greatest. Whoever creates the most conflict is the greatest.

Everyone in the world knew about Dolu. People didn’t know what he was doing, so people thought Dolu was great. His greatness was not because he was king. His greatness was in his destruction, and his greatness in his ability to break the mountains and extract diamonds, gold, and other precious metals.

So Dolu wanted immortality just as much as he longed for the rest of the silly things in his life because he wanted to conquer the entire universe with his powers. By that time, he had conquered half the universe ruthlessly, and now he was getting impatient, as he felt he needed more time to complete his plan. That’s why he was looking for immortality.

He asked me, “People say that gods live for thousands of years, and they have attained immortality.”

Dolu asked, “Can you teach me about immortality? I will give you whatever you want in return.

He asked his soldiers to bring all the gems he had, the big boxes full of diamonds, pearls, and gold. Opening them, he said, “Here it is. The wealth of the whole universe is here.”

I wanted to laugh, but I refrained and said, “You have been stealing things from the Earth?”

He looked at me. I thought he was about to explode with anger.

I further said, “All these gems and gold are nothing but clay. You don’t know why you consider them so precious. You have not understood the value of the earth and nature on which you walk, which gives you food, but a stone which you call “diamond,” which is of no use, has become precious to you. “

I knew he was silently laughing at me.

I said, “Your diamonds are not precious because you see beauty in them, but because you consider them priceless.” Look at the flowers blooming everywhere; they are more beautiful than your diamonds. The flowers have a fragrance, but you never noticed that. Of course, the diamond shines. But you are happy because not everyone has them. It is not happiness, it is greed. “

Dolu lost his cool and said angrily, “Either teach me how to get immortality now, or I will get you beheaded.”

The idea of immortality has always fascinated people since the beginning. Wealthy and influential people were not lacking in anything, but they just could not live life. So, naturally, Dolu wanted immortality. Every powerful being in the universe desired immortality.

I thought, “If you really want to curse someone, don’t wish them death, wish them eternal life. This would be the worst curse for anyone. “

I smiled, “Well, you are too eager to know about immortality. Look, there is a forest in that direction. When you reach that point, you will find a small cave. When you enter that cave, there is a small water tank. Take a sip of water from it, and you will become immortal. “

Dolu went to the forest with a group of his bravest soldiers. Following the signs given by the yogi, he discovered the cave in the forest. But now he did not want anyone else to enter the cave. He didn’t want anyone else to become immortal. Dolu’s life goes on because he can kill people. If everyone becomes immortal, then he will find it very difficult to fight any war. So he left the soldiers at a distance.

He entered the cave and was about to drink water from the water tank when a vulture sitting on the other side of the pool said, “Wait, great fool Dolu, wait.”

Dolu stood there trembling. He imagined the universe thousands years later, doing the same stupid things he was doing now, and what a sight that would be! He understood the point. Dolu slowly returned and did not drink the water from the pool.

Dolu was listening to the vulture.

"You have destroyed nature. You know nothing about her and have acted against her based on your fantasies. Do you have any personal information about nature? Nature is something that you could not distort completely yet. You have become very perverted, and only a few know everything about her.

You twisted and molded her according to your wishes. But can you twist death in your own way? No, you can not change it. No matter how many fantasies you conjure up, how many books you read, or how many darshans you attend, the very next moment, when death knocks on your door, you realize you know nothing about it. This is the reality of life.

If you were to accept nature as a process of life continuously, every moment, your values in life would be totally different. If you had known, just as a flower blooms in the morning and withers in the evening, the same way, you are alive now, flourish and tomorrow morning you may die, you would not have seen a single flower on the way.

You shouldn’t forget anything that is important in life. Somewhere in your mind, you have the thought that you will always be here. That’s why you appreciate all the wrong things. You don’t care about life because you have rejected the universe."

The vulture continued, "Life and death are not separate processes, but they are deeply related to each other. No one can separate them. It is in your every breath, breathing is life, exhaling is death. This is happening to you every moment. It’s time you appreciated nature."

Dolu has come back, but he hasn't changed a bit. He hasn't stopped playing with Nature.