A well-to-do little story about a polite conflict; despite references which could be accused of being immodest. 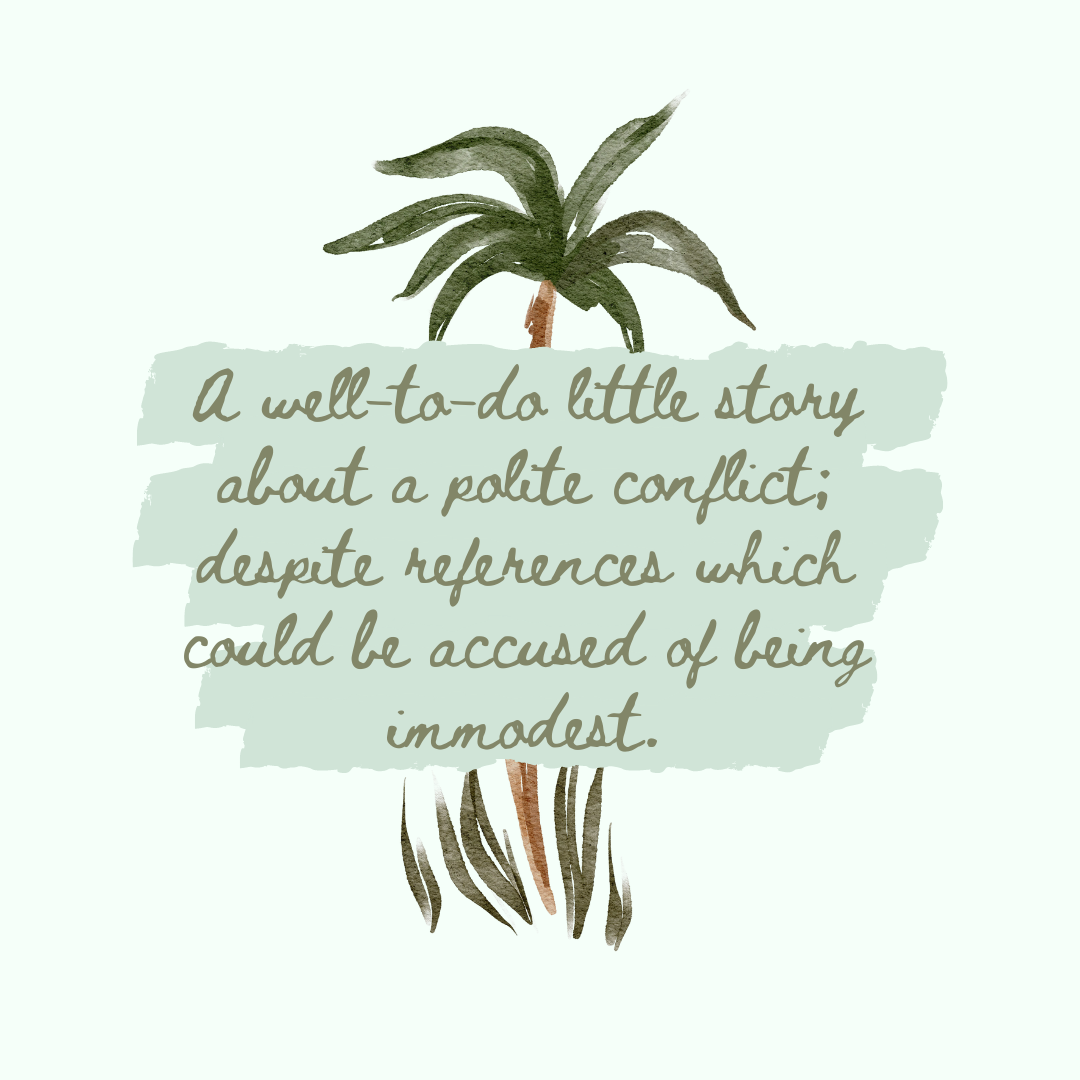 Image made using a Canva template

Metatextuality: A postmodern concept, whereby a text points at its own constructedness. It breaks the rules of writing, by robbing the responder of a chance to be fully immersed in a story - making them realise they're reading a deliberate construction, rather than observing it as in real life. This, paired with the breaking of social norms, led me to write this week’s piece. Enjoy! - I'll ask you to appreciate the concept this week, moreso than the colourful ddetails which I feel more at home crafting.

A well-to-do little story about a polite conflict; despite references which could be accused of being immodest.

It was one of those golden cane palm trees; you know the ones, with multiple trunks coming up, arching their backs towards the sun [does personification evoke a sense of grandeur?] It was a mature height with no discernible features which would not allow the clump to stand out from the ones in the neighbouring yards. Its golden fronds would extend and unfurl at the right time, and it’s fronds would brown and fall at the right time [syntactical parallelism to craft rhythm, unnecessary some might argue, but it does create a sense of calm for the conflict to emerge from].

The tree would not usually present an interesting vignette, although as the weather was warming, this was all about to change [insert ominous metaphor]. It was on such a warming Saturday morning that Derek Millheimer stretched his arms and back, standing beneath those browning fronds [repetition of the dead frond to offer connotations of doom]. Wearing only his underpants, which sagged a little from age and a failing elastic band, he scratched his head, then flicked his pointer finger into his belly button to clean out the lint – which would be politely described as smelling, rather than odorous [develop the odour by crafting metaphors with an olfactory quality]. Middle-age spread had long since taken hold of Derek, and although his head was balding, he found hair seemed to sprout out of every other inch of his [adjective to capture his roundness] body.

‘Oh Derek, go inside’, shouted his well-to-do neighbour, Ms Velma Vanstone [the dissonant V contributing to her characterisation]. The pair had long been in conflict, her well-to-do façade the only reason their dispute had not escalated into riotous war. She would take to the yard and pick up her poodle’s [synonym for poo, which sounds a bit more well-to-do] and toss it over the fence. Derek, in turn, would give out her mailing address all across the internet, and Velma was constantly receiving junk mail and fraudulent letters, which would spill out of her immaculate mailbox; the untidiness of it all leading her to ask her doctor for a new anxiety medication.

It had all started over house colours. Derek has been painting his house a trendy new grey, when the well-to-do woman approached him in a flap – she had just paid a consultant hundreds of dollars to advise her to wrap her house in the exact same colour: [offer a colour name which evokes a sense of awe or jealousy]. She advised him to put down the roller, but of course, he’d already purchased the paint and undercoated most of his home. Ms Velma Vanstone’s cold heart needed no further reason to harden, but now it was stained in a subtle grey hue, with dark trimmings for the roof, and a crisp white door [does it work to mix metaphors – is her heart a stone, or the picture of the house she wanted?]

‘Oh Derek, the Ladies and I are lunching shortly’, [not said, but rather a verb with a sinister quality] Ms Velma Vanstone. Derek waved and smiled and muttered something indiscernible and scratched his head and turned and went back inside [polysyndeton to draw out and build the inevitable response]. Over the fence, he heard the well-to-do women attend Ms Velma Vanstone’s yard and set themselves down around her newly purchased, Tuscan inspired, crisp white dining setting. The setting was shaded by the majestic golden cane palm trees that were peaking over from Derek’s yard, yet the area was open enough to allow the breeze to pass through their gathering. They spoke of polite things and ate cucumber sandwiches and laughed modestly at only the appropriate times and they considered their host masterful as the spread was brought to the table **[the polysyndeton now used to mirror the description of Derek, as not to forget him in this moment of calm]. **

The star of the show was [this will develop into a clever play on words – foreshadowing the climax], however, yet to be presented – it was tradition for Mrs Velma Vanstone to make a two-tiered sponge cake whenever the ladies lunched. It would be iced with white fondant, with a baby blue trimming which gave it a [synonym for well-to-do] appearance that made it look as delicious as it was modest in its finery. As the ladies’ volume slightly turned up in anticipation for the big reveal; [another play on words, I’m enjoying this] Derek understood this was due to the announcement, that Mrs Velma Vanstone would just, ‘duck inside for only a moment’, to retrieve the cake in all its modest finery.

Quite immodestly [juxtaposing Derek against the cake], Derek walked into his backyard playing a small red ukulele. It has been a cheap toy he’d picked up for his son from one of those two dollar stores, but he’d found far more value in the way the plucking of its strings seem to irate his neighbour. Derek plucked [use tricolon to place emphasis on the action] and the polite talking was shredded [metaphor to help craft the war image] by the vibrating sound. Standing only in his sagging underpants, belly protruding from over his failing elastic [deliberate repetition to instantly draw responder back to opening image], Derek waved. And he continued to wave, as he watched a two tier, fondant iced sponge cake, fall to the pavers beneath Ms Velma Vanstone’s falling jaw [should I now conclude with a reference to a falling frond to tie back to the opening image?]