Auction Of The Zahhak || The Ink Well Prompt #57 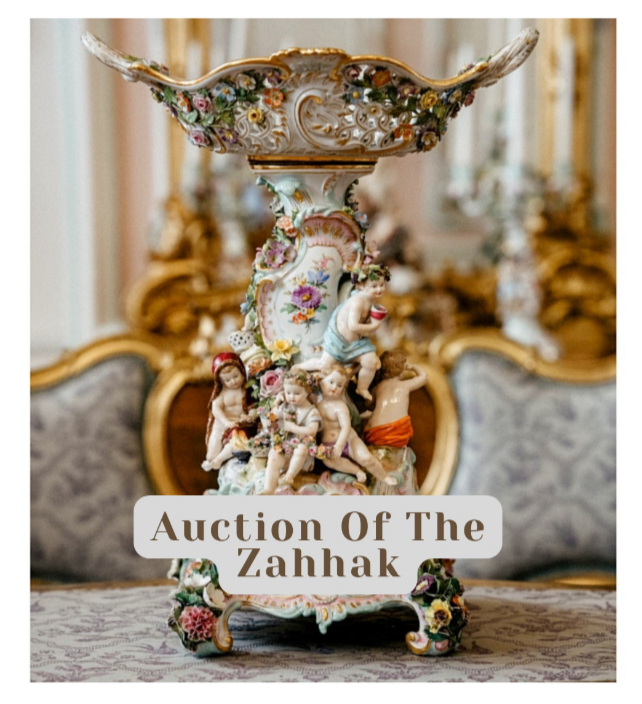 Sleek and shiny black luxury cars drove slowly into the gigantic estate house where precious works of art and valuable artefacts would be auctioned. It was going to be a gathering of the richest people in the city.

One unwritten, yet well-known rule among art dealers, thieves and owners is, once a piece of art is stolen, you lose all rights to it until you somehow acquire it back. I was about to become twice rich for a certain, rare artefact that was stolen from me.

I had my inside man, Griffiths, working as one of the staff for the event. He had given me relevant details and information of all the artefacts billed to be auctioned. All the artefacts were decades old but none as valuable and centuries-old as one rare, exquisitely carved Zahhak. The only artefact everyone wanted tonight.

I smoothly stepped out of a rented Toyota Camry and watched it zoom off. I could feel the odd stares from some of the guests, handsomely dressed, loitering outside the auction hall in pairs. Their motive was none other than to gauge their fellow bidders and guess whose pocket would triumph after the auction.

Some of the ladies patted their perfect hair and turned their noses up. I was clearly not their type. Good. I had to appear inconspicuous tonight, thanks to the fact that I shunned social media and the press most of the time. None of them knew who I was.

I smiled slightly, waved to Davies Corbyn, owner of the largest casino in Las Vegas before striding into the hall. He gave me a quizzical look. I guffawed mentally because Corbyn had boasted he would leave the auction as the new owner of this rare artefact.

"Are you in position?" I whispered to no one in particular as I sat down. The wireless surveillance earplugs in my right ear transmitted my question to Griffith, my man inside the building.

"Got it. Let's give 'em a show," I said without moving my lips as much and smiled satisfactorily.

Gentlemen dressed in expensive, sleek black tuxedos with beautiful women hanging on their arms walked in. Everyone took their seats. The lights blurred a little signalling the commencement of the auction as the auctioneer stood on the podium.

As the pieces were being auctioned off, the atmosphere in the room changed. The wealthy gentlemen and ladies became desperate, trying to outmanoeuvre each other. I quietly excused myself to visit the convenience. When I noticed the security guards were focused on the ongoing auction, I slipped out and entered a room labelled "for staff only".

Griffith, a six-foot, seven hunky young man and my bodyguard, levelled his Glock 9 handgun at the door as I entered. He lowered it. I glanced around the room. Two of the staff had passed out on the floor, the neck of one was bent in an awkward position against the wall. I arched a brow and waved my hand in the direction of the staff on the floor. "Was that necessary?"

"Corbyn's men. They wouldn't leave when they should have. Just a little nap," he smirked. I shook my head, took off my double-breasted tuxedo suit and pulled out a transparent film paper. I stretched it out as Griffith gently took the tiny Zahhak artefact and placed it inside the film paper. I wrapped it and hid it in the inside pocket of my tuxedo.

The auction hall was noisy, people eagerly bidding on an overpriced artefact from Egypt. I quietly took my seat. The auctioneer hit his gavel loudly, "sold to number 49 for five hundred thousand euro. Now to the main event of this evening."

He paused for a moment till he had gotten everyone's attention. "I know you have all been waiting anxiously for this rare and beautiful artefact. There is just one piece of it in the whole world once owned by Majjid Zayed, the richest man in the Arab Emirates… but it somehow disappeared from his possession seven years ago and now it has found its way here …ladies and gentlemen, I present… the Zahhak!"

The hall became quiet as the auctioneer dramatically opened a small, gold-plated mahogany box to reveal the replica of the Zahhak sitting on a small suede cushion. Audible gasps filled the room as everyone gazed at the exquisite artefact in awe. I alone knew it was the replica.

"Ladies, Gentlemen, shall we start the bidding at ten million euros?"

The bidding had risen quickly to one hundred million euros when I stood up and quietly exited the auction house with the original of the artefact in my possession. By the time the new owner discovers it was a replica, I would have crossed the oceans to the Maldives where no one would find me.

After all, I am Majjid Zayed. The artefact was mine first and so would be the final bid sum that the auctioneer had been specifically instructed to wire into my account.

Double-dealing can be very satisfactory.

Photo by: Victoria Pressnitz from Unsplash, edited with Canva