Today my story is about salvaging treasure from a sunken ship, but in order for that salvage to become a reality, a few requirements must be met ......

I have titled the story as: The legend of the sunken galleon come true. 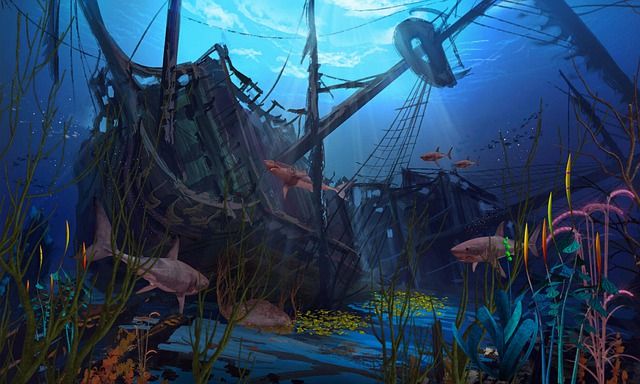 The duration of the project was three years, extendable. Due to the interesting results obtained in the first phase, the project was approved for another 3 consecutive years. During this first phase, the researchers obtained surprising results, among which we can only mention, for now, that a rare type of dolphin, unknown in the scientific world, has the intelligence of a 5 year old child and that its behavior can be used to treat some rare emotional diseases in children. Hence the importance of continuing to advance with this research.

Unfortunately, it is not known if the resources offered for the financing of the second phase of the project will be made available. For this reason, they have to look for money to continue.

To achieve this goal, both the team members and the rest of the Institute's staff propose a meeting for the first Monday morning of April in the conference room.

All weekend the staff would think about how to raise the money and put their proposals in writing. On the appointed day, the first to arrive was Dr. Hansen, the team leader, who together with the secretary opened and set up the conference room. The rest of the staff arrived and settled down, in groups, to discuss the proposals. Afterwards, they had a break. At the end of the break, they continued to decide what had been agreed upon by teams. The agreed alternatives were put in writing; they consisted of the following:

Give talks about dolphins
Seeing dolphins in their natural environment.
Diving with the dolphins
To make verbenas to sell books, books, pamphlets, postcards, cakes, jellies, ornaments, bookmarks, lamps, clothes; in short, everything that could have a dolphin motif.

To carry out all these activities, they decided to divide the work and organize the dates of the events.

They read again what they had agreed upon, but suddenly the secretary Melanie said:

-The hall, attached to the conference room, needs to be cleaned in order to give the lectures-.

To which the gardener Joseph, who is an excellent diver and was also at the meeting, replied:

-That place is full of files containing material, important material, from previous projects. It is supposedly declassified because the information has already been digitized. Nobody wants to clean that place because they are afraid that the spirit of the late Dr. Vinter, who was the pioneer in dolphin research, will appear to them .........

-That's absurd, none of us have seen or felt anything," replies Dr. Gunda.

-I can clean it, but I need other people to help me- and asks:
-Who is willing to work with me?

Joseph and Dr. Jensen, who by that time would be on vacation, sign up.

Joseph, Melanie and Dr. Jensen agreed to clean it little by little and in parts. To do so, they would stay on for some extra time after finishing their regular work at the Institute. That way they would not disturb anyone.

They started on the roof. This was quick. Then they would continue with the files, one by one, because they decided to also review the writings, which were found, just in case there was something important that had not been digitized. There were a lot of files, so they decided to number them for ease of use. Each person would review the same number of files. Time was precious.

They moved the files around so that everyone could work more comfortably. Three days went by and they still had a lot of reading and cleaning to do. The fourth day arrived and as usual, the three of them were gathered together, each one reviewing their respective documents, when bam! the power went out. To make matters worse, it began to rain heavily, which was unusual for the time of year. They hear thunder. Suddenly Melanie trips over something and screams:

-Oh, oh, oh, oh, here passed something over my feet, I don't know what it is.

Unexpectedly, with the flash of lightning, a huge rat is seen running away.

As he jumps, he trips over a couple of folders, which fall to the floor, and the pages inside them get messed up.

Those were the ones that Doctor Jensen was reviewing; so it is up to him to pick them up and organize the material to read it later. As they were already tired, they decided to continue the next day, because they thought they would finish with the few files they had left to arrange. They say goodbye, laughing about the incident, and they say -tomorrow will be our best day- and they leave.

Little did they know that what they said - tomorrow will be our best day - would become reality......

They all arrived at their offices the next day with a strange feeling, that something was going to happen, but they had no idea what it was.

When they went to the living room to clean it, they remembered what had happened the night before, but as they did not see anything strange, they continued with their cleaning work. They should hurry to finish that night.

Doctor Jensen began by reading something that appeared in the fallen folders, it was titled "The Legend of the Galleon". He thought it was very strange to find that kind of article in files that were supposed to contain only scientific material. He was going to throw it in the trash but suddenly he showed it to his colleagues.

Joseph, moved by the title, associated it with the strange feeling of the night before. So he proposed to read it. They all agreed to inquire about the strange article they had found. That way they would know what it was about. The date of the writing was from 1930, but it was perfectly preserved, nobody knows why.

It was an alleged tale of a Spanish galleon, called San Bernardo, sunk in Cartagena del Mar and containing gold and precious stones. They were distracted by that. But it caught their attention that it had exactly the geographical location. So they decided to call the geographer and ask him if that site existed. To which he replied that it did.

Joseph's imagination was blown and he proposed to find out if that galleon was known and if someone had rescued the treasure. The others thought it was a waste of time. But at such insistence they reluctantly approved the proposal.
Surprise! The galleon did exist, but nothing was known about the famous treasure.

To which Melanie adds:

Total bewilderment for everyone! In the last chapter some conditions were established in order to find the treasure:

They were all disappointed.

But the creepiest part was the last part, which said that there was a legend..... Where the spirits of the people who had died in the shipwreck would kill those who tried to take the treasure if the conditions were not met. Here they understood "if the person returned" ........

Just at that moment Cornelio, the Institute's watchman, knocked on the door and told them:

-I heard everything they said. I want to participate in that rescue.
He threatened them saying:

-If I don't do it, I will make known, publicly to the authorities, what you are up to-".

Cornelio, although an excellent worker, was considered an unscrupulous man.
They all looked at each other and said yes.

Joseph goes ahead of the team and warns Cornelius:

-If you're not in early tomorrow morning, you're out of the rescue.
Cornelius thanks him and says goodbye until the next day.

The others ask in amazement:

-Why did you do that? To which Joseph replies:

-It doesn't hurt to try. He agreed. Besides, if it's all a legend, nothing would happen.

-What if it's true," Melanie asks.

The agreed day arrived. Cornelius arrived and proceeded to go through the dimensional portal. But first Joseph gave him all the instructions to find the treasure.

They waited two hours. That was the time the legend said it would take for the person who went through the portal to return. Cornelius did not appear. Five more hours passed and nothing. They all decided to go home.

The next day they arrived at the Institute. The director informed them that Cornelio had been found dead on the beach near the Institute.

Everyone was stunned by the news. Anyway, they finished cleaning and arranging the room for the lectures. But, again Joseph insisted:

-I'll take my chances. I'm going through the dimensional portal. We all meet the first requirement. Besides, I have experience in diving.

The others didn't want to, but when they saw him so confident, they supported him.
So it was done. Two hours passed and nothing. Everyone was anxious, they remembered what the famous legend said........

Finally, when two and a half hours had passed, Joseph appeared all happy. They all hugged Joseph. "He had come back alive."

Joseph told them all euphoric:

-The treasure exists. I know where it is, and with the geographical data we can proceed with the rescue.

They told the Director of the Institute, who requested the necessary permits to carry out the rescue.
Everything went according to plan. After the rescue, the Institute was given a portion of the gold to continue with dolphin research.

Dr. Jansen congratulated Joseph, Melanie and Dr. Jensen for all the work done, to which they replied: