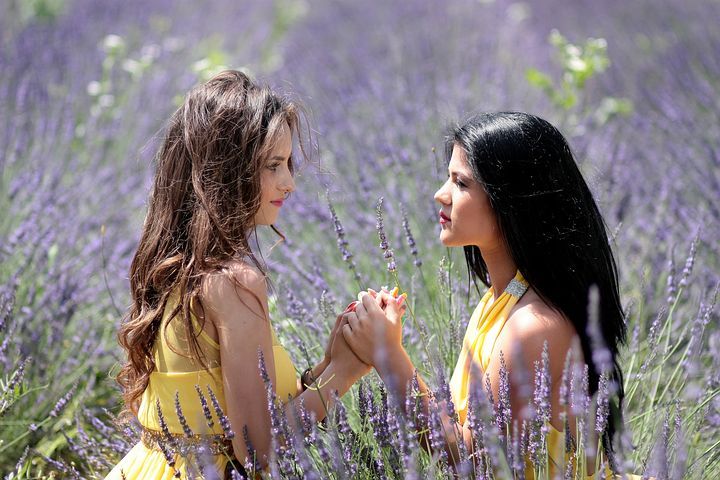 Salome squealed in delight as she saw her friend Cassie, at the door. She has been so bored since the day began. Something about the day put almost everyone in a dull mood. The weather was cloudy, just maybe this was what made everyone gloomy.

Salome and Cassie shared their usual long hug and when they disengaged, Salome led the way to her bedroom and Cassie followed suit. The two friends sat on the bed and started their never lacking girls gist and update. Few minutes later, Salome excused herself to get a drink from the kitchen and Cassie used the moment to look around the room. Though she has been to Sally's house times without number, she never gets tired of admiring Sally's room. It was beautiful, very much beautiful.

Cassie loved the privacy, the neatness, the colours of the paint and bed spray, everything was just lovely. She observed that the shoe rack had three pairs of shoes which weren't there the last time she visited and she figured they were new.
She suddenly began to think of her life and felt sad. Almost all of Cassie's belongings were bought by Cassie. All her life she has worked to achieve everything that she has. Seeing her friend's mum always getting her new clothings, pairs of shoes, deodorants… Even her hair, Salome always goes to the salon and just decides which hair she'll like, she didn't have to worry about money or anything, it was always sorted out for her. Cassie envied her friend.

"Back to earth Cassie!" Shouted Salome. "I've been trying to make you notice my presence since I got back but you were so carried away" she added.
"Sorry, my mind's far away" Cassie said started and feeling a bit embarrassed. "I see your collection of shoes has increased," she added, smiling. "O yes, mum got me new pairs recently" answered Salome. "You're very lucky you know, you always seem to have everything
sorted out for you. Good clothes, varieties of shoes, look at your room, you even have your own TV" Cassie said to her friend.
Salome laughed and responded "please just forget all these. There's nothing really here. It's just a normal thing, they are my parents after all."
"That's what you keep saying but if we switched our lives for once, you'll be more grateful for all you have" Cassie added sadly.
"Really? You think so?" asked Salome, looking serious.
"Do you think I'm joking?" Cassie asked in return.
"We could actually make that work if you really want. I don't like my life but you do so maybe we could switch our souls for two days" said Salome. "Are you kidding me?" Cassie asked, extremely shocked.
Salome explained that someone had taught her how to cast a spell using the magic wand just as it was done in Barbie. Cassie became interested and agreed that they switched their souls.
"How would we get back to our respective bodies afterwards?" Cassie asked.
"You'll come here two days after and we'll sit together and cast the spell again and the switch will happen" Salome said. Cassie looked disturbed, she wondered if anything would go wrong. "It's all good Cass, it will work. I turned a rat to an ant and turned it back to make sure" added Salome. Cassie felt a bit relieved knowing the magic had been tested before.

Salome locked her door firmly and brought down the window blinds. She climbed a chair and reached for a box up her wardrobe. Inside the box was the magic wand, she brought it out and asked Cassie to stand. She drew a circle and they both stepped inside. She asked Cassie to close her eyes and she held her hands firmly. Salome began to chant magic words. "Libidi Labidi booo, Libidi Labidi booo..." Salome chanted on top of her voice nine times. At the end of 10th round, wild fire lit round the circle and they heard whispers of voices saying "done, done, done". Seconds later, the fire ceased.
Quickly, the two girls cleaned up the room and returned everything back to normal. Afterwards, they sat to fill each other in on what happens in each of their houses, the daily routine, just so that none of them will make a mistake and raise suspicions as they are now a different person in the same body and they parted ways.

2 Days Later
Cassie and Salome met in Salome's house and repeated the magic process and switched back to their respective bodies. Afterwards they sat on the bed with each of them wearing a sad face. No one was talking, they both seem to be lost in their own world. After what seemed like eternity, Cassie cleared her throat and began to speak.
"I thought your life was perfect, I wanted to be you so badly. Live in your home, sleep in your comfortable bed, wear expensive perfumes and eat well. But when I got into your body, I saw that your mum doesn't respect your dad and your dad beats her up. I thought your dad was a Christian. Your mum too goes out with older men and comes home late. She maltreats the little girl that you said is here to get formal education as she came from the village. Salome, you don't even have a choice in your home. Your parents insist you study medicine and surgery in school but you don't want to and you've been failing the exams, I don't want that kind of life".

Salome also shared her experience in Cassie's home. Though Cassie's family weren't living a comfortable life, they were united and hardworking. Cassie's dad was a bit hot tempered and verbally abusive to Cassie but that's something that could be worked on. Unlike her dad who beat up her mum and her mum had no respect for him.

"Now I see that no family is perfect, no one is living a perfect life. We all are struggling with something. It's now our duty to learn from our parent's flaws and not emulate their bad side when we grow older" said Cassie

"Yes, I agree. We also have to pray that they see the light and repent from all these ill behaviours" added Salome.

"Come here" said Cassie as she opened her arms and Salome went willingly for a hug. "We will be fine," Cassie added.