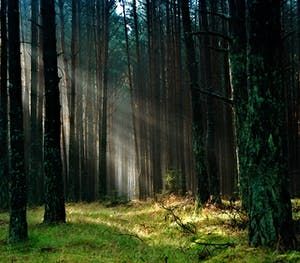 Tiny feet moved one at a time in a flurry, leaves crunching in their wake. The woods came to life as the sun rose, birds chirping, singing harmoniously against the fit of giggles that travelled with the wind.

Amber, a young girl, clad in red silk, raced across the pathway, ebony hair flaring with the summer breeze. Her mirth intensified as she took a giant leap, her legs padding the branches in a skilful manoeuvre. Squirrels scampered; racoons glared at the lass who was causing a stir.

Her laughter came to an abrupt halt with a missed step. Falling unceremoniously, a yelp tore from her throat as she landed ungracefully on the dirt.

With a groan, Amber rises a few moments later, glaring daggers at an enormous wood tree. Its wide, crooked branches were covered with green leaves, although sparse, and its roots were bulgy veins of tentacles that disappeared into the ground.

"Gretchen! What was that for?" Amber asked, feeling wronged.

Laughter boomed in the forest, causing birds and insects to panic into hiding. Slowly but surely, an eye appeared on the body of the tree, a woody blank stare that possessed no irises or scleras.

"Nothing, your highness. Just watching..." The shaky voice came from the tree.

"Watching? You mean watching I fall to my death?" Amber folded her arms against her chest. Her bright violet irises surround by unusual yellowish rings.

"Of course not, your majesty. Besides, you alone are the master of surprises." The voice echoed, light and powerful.

Amber, with an exasperated sigh, turns her back to continue on her way but halts when the tree continues

"Be careful, your majesty. Grunch is still on the hunt, and the blossom is near. You wouldn't want to be caught off guard."

Amber visibly shivered at the mention of Grunch. A puny human whose sole mission is to find her and turn her into a lab rat for his selfish purposes. Before she'd turned eleven, she'd been a human too. Until she began to exhibit uncharacteristic traits at age six; her three-inch scarlet horns, her eyes and tail that only appeared during her distress. She became a cause for alarm, a bad omen that should be executed.

Her people turned on her, and she would have been killed hadn't it been for her guardian, Wayne.

Amber shook her head to clear her memories. It has been over five years, but it still hurts like yesterday. The terrified look on the face of her mother. Mom.

"Your highness?" Gretchen called out warily, feeling the sour mood of the young lass.

"I've told you to stop calling me that. I'm no queen." Amber marched further away from the tree.

"But you are. The only Daredevil to still exist." Gretchen croaked.

Amber ignored the rambles of her most loyal fan, Gretchen, who'd been the eyes and ears in the forest, warning her of coming dangers and making a way out for her escape every time.

Water cascaded down the walls of a cave, shielding its entrance. It met with the flowing river, the sounds of gushing poignant. Erected walls encased the pool of water on one side. On the other, a flower bed grew on the banks. The sun shining above cast light against this mass of perfection as Amber strolled into the open from the cover of the woods.

Stripping to her birthday suit, she dove headfirst into the river. Moments passed before she emerged, her wet hair clinging to the skin of her body.

Amber swam towards the cave only to be stopped by a displeased growl.

"Awwww. Come on. I haven't seen you since forever."

"Why are you so uptight? Don't you know how to swim?" She teased

Silence passed, then a whine before a soft splash. Amber gave a satisfied grin to the black-furred mammal that swarmed toward her. He bared his fangs to her, but it only made her smile more.

"That wasn't so bad, was it?" She enquired, to which it rolled its eyes.

Her laughter carried on as she tortured the old guardian of Wellwayne. Wayne was the oldest animal in the forest and an old pal to one of her kind before they went extinct. She had no idea why the whole forest insisted she was queen, but she felt anything but a queen.

Daredevils were known to be warriors and cousins to the Vampires. That is till war ensued in both camps over who knows what. So she was told by Gretchen. Amber played, ate and learned as was her routine for five years till the sun went down.

A fire crackled, lighting up the dark space where Amber sat, a worn book in hand. Lightning flashed across the sky, taking her attention away from her book. Her eyes narrowed at the sudden change in the weather. Rain wasn't for another three months. What could this be?

Making her way to the cave's opening, a shadow immediately appeared before her, making her scream.

"Wayne! You scared me." She cried

"We have to leave now. Grunch is on his way here. With an army." The blue irises of the wolf-like creature glowed brightly.

Amber paled visibly. Her body trembled as she nodded and shakily got on Wayne's back, tucking her book safe between her legs before lying face front– her chest to his back – and taking two handfuls of fur for grip.

Like always, Wayne led her to safety. She's lost count of how many times she's switched locations, but it is necessary.

Wellwayne is unbelievably enormous, filled with hideaways and secret passages. Lightning flashed once more, followed by the clapping of thunder. Moments later, the gates of heaven opened, and the rain came in torrents, lashing almost painfully at her skin.

It felt like hours, but Wayne continued to sprint in the storm, his movements jolting her body now and then. Trees passed like a blur, and the wind was strong against her. She kept her head down for fear of being swept away.

Just as Wayne slowed, a sharp pain ripped from her stomach to her chest, earning a pained groan from her. Wayne glanced over at her with worry.

"Are you okay?" He asked with a mind link.

"I...I don't– aaagh!" She cried again, and this time, Wayne stopped. She carefully slipped from his back and rolled to the floor, soaking her red in mud.

Wayne's brows furrowed before something caught his attention. The Moon. It was full and...red!

With wide eyes, he turned to the squirming girl again.

"You're blossoming. It's early..." He trailed off.

"What?" Amber gasped as the pain moved to her back. The sounds of bones crushing could be heard. Her tail, a long rope of thick flesh with an arrowed tip, appeared, wiggling freely.

Wayne watched her curiously and yet concerned as Amber's back arched and broke. With a rumble, Wayne sat, lifted his head towards the moon and howled!

When he got his response, a series of howls in return, Wayne laid down and watched as the human he'd rescued years ago took on her complete form of a daredevil.