Image by laineypics from Pixabay 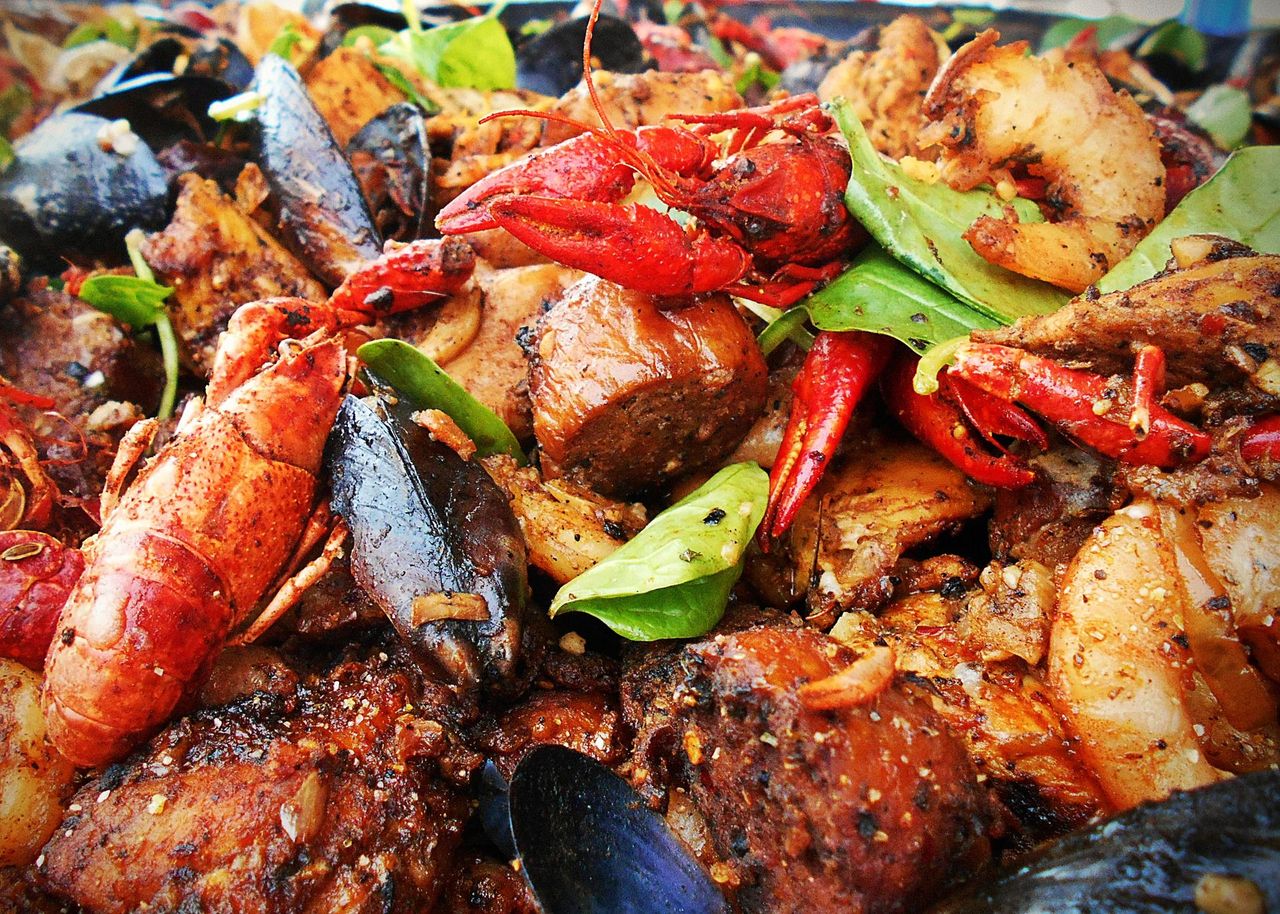 The first sign of the new thing spreading in Lofton County beside Covid-19 was observed by a citizen of Tinyville, VA in May 2020.

“You know,” he said to no one in particular as he removed his mask, “Tinyville smells … different … but … soooooooooooooooooooo good!”

All of the Dubois family members who had worked in Dubois et la Maison before Hurricane Katrina hit had completed their move up to Lofton County, VA, and had single-handedly ended a lot of the foreclosure problems Tinyville had lingering from the financial crisis of 2008. Once they were settled in, they started their work, and the smells of good Creole and Cajun cooking began working its way out of every window, more and more as spring went on.

Jean-Luc Dubois had led his family from their shattered life in the bayous of Louisiana westward around the Gulf of Mexico to Houston, TX, and there the family had started a new business: Dubois Spice Cabinet, which by early 2020 had at last ground its way up to making real money.

But Jean-Luc, his wife, his siblings and their mates, and many of their children and grandchildren still longed to do what they had done for decades … to share love and joy through food with a beloved community. That was the meaning of Dubois at Home, the proper translation … to be able to bring a community into their family home, and love them through through the life they all shared.

At the beginning of 2020, Jean-Luc's eldest son, Jean-Paul, had followed a case he was working to Lofton County and discovered a market for Creole and Cajun food there that was going unaddressed.
This led to the Dubois family beginning their journey to Virginia right at the beginning of the pandemic, only to discover that spring 2020 was an impossible time to open a restaurant in Lofton County.

Even though Virginia and the South were more lax in general on restrictions, that did not extend to Lofton County, owing to the presence of Sheriff John Nottingham. He was so hardened a soul that in his teenage years he had been a cheering spectator in Lofton County's last great outrage against civil rights, the Tinyville Massacre of 1972, and had cheered on every lesser insult since. And then, the county made him sheriff, where he was shrewd enough to hold the line against the full rights of Black people while avoiding the trouble that had overtaken many of his colleagues and their departments in 2019.

John Nottingham had been narrowly re-elected as sheriff for a fifth term in March 2020. Those who shared his opinions – 52.35 percent of the county, at least – turned out to keep him doing what he had been doing. However, the payback for that came sooner than anyone expected.

“Y'all are not about to kill me with this heavy flu like they are dying in New York – I'll shut the county down before that happens! We don't have enough senior White people around here any more as it is, and y'all want to risk us? I'll have y'all under the county jail and your businesses closed first!”

The 68-year-old sheriff had kept his word, setting up the most draconian enforcement stance around Covid-19 in all of Virginia. This led to an oddity of American law enforcement history. Since the Black and Latino communities knew to stay out of the sheriff's way, the vast majority of people who he ruthlessly, regularly broke to his will were White. Only an old German in 1945 who had voted for Hitler in 1933 could empathize with their shock and despair.

No one bucked the dangerous combination of Covid-19 and Sheriff Nottingham … and this, ironically, would be how Lofton County was largely spared the pandemic and was safe for new joy to be spread all the way across, unhindered, through its newest Black power family.

The Dubois family carefully studied the available laws and the enforcement trends and made the appropriate decisions based on their history … before Dubois et la Maison was at home with the Dubois family, they had been on the road with Dubois sur la Route. Jean-Luc Dubois and his wife Ébène-Cerise were pioneers of the food truck movement, so they set up their new business in Virginia around the old model.

On May 14, Dubois sur la Route 1 and 2 arrived along with Dubois et ses Amis, with the food trucks having the English written underneath the French titles. The first two trucks – Dubois on the Road 1 and 2 – were for the business of the business. The third truck – Dubois and Friends – was for joint work with food service partners also adjusting to keep their restaurants alive by hitting the road.

“Sharing is good!” the Dubois patriarch said. “Just like la bonne bouffe, la joie de vivre, Mardi Gras – we are bringing all of it to a county and a world in need! Let the good food, the joy of life, and Fat Tuesday go on and roll down these county roads – laissez les bons temps rouler!”

From May 15, 2020, the smells and tastes of Louisiana's finest food, of Dixieland jazz and zydeco and blues rolling from the trucks, and the cheerful beauty of shades of Blackness throughout the Dubois family (not in the least dampened by their masks) began their journey and began to spread joy, joy that proved more contagious than Covid-19.

Dubois Sur la Route had four major hubs that it served: the Lofton Trust-funded Veteran's Lodge on the outskirts of Fruitland Memorial Park, the Good Neighbors Fellowship in Tinyville, and the Church in the Midst Of Life and First CME Church in Big Loft, VA. That covered the length and breadth of the county.

While gladly providing food for the feeding programs that were addressing more and more demand as other businesses and jobs and thus sources of money shut down, Dubois sur la Route got the attention and partnership of other nonprofits and private actors. This is what kept two out of three trucks always on the road, and sometimes all three, with a fourth and fifth soon purchased to account for a truck or two needing time off for maintenance.

Son Renè, still running Dubois Spice Cabinet out of Houston, had a shrewd if risky idea. He had ramped up production dramatically as the pandemic approached, knowing that he and suppliers were likely to be shut down for several months OR would have to shut down voluntarily to protect his family and friends and workers. But, in May, even with the increased demand, he still had supply and a little more, and so … .

“See if any of your partners are willing to do collaborations with you on fusion Virginia-Louisiana food and buy our spices in bulk – if we have to close down, I'd like to be empty at the end, and business-to-business purchases are more stable and will give me more money in hand to take care of our people here if we go down.”

“Son,” Jean-Luc Dubois said, “this very day our partners have started asking me to do these things, and I was about to call you with the same idea.”

The idea bore interesting fruit, in due time …

“Mardi Gras pizza – with andouille and okra? Ah bon?” Ébène-Cerise Dubois said when presented with it. “We don't really use tomatoes like that, except in some variants of Cajun cooking, and all that cheese … .”

“Oh, please, just try it!” granddaughter Louisa Dubois Chennault said. “Everybody is going to be eating this! Even Virginians who aren't ready for the texture of okra will love it baked out this way with the cheese and the jalapenos – just try it!”

Louisa grinned at her grandmother's surprised smile after she had chewed, swallowed, and considered all the tastes.

“I would never make this,” she said, “but tell Oncle Georges this is very good – très bien.”

“Okay, now that you are warmed up, try this,” Louisa said as her aunt Eugenie handed her a covered tray.

Maman Dubois' nose twitched, and then she cracked up laughing as Louisa revealed the Ragin' Cajun Apple-Smoked Bacon her nose had already told her was there.

“I already know we will not be able to keep that in stock, the way these Anglo-Saxons love bacon and our type of food as well,” Maman Dubois at last said. “Marry them, and it will be l'obsession!”

She was right. Beignets and Ragin' Cajun Bacon became the breakfast to have in Lofton County, provided you were in the circle the Duboises served.

But here was the great part: the people most in need – les miserables, as the term famously went – they were not cut off in Virginia even as Jean-Luc Dubois had never allowed them to be in or around Dubois et la Maison, his restaurant.

Of course, Covid-19 had made les miserables multiply. People who thought they would never be out of work, never be homeless, never be among the poor arrived stunned and broken in poverty in the spring of 2020. Sheriff Nottingham's draconian policy, backed to the hilt by the equally aged and selfish powers-that-be, had indeed shut down everything but the most essential services across most of the county, and Big Loft and Tinyville, although not quite as tight, were far too tight for comfort.

Yet food delivery was essential, and Sheriff Nottingham had fallen to the Ragin' Cajun Bacon obsession anyhow. So, day after day, week after week, the needy across Lofton County could look forward some time in the week to a little piece of Louisiana love, coming with music, food, and smiles so big you could see it in the eyes of those who delivered even with their masks on. Joy remained, even as Covid-19 took so much of everything else away.

And with this, the Dubois family was back in its element again, feeding food and love to the community around them, although not in the way they had intended. But –.

“You have done all things well, my Lord, and my God,” Jean-Luc Dubois prayed one night early in June. “You blessed my family to serve the people to the very last day in our home in our lost bayou community, and in Houston to do what we could as well in our time there. Then, You brought us here, and at first seemed to dash our hopes, only to open doors to us that we could never have seen or thought of! You have done far beyond all we could ask or think, and restored our joy as we havespread joy in our new home – merci beaucoup, merci beaucoup!”

And, as he slipped back into his native French, the tears came, along with Ébène-Cerise Dubois, who thanked God as she wrapped her arms around her husband. She had watched him sacrifice so much … 14 years a sous chef in someone else's restaurant, being subordinate to inferior chefs to keep the family alive, beginning at age 59.

But now, it was all worth it. The food and the family and the good times were on the road again, spreading joy even in the midst of the struggle for the county and the world they were all in. It was not a perfect situation, but –.

“It is enough to know, O God,” Jean-Luc Dubois closed his prayer by saying, “that Your plans are perfect in every way for us, and we thank You.”