My Ideal, My Inspiration, My Bae

He was born to a poor family that was living from hand to mouth. He wanted to get education but his circumstances and the financial situation didn't support him to do so. He couldn't even complete his primary education and was compelled for child labor. He had to build his life from scratches. There wasn't any financial support from anyone. Despite facing so many ups and downs and unfavorable circumstances, I never remember hearing a word of complaint or desperation from him. He moved forward with courage and determination. He faced the hardships of life with tenacity. The hard work made him stronger. The negativities of life made him spiritual and the obstacles gave him faith. If somebody asks me what kind of a man I would like to marry. I wouldn't take a second to reply, "he should have the qualities my father has."

Without any exaggeration, I say, "I haven't seen a single person in my life who has that much faith in his God as he had." Yes, I have met many people who have words of inspiration but they hardly react the way they say. However, my father was different. He didn't say much but his deeds had their own voice. He didn't have to say anything to preach to us; his character was enough to give us guidance and inspiration. I am the witness of his decisions that were expressions of his undoubtful faith. I remember the time when he had to resign from his job due to a conspiracy at his workplace. He didn't have much savings. There was no other source for finances while the expenses were all there. My two brothers were in school; I was in college while my elder brother had to take admission to the university. It was the critically important year for my brother's career and thus his future. For my brother's admission fee, 1 lac rupees had to be submitted the very month my father lost his job. He could say he can't afford his fee but he didn't. He didn't think of what he would be doing after spending his saving on his child. He trusted God that He would help him with the other expenses. he used to say,

“If I spend my money on those who deserve it, I get my pocket filled again from the ways which I cannot even imagine. I get the help from Divine ways”

He submitted my brother's fee without any fear of the future. It is because of his valiant decision that my brother is an Engineer today, and is earning a respectable living.

Despite having limited financial resources, my father gave us the best education and medical facilities. We owe him for everything we have in our lives. I am here and can communicate with the world because of his efforts. If he didn't spend his hard-earned money on my education and didn't get me admitted to an expensive school, I couldn't reach the academic level I did. I am the first girl to reach university among all my cousins. My elder brother was the first computer engineer among all the cousins and the second engineer is my younger brother.

I don't remember him wearing an expensive dress or other accessories, but he never devoid us of any comfort and facility of life. He build a shelter, a home, for us from the earning of his sweat. He worked day and night to provide us with the comforts. He was an electrician. I remember he often went for complaints at people's home after his regular job hours. If he didn't work that hard, we could never get what we have today.

He was such a dependable person who could be trusted even by his rivals. The person might forget if he had said something to him but my father never forgot what he was told to do. He did that at the first opportunity he got to do. He didn’t need to make any special promises for doing things, a simple ‘yes’ from him was equivalent to a promise.

He was not only a great father, husband, son, brother and friend. He was equally good for those who were not in any close relationship with him. I have even found him doing good to those who did serious damage to him. He was a selfless person. He helped so many people in his life without any desire of getting anything back. He only wanted the rewards from his God.

Punctuality was his benchmark. He hated being late or let anyone wait for him. he used to say

Be a few minutes earlier but not late.

Orderliness and organization was the main ingredient of his personality. Whatever he did was with perfection, cleanliness and order. I feel proud in saying that I was his only child (among his four kids) who could work with him matching his standards. He didn't have to tell me what was next in the particular task or how quickly I should perform. I understood what participation he wanted for me. He often took my opinion about various decisions about home decoration like the selection of colour scheme, choice and placement furniture, etc. I remember, once my mother asked him why he doesn't ask his sons about these things. He replied,

because Amber is strong in decision-making. They don't figure out what to choose while she does quickly and firmly.

His words of belief in me are a source of strength for me. Whenever the chips are down, I remind myself of whose daughter I am. Mainting his dignity has ever been the most important thing for me. Being the cause of his pride has always been my aspiration. I have no doubt in saying that my father is my inspiration, my ideal, my BAE (Before Anyone Else).

I have got this 👇 one picture of him in my mobile 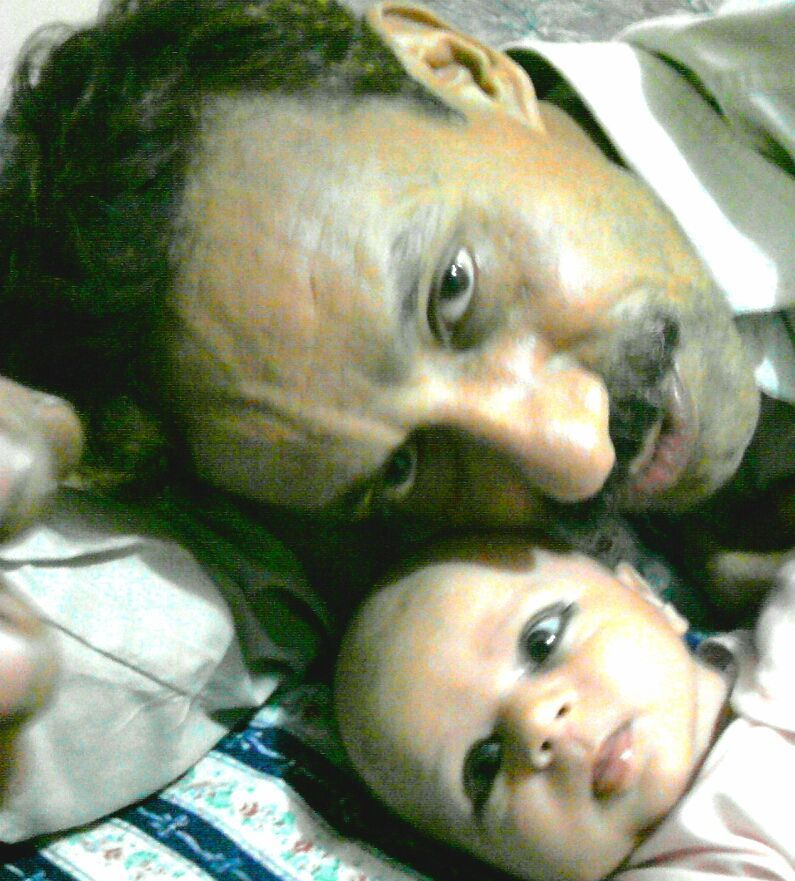 This is my father, lying with my elder son. My younger son couldn't see him. he left us 27 days before Hunain (my younger son) entered our lives. It has been 4 years, 9 months and 10 days since he left this world. He died of an unknown ailment that took his life within three days.