Landrover Diaries: The Series 3 Does Sand Tracks & Meeting New Friends in a Troopy

What a bloody fantastic week. As soon as we finished work on Friday, we jumped in the already packed Series 3 and headed up to the Pink Lakes (more on that later, but I have written about this before - we journeyed there last year) for a few days with my parents. Funnily enough, we ran into Bob, a real Aussie character who used to be a paparazzi in Bondi and had a wealth of crazy larrikin stories to tell us by the campfire. It was hilarious to run into him as we saw him there at the same time last year and neither of us had planned to come, but, you know, COVID.

The nicest thing was that he had been sharing a camp with these two youngsters, who had ushered us into their camp because everywhere else was full. Rainer loved our Series, so was keen to chat to Jamie about it. In their mid 20's, they'd done up their Landcruiser Troop Carrier (a troopy, as they are affectionately known in Australia) to travel Australia, but with the border shut, they were stuck in Victoria and had been in the area since the last lockdown, unable to move. We got along so well (despite being twice their age) and they eventually shyly asked us if they could tag along when we went into the desert for some 4WD tracks. We arranged to meet in a few days time, after hanging out with Mum and Dad, who headed back home to experience the Melbourne earthquake (can't believe we missed this geo event - damn!). After a night spent at Billy Bore campsite, in the Big Desert National Park, we took a track we thought they could cut their teeth on, whilst also having the final destination a petrol station - we only have a small tank and Buttercup sure guzzles the petrol. What we thought was a few hours drive took us all day, and was harder than we thought. At one point Buttercup's accelator pedal stuck on, but a bit of a chat and some WD40 saw it unstick. It sure was heaps of fun trying to get up some pretty big sand dunes. Some needed a bit of a human run up to see what was on the other side, just in case, but before long we'd sussed exactly what to do, including letting the tyres down a helluva lot, which helped us up those dunes no problem! The national park is bloody huge - it's hard to capture the scale of it. It's a lot of scrub, kangaroos, wildflowers, snakes, lizards, birds and sand. September is a great time of year to visit as it's not too hot - in fact, it was bloody freezing most of the time except the two days we were doing sand tracks, which was nice - still not too hot, but nice enough to feel comfortable. The camp we enjoyed on the last night was awesome - basically a clearing just off the track. No cars came past at all - we really were in the middle of nowhere! We had set up camp the night before beside a huge sanddune - the camp was called Snow Drift and the Troopy couple had spent a few weeks there with no one in sight because the whole state was in lockdown. But it was busy with a lot of regional let out, and I was super annoyed when a family came and stole our fire pit. It couldn't be more obvious it was ours as our cars were right up against it, so I was furious. Nevermind - they did us a favour and we found a proper remote spot! Our 270 awning worked a treat, although I was quite jealous of the 30 second awning that the troopy had, with no poles to bother setting up. We might order one and sell the other. Their set up was great and thoroughly planned - they were quite on the ball for a young couple with no travel experience at all. I'd show the set up but they aren't on social media yet and asked us to hold off sharing until they organise an Insta account.

They also had a great camp oven bread recipe which amazed me - we'll be trying it soon! Where to next? Well, home, sadly. Seven days was enough to feel relaxed, especially as we didn't check the news as we had very little reception. Besides, we were pretty tired of sleeping in the back of the Landie and things were getting quite stinky - and my back was killing me. To be honest, Buttercup was freaking awesome and amazed us (I mean, she's fifty!) but I can't wait til we have the more comfortable Defender to travel in! 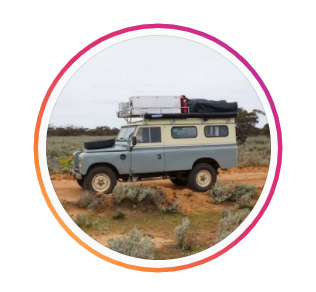 Landrovers in Lockdown
2A Restoration Begins
Front End of the 130 Comes Together at Last
Landrover Club Meet Up Victoria
Sunday Driving in The Great Otways Park
In Which We Buy A Series 2 and a S3 Military
RedNeck in the Australian Bush: A Landover Horror Story!
Buying the 130
Landrover Camper Improvements
Progress on Series 3
Series 3 Restoration Complete
Nut and Bolt Restoration Ending - Series 3
How to Trick Your Wife Into a New Landrover
Series 3 Build Progress
Starting the Rebuild
70th Anniversary at Cooma