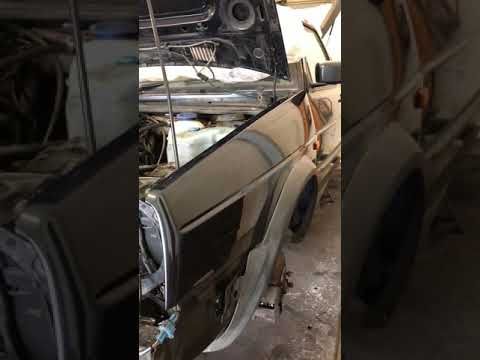 It's time for another update on the Mk2 Golf!

Wings are sprayed and are now fitted - hurrah - and the arches and skirts are ready to be riveted on.

The exhaust has been refitted, with new bolts added to the manifold, and most of the wiring has been accounted for. There are still a few stray wires which need to find a home, but it's looking good.

We actually had a major breakthrough today - for the last few days, the alarm has been arming itself (which is strange as it hadn't worked for about 10 years) and trying to squeak, with hazards flashing, and all types of things...

Initially, we thought that this - and the immobilizer - was causing our biggest challenge, which was the fuel pump not priming. However, we found it was a dodgy relay! Number 67, to be exact.

You could activate it, but you had to put your finger in and push it - we were lucky we didn't get shocked.

And yayyyyyy - the pump burst into life! Which brought in a whole host of new problems, namely, the sieve-like fuel line proved itself to be holier than a doily, meaning poor Paul got soaked in fuel (whoops) However, the fuel did make it to the metering head, one step at a time.

Overall, we are moving forward!