The formula is being written, we just need to follow it.

One thing about the recent success of @splinterlands is that we are seeing the model that is required to take Hive to greater levels. This is no surprise to many since it was what they thought all along.

Layer 2 is where the attraction resides. It is what people sign up for. This is where we find the applications that appeal to different individuals. When looking to grow, this is where the focus should be.

Splinterlands did a terrific job starting to tap into the increased interest in blockchain gaming. The #Play2Earn concept is starting to take hold. This is the core of Web 3.0, a step towards the Metaverse.

The key is positioning Hive at the center of this.

One of the goals, naturally, is to increase the number of users. When there are more people with Hive accounts, the greater the chance of some understanding all that is offered.

This is a characteristic that is valuable to the ecosystem. As one signs on through an application, that person is able to use anything else on here with that same account.

By now, most have seen the chart that @pablopenguin puts out each day. It is being sent around Twitter, showing the impact of Splinterland's recent success on Hive accounts. 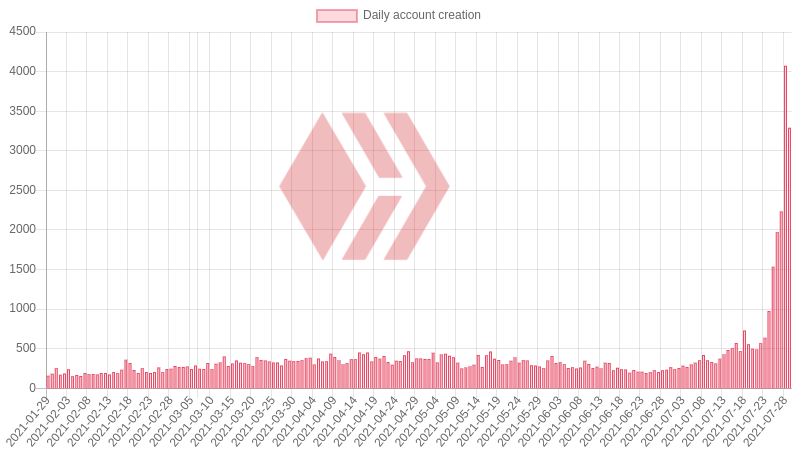 That is quite an increase from the norm that was in place just a week ago. We can see that signups are higher by a multiple of 5 or 6 compared from where it was before.

We can also see an impact upon the activity on Hive. According to Blocktivity, Hive is now number 7 in the rankings of most active chains. More importantly, the volume is up to 2.9 million transactions in a 24 hour period. This reflects what is in reports put out by @dalz and others.

Of course, the validity of a lot of the transactions for a number of the chains is questioned. There were often accusations that a great deal of the volume is generated by gambling bots and things of that nature. We know from the constant study of what is taking place on here that the traffic numbers are due to more activity from Splinterlands.

We can also see this by the issues it caused. Blocktrades put out the weekly update on it's software work explaining this problem along with what was done to solve it.

Yesterday we started getting some reports of timeouts on transactions processed via api.hive.blog. The immediate suspicion, of course, was that this was due to the increased traffic coming from splinterlands servers, which turned out to be the case.

This is all feeding into the entire ecosystem moving forward. Scaling up is essential and "testing" the system out with real traffic is what does it. We believe the optimization work done over the past year and a half allows for great volume on Hive. However, we never know the smaller mishaps that are going to arise until that traffic exists.

As the article linked details, the problem arose and it was a rather simple solution.

Hive has a nice foundation forming. There are a number of projects that are in varying stages of development. The biggest challenge being faced is that it takes time. Coding cannot be rushed. In fact, for a number of reasons, it often takes longer than anticipated. Unexpected problems always seem to arise in that area.

Nevertheless, Hive's path is fairly clear. Splinterlands paved the way, showing everyone what is possible. Now we simply need to develop "10 Splinterlands" on Hive.

While we can expect that game to keep growing, it is important for other tribes, games, and applications to step up their progress. We can now see some of the potential from an overall growth standpoint.

For instance, what would the new account chart look like if we have 5 applications breaking through just like Splinterlands? We could 3-5x the numbers that are on the chart.

The forward progress is more layer 2 applications feeding into Hive. What Splinterlands was able to accomplish came as the result of years of coding, getting feedback from players, slowly growing the user base, and starting to reach outside the ecosystem.

It isn't sexy nor is it an overnight process. Many of the games and applications on Hive are going through the same long-term coding process. Splinterlands is arriving at this time due to the fact it got an earlier start as compared to some others.

We have a nice foundation of applications already operating with more in the works. Many are excited about the potential of the SpkNetwork by the @threespeak team and what can result there. Others are starting to branch out and interest a few people outside of the Hive ecosystem.

That is the power of a decentralized system. We are going in many different directions at the same time. This might make the process a bit longer since there is no cohesive message. However, the tapping into different markets is expanded which has the potential for even greater growth over the long-term.

After all, it was not too long ago the discussion was marketing Hive as a blogging platform. As we can see from the different development taking place, we are far from that. In fact, the lesson here is that a game was the first breakthrough we had. This means that we simply do not know what will click with people. Heck the next one might be the cannabis community. We simply cannot tell.

It is a scratching and clawing time. Very little is coming easy. There is a lot of work required to move the proverbial needle a short distance. Nevertheless, we know what is possible and will keep at it.

Over time, we will develop 10 Splinterlands, all feed traffic into Hive.