Elon Musk to boost Floki like he did Dogecoin. [Tomorrow] If you missed out on Dogecoin, try not miss out on Floki, Elon musk who has really boosted the price value of Dogecoin everytime he tweet about Dogecoin in the past , plans to share and talk about Floki tomorrow and a picture or pictures nobody knows yet,so you what that means for Floki when he does that tomorrow, based on his track record of always boosting Dogecoin everytime he makes a post about it, the price of Floki is expected to skyrocket, but no one is a 100% sure that's what will happen though, we would have to watch and see what happens if it skyrockets or not. And since then Twitter has been on fire, anticipating for the Floki picture and what would happen when he post the picture tomorrow on Twitter. But that's not all the official twitter account for Floki Inu replied saying "👀 👀 👀,Thanks #Dogefather!,The #Floki Vikings will be waiting! ⚔️" 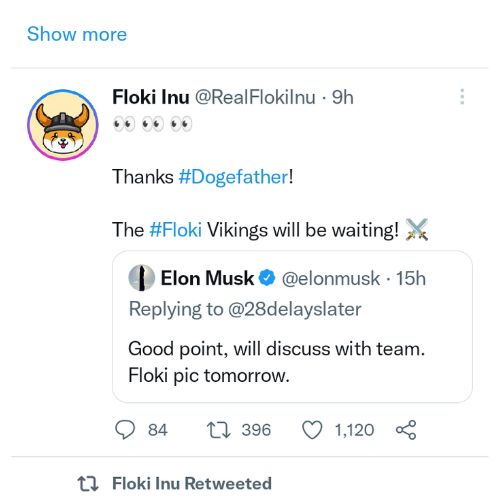 Floki itself has not been doing bad though, since the beginning of Uptober (I don't really know why I like saying Uptober instead of October), it recovered from the dip really fast and almost hit a new ATH, all thanks to Bitcoin Pump on the 1st uptober , yeah I know I did it again. I feel if Elon Musk should make the post about Floki tomorrow, we could see an new ATH and maybe a huge pump on the coin, although some crypto trader's feel Floki is a "rubbish meme coin" , I don't agree with that though but everyone is entitled to their opinion so I can't judge, October has been favourable to all cryptocurrency coins after a brutal September, three(3) good weeks of dip and bear market.