Don't Be Afraid to Say "Penis"

I saw the big bang. The formation of clouds of gas under the influence of gravity, which turned into stars. The birth of planets under the Light of being. How the primeval seas rose and life was born in them… and further… In short, I remember Steemit at the beginning, or almost at the very beginning. And I want to talk about its strangest strangeness.

This is a social network with a reward, with a reward in the form of real money (if someone didn't know, ya). This is one of the top-3 motivators, evolutionarily. If you add sex here and somehow connect it with money, then Facebook will close! Wait a second, there is OnlyFans… nwm.

Newbies don't talk about money here. In the sense why the person came here. Specifically, new users, or users with a low reputation don't do this. For old-timers, this is the open and popular topic, they talk. And I don't remember that a new user saying "dudes, I'm here for money" received this money. But if a newcomer says "I'm here for the sake of light and good", then he will receive money, not guaranteed, but the probability is higher.

I'm not saying it's a bad thing. But it looks like: "small" users, they are like kids at an adult party. They know the word "penis" , but they know that it should not be pronounced in front of adult, otherwise, they will be left without dessert. Adults know that kids know this word and that it's not a bad word. But they will leave the child without dessert, because of rules. 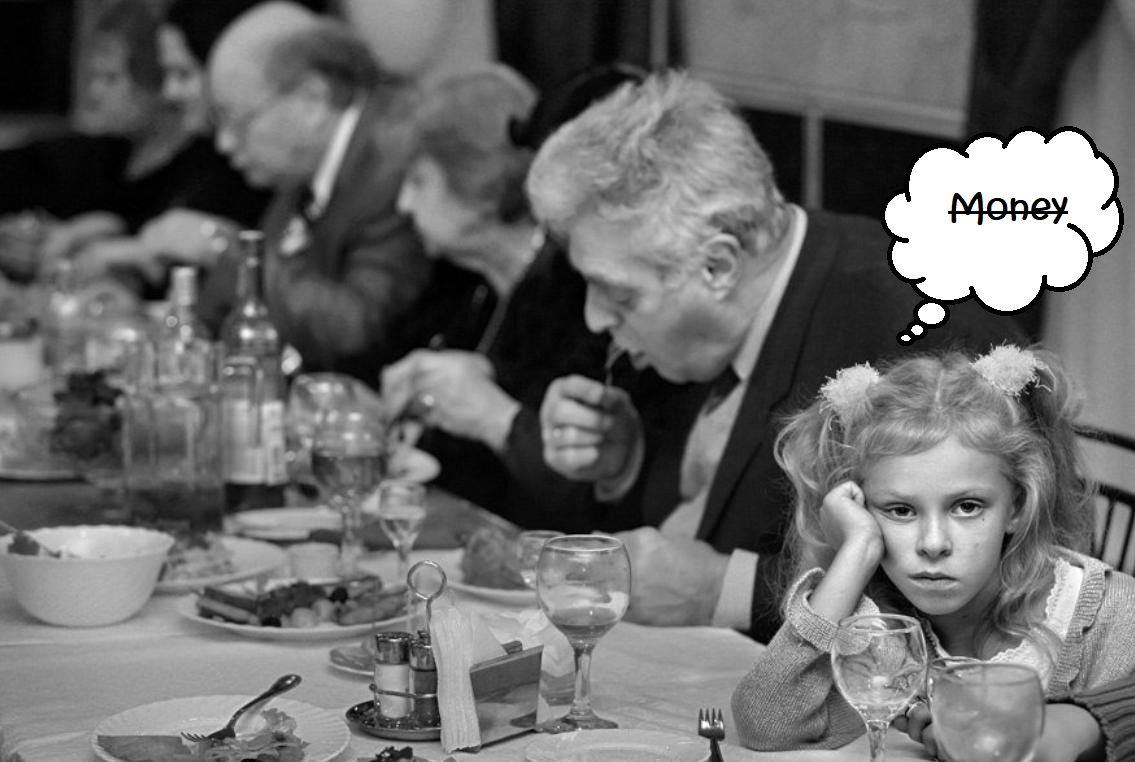 Today you will allow them to talk about the penis, and tomorrow they will start smoking your weed and inserting vodka-soaked tampons into the anus.

It's a bit of a mystery to me why this happens. I mean, why is everyone chasing a positive touch of motivation, and don't mention one of the main non-secret ingredients.

"Hi all, I'm very lonely and I came here to find new friends to become better!..."

Dude, it sounds really strange that you are a 40-year-old man looking for real friends "here", and "there" no one understood you. In this situation, you could not find friends "there", because no one was going to pay you money for communicating with you, and you are not ready to communicate without money. It looks much worse than telling the truth.

Just let's be a little more honest. @demotruk writes correctly that Hive is a job (not for everyone, but for most). If you do something to get paid for it, then usually, it is really called job. If a user would like to post just to be read, there are a bunch of other, more adapted platforms.

This leads to a lot of social moments that look and are perceived very unpleasant. One of them is the increased activity of most minnows towards whales and orcas. Although it’s quite natural. If we continue the analogy with job then this is not a standard employment contract. We are all sellers at the flea market.

“Hey mister! Would you like a couple of phallic figurines made by my one-armed wife under the light of the last candle stub? Today, 2 for the price of 1”

It is quite natural that if a person has completed the work, then he is trying to sell the result of the work to someone who has money. Another question is how the work was done and whether it was useful. Anyway,sometimes it’s perceived as begging and a pursuit of profit. 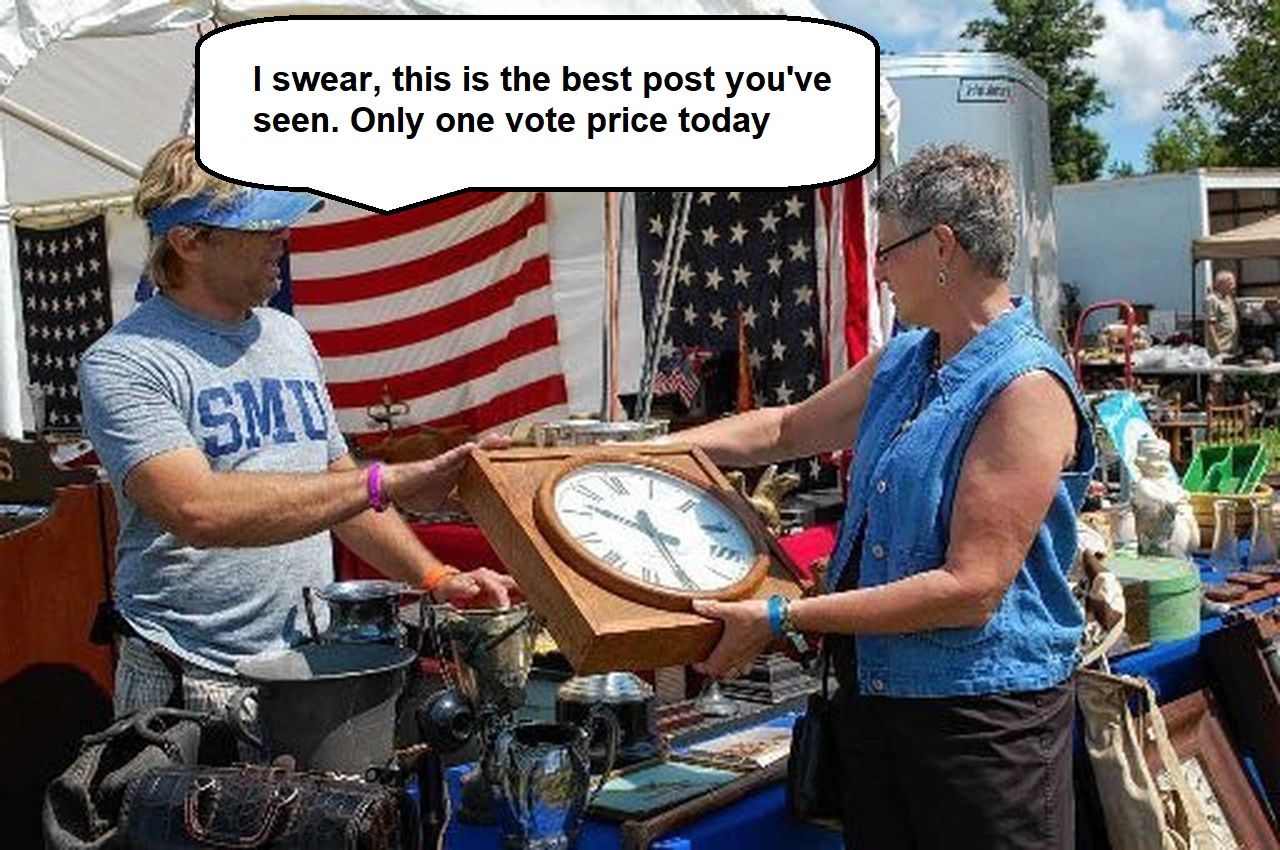 Although, these are just emergent properties that are predictably manifested due to the platform model. And this is not bad, we just have what we have. You can write as much as you like that the main advantage is decentralization, lack of control, freedom of speech and self-regulation. OK, that's great, it's here. But here's a bunch of crypto dollars on the first page. This is what brings many users here, first of all.

Hypothetically. Will be a success the blog of an avid drug addict who writes masterpiece posts about his life? Just imagine, his content is cooler than anything you've ever read. But, at the end of each post, he adds: "I'll spend the money I earned here on another dose of crack." Will he get votes?

Is it worth fighting with this and changing it? Who am I to raise such serious questions. A mother's cousin who comes to his nephew's birthday only once every 3 years, if beer is poured there. This post is not about that, probably .. I don't remember, already had enough beer.

However, @nonameslefttouse said the right thing:

I think the whole concept should die with the ocean. Ever notice how it fucks with peoples heads? We're all just humans on the other side of devices, but because of certain labels, some feel small, some feel big; and it often goes to their heads. "I'm just a tiny fish" sounds so goddamn depressing...

We can go even further. If you don't want to see people fighting for money, just hide your wallets. Let people communicate blindly. Why were the wallets opened? The same story with openness and transparency, probably. Ideology must be supported by actions. So, it should not be surprising now that the employer (or the secured buyer) is visible from afar.

I don’t call anyone for global changes, and my mind is polluted by commercialism, many will say. I can start making excuses that this is the mentality of my people, or my mother hugged me with her legs instead of her hands, and I didn't have enough love. But all I'm trying to say here is simple let's not be afraid to say the word "penis". Especially when we are all sitting here with our pants unbuttoned, and no one has even put on panties.

UPD: Shooot... dear @khaleelkazi I was not going to publish this post in your community. It thematically doesn't meet any of your requirements. I'm too old and I'm pushing the wrong buttons. I am ready to be punished.