Who Should We Get To Shill for Layer 2? 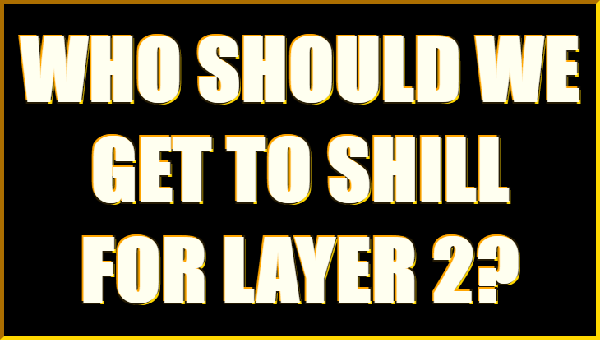 Who Should We Get To Shill for Layer 2? That's a good question. Despite the fact that Hive is superior to many blockchains and platforms in the world of cryptocurrency, the reality is that it flies under the radar. This isn't necessarily a bad thing. Much is happening behind the scenes, espcially with SPK Network and #ProjectBlank. Hive and LeoFinance can keep BUIDLing the infrastructure for Web 3.0 so that when the rest of the world discovers Hive we can tell people "Welcome to the party!"

As much as we want high-powered celebrities and big-time influencers to shill for Hive, this question just as important to ask: Who Should We Get To Shill for Layer 2?

So while Hive does what Hive does and LeoFinance advances, Web 2.0 gets to benefit from celebrities and other influencers who shill for them. Shilling is neither good nor bad; it's just another term for marketing, and we all know how important marketing is. Certain USD billionaires and loads of entertainers shill for Dogecoin (even if they don't want to admit that outright). Mark Cuban doesn't so much shill for Polygon as put his money where his mouth is. When Ethereum has Vitalik Buterin, does it really need anyone else to shill for it? Meanwhile, Dave Portnoy is perhaps the most famous celebrity to shill for SafeMoon. You get the idea.

More Than One Way To Market Hive

About a month ago, @acesontop published this post about social media and the changes it's undergoing:

Essentially, "@"acesontop is saying that when the big names in social media talk about incorporating blockchain technology into their networds and platforms, they are really trying to do what Hive has been doing all this time. These Web 2.0 services make it sound as if they made a breakthrough, but in fact they are re-inventing Hive in their own image. In the end, they each want their own centralized Hive. Hive is Hive, and centralizing Hive kills Hive and all it represents.

This presents Hive with an opportunity to distinguish itself inthe public eye by showing the world what a decentralized social media platform really looks like. Others exist, and they may even have a larger reach than Hive. But none has the depth and breadth of uses and options Hive has and-- even more importantly-- will have thanks to constant development of projects in the pipeline.

Why the Focus on Layer 2?

At some point during Summer 2021 Splinterlands took off with increased activity, and it's been carrying Hive on its back since then. Many new players went directly to the game to play it. They see themselves as Splinterlands players.

While a Hive account is required in order to play Splinterlands, how many of these new players even know what Hive is? Some know, some don't, and it doesn't matter. Eventually they will discover Hive social media, especially if they want to post about their exploits and lessons learned from playing Splinterlands.

Some people are just wired to think of themselves as users of the dApp where they spend the most time, and that's OK. Hive will be there waiting for them when they discover what else lets them use their Hive account.

Just as Hive has its main blockchain and sidechains for Layer 2 tokens, perhaps the marketing efforts need to be done in tracks or layers as well:

Track 2 is always available; it just requires initiative from us Hivers (not just the hard-core group which does the heavy lefting [sic] all the time).

Finding shillers for Hive (HIVE) is already a challenge. Much has been written on this.

Depending on who you are, finding shillers for your favorite Layer 2 tokens may be more difficult, or it may be easier to accomplish. Both positions are equally valid, and that's why we're reading this post.

While Hive Engine lists well over 400 Layer 2 tokens (and the listings are updated and pruned constantly), a number seem to be well-suited for promotion by shillers.

Below is a table I compiled based on my review of the Layer 2 tokens at Hive Engine. I list the layer 2 token along with my guess on who should shill for it. This list is by no means complete, and my choices are admittedly limited.

Some of my choices are a natural fit. Others may be head scratchers. A few may need to be deciphered by Dennis Miller.

There are very likely layer 2 tokens I left out, and that's because I'm not familiar with them. If your favorite Layer 2 token isn't listed and you can name a shiller or more for it, feel free to comment with your token and shiller(s). With enough comments containing additions, an updated table will be presented in a future post. Maybe this can be an ongoing project? Who knows? What other Layer 2 tokens need to be listed, an who should shill for them?

UPDATE: Repost due to technical difficulties.