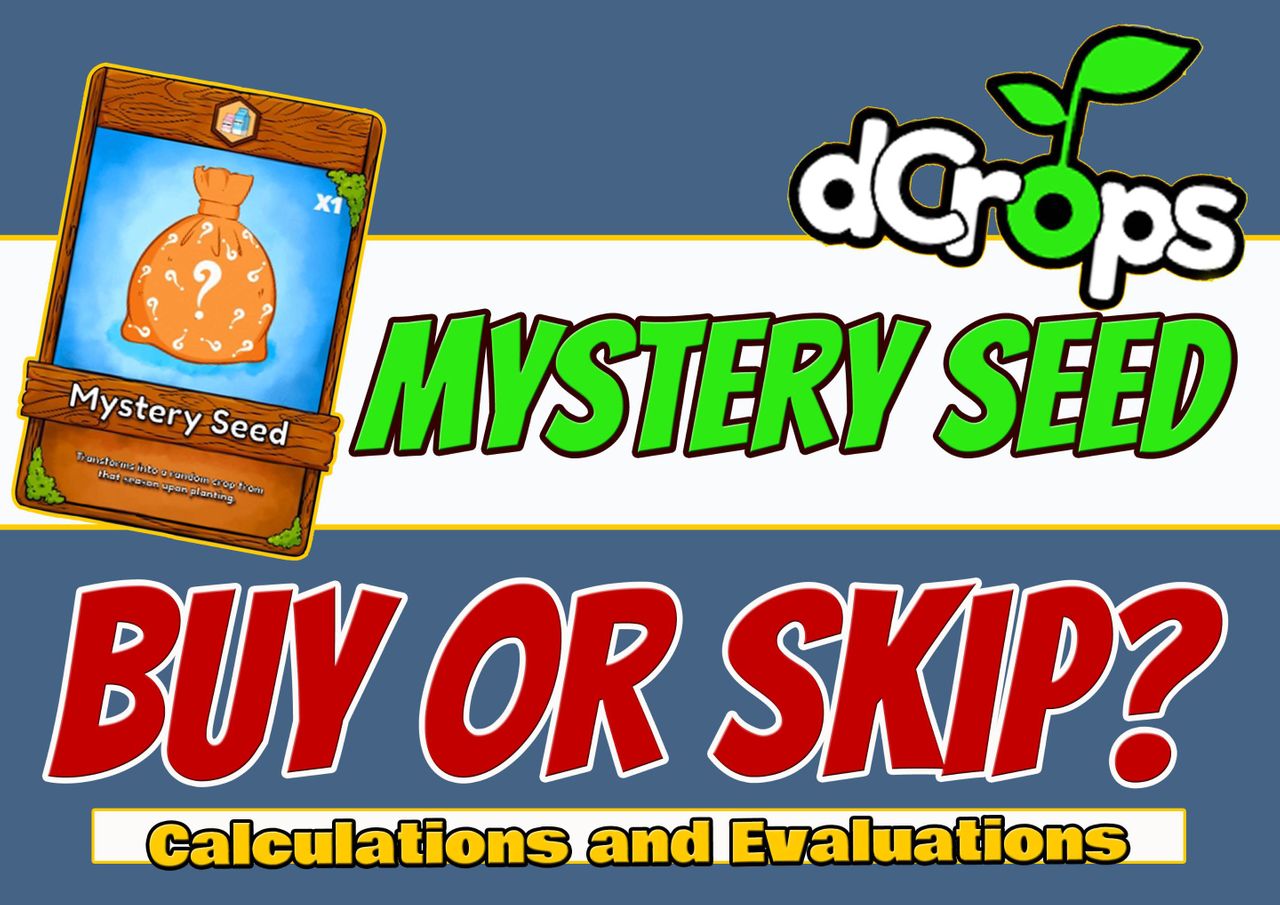 DCROPS and the Mystery Seed: Buy or Skip?

Dcrops is a farming game built and developed on the Hive blockchain.
The points of strength of Dcrops in my opinion are two: 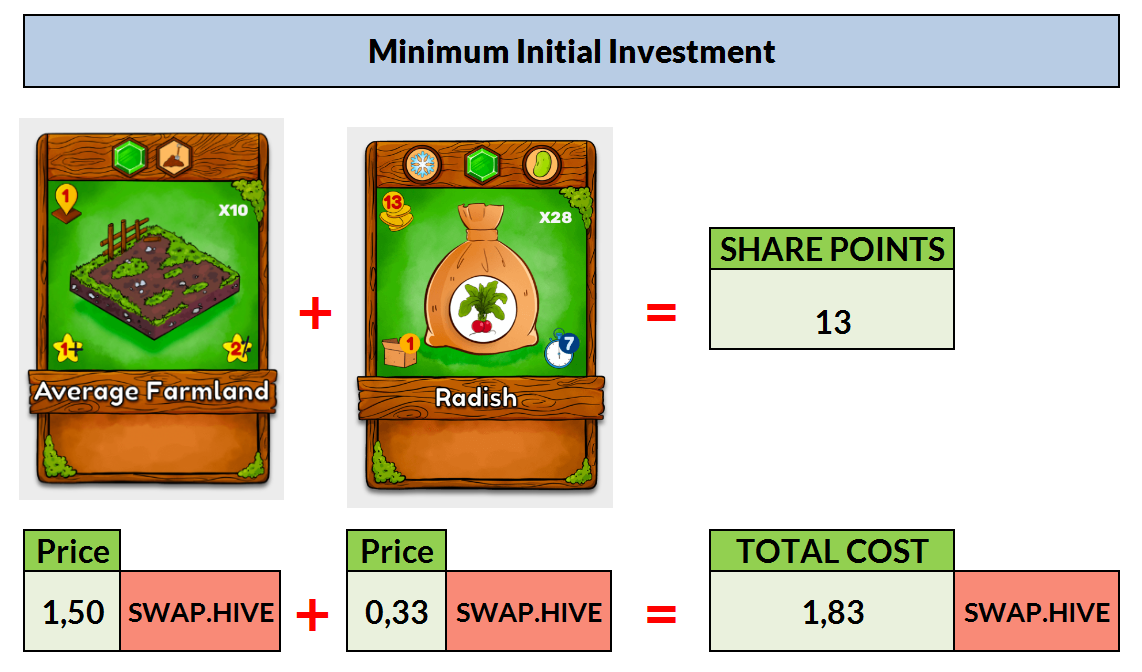 If you are not familiar with the game of Dcrops you can read a post I wrote on October 26, 2021 where you will find: After this brief introduction about Dcrops I can move on to the main topic of my post today which is an evaluation of the Booster Mystery Seed item.

I've often received requests for advice regarding the game of Dcrops in the comments to my posts on Dcrops or on Discord, and today I want to answer a question I received some time ago which is as follows:

Is it convenient to buy Mystery Seed from the Shop section of Dcrops? 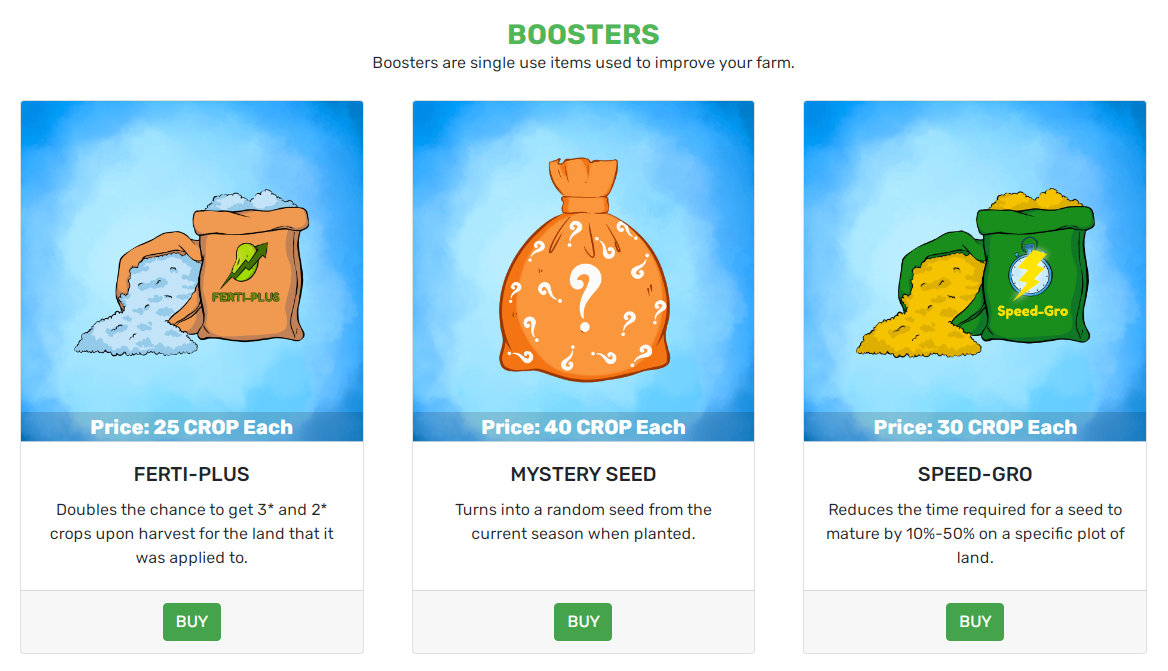 To answer this question it is necessary to do some calculations but first let me show you what Boosters are and what they are used for.

Boosters are consumable elements in the game of Dcrops because they can only be used once.
Boosters come in three types:

The Booster Ferti-Plus affects a Land card and allows you to double the probability of getting higher rarity crops (2 and 3 stars) at harvest time.

The Booster Speed-Gro applies to a specific plot of a Land and allows you to reduce the production time of a NFT of Seed type by a variable reduction: from 10% to 50%.

The Booster Mystery Seed can be used in a plot of a Land and is transformed into a Seed-type NFT.
The resulting NFT will be:

There are two ways to get a Mystery Seed Booster:

To understand whether buying a Booster is convenient or not it is necessary to give a value to the Booster before buying it.

In particular, to give a value to a Mystery Seed you need to know the following values:

The final step is to calculate the value of the advantage obtained by using a Booster.

The Mystery Seed has a purchase cost of 40 CROP tokens.

In the following image you can see the Candlestick chart of the CROP tokens that I took from TribalDex (https://tribaldex.com/trade/CROP)

Let's start by analyzing the most probable use case (75%).
Using a Mystery Seed will allow you to get 3 out of 4 times an NFT of type common seed.

In the current season of Dcrops there are only two common Seed type cards that can be used:

As you can see from the data in the table below:

Consider the case where the Mystery Seed turns into an NFT Peas which has a higher Shares point production (15) than the NFT Radish (13).
In the luckiest case (highly improbable) an NFT Peas will produce a total of 24 Shares points:

The question to answer now is the following:

To answer I must first calculate the value of a point Shares and to do so I must consider and analyze the reward that I have obtained in the season just ended.
As you can see from the data in the following image in the previous season I scored a total of 527 Shares points which allowed me to get 382,061 CROP tokens from my placement in the seasonal leaderboard.

My previous calculation is very optimistic because if I plant 1 NFT of type Peas producing 5 crops each crop will have:

This means that it is much more probable that a Mystery Seed that turns into an NFT Peas will produce: 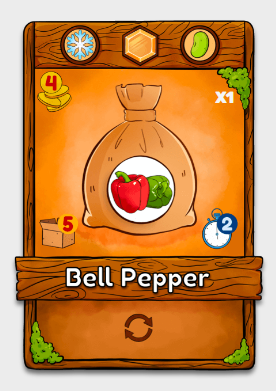 As you can see from the data in the table below an NFT Bell Pepper will produce in the worst case 140 Shares points (all 1 star crops). 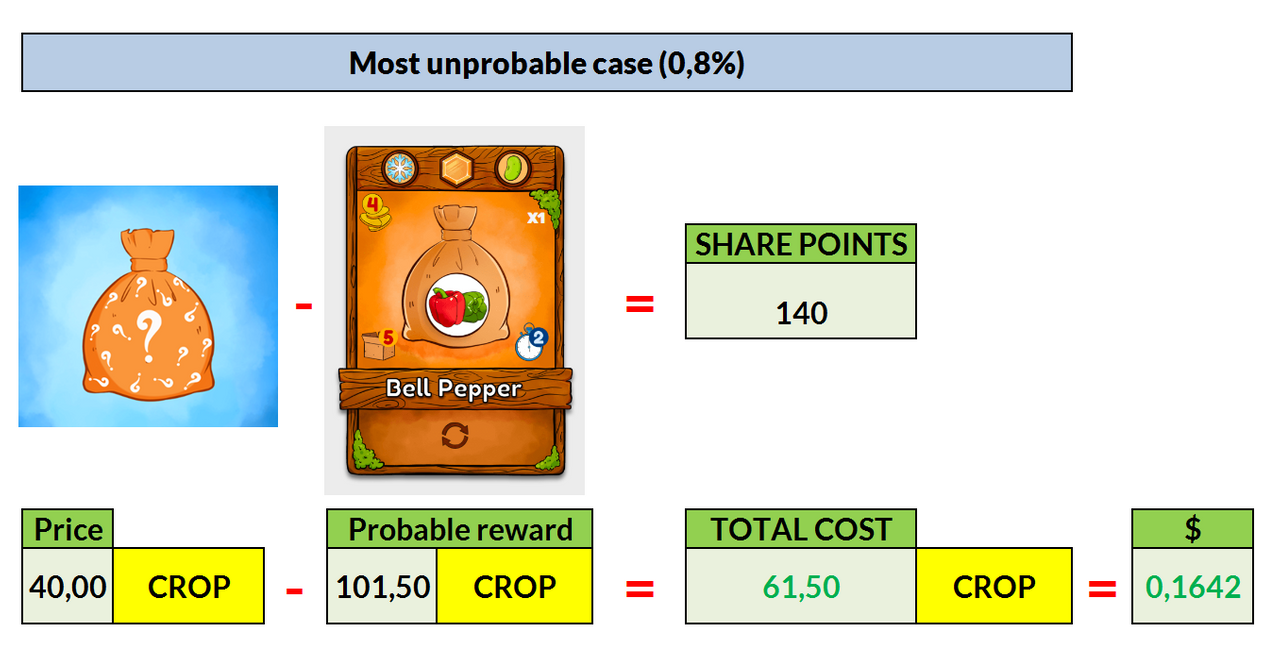 In summary buying a Mystery Seed Booster is in my opinion a wrong choice because in the current season:

The Mystery Seed Booster is a very useful item in the game of Dcrops but the best way to try to get it is for free by completing Quests. 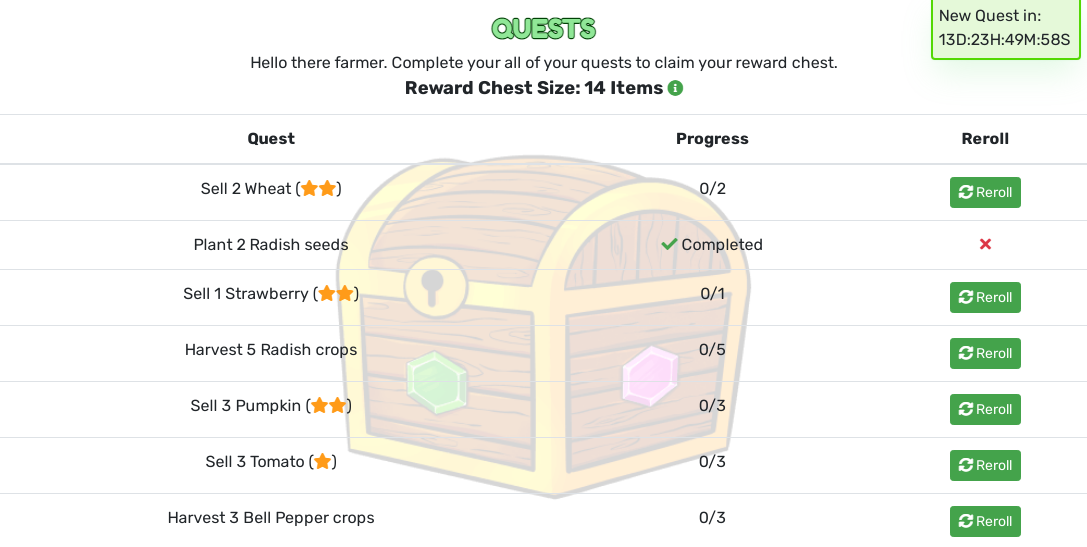 I hope you've liked this post and if you have a topic you'd like to discuss or a financial evaluation of an aspect of the Dcrops game that you'd like me to cover in a future post, write to me in the comments ;)

Dcrops more than a game is an investment and mainly as such should be considered.
In every kind of investment there is always a risk factor to evaluate and consider.
I am not a financial advisor and my post does not want to be in any way an invitation to invest on Dcrops but it is just the analysis of an element of the game and / or sharing my personal investment on Dcrops.

Unless otherwise indicated, the images in this post are screenshots taken from the sites:
https://www.dcrops.com/
https://tribaldex.com/
Images containing calculations, tables and formulas are my property
The font used in the images related to the calculations and in the images edited by me is Open Source