@Nealmcspadden and I (@khaleelkazi) recently had a Zoom call with a company that does AI content strategies. This company works with pretty large players in a wide range of industries.

On the call, they gave us a rundown of the opportunities they see for LeoFinance.io.

Our goal with LeoFinance is to create a vibrant platform for crypto & finance content creators and consumers. To have amazing content and fulfill that coveted goal of becoming "the homepage of crypto".

During the call, I was impressed with the ideas they had for LeoFinance. Clearly, they know the content and SEO ranking game better than we do.

In this post, I'll run through a few of the ideas they had for us as a platform and also discuss the possibility of working with them more closely. They're essentially a new-age marketing agency for content platforms and this could be a major opportunity for LeoFinance to step up our ability to rank on every imaginable keyword for crypto content.

There are some in our community who are well-versed in the SEO and content marketing field. I'm interested in hearing everyones' opinions on the ideas outlined in this post and get some feedback as to whether this would be a worthwhile move. This is not a cheap integration, but the potential payoff would be a massive evergreen content library that would draw eyeballs and new signups to our site for the years to come.

In short, it would take LeoFinance from being a community for content creation to being a powerhouse for targeted content that is backed by AI research to discover the best topics and how to format our content to rank on search engines.

This tool has a feature which takes an inventory of all the content on LeoFinance.io. By doing this, it discovers possible holes in our content web. It also exposes opportunities that we aren't fully capitalizing on.

This screenshot shows a very simple example of this. Their team gave us a demo of a few of the core features that we'll discuss in this post and this screenshot shows an inventory of some of the top ranking pages on LeoFinance that have a great deal of opportunity to be optimized.

The first is "andrei jikh portfolio" and is actually a 3speak video that was posted by @schubes which turns out to be one of the highest ranking pages for leofinance on the Google search engine. This page is driving massive traffic to LeoFinance and this tool is telling us that we have a lot more opportunity here that we aren't leveraging. 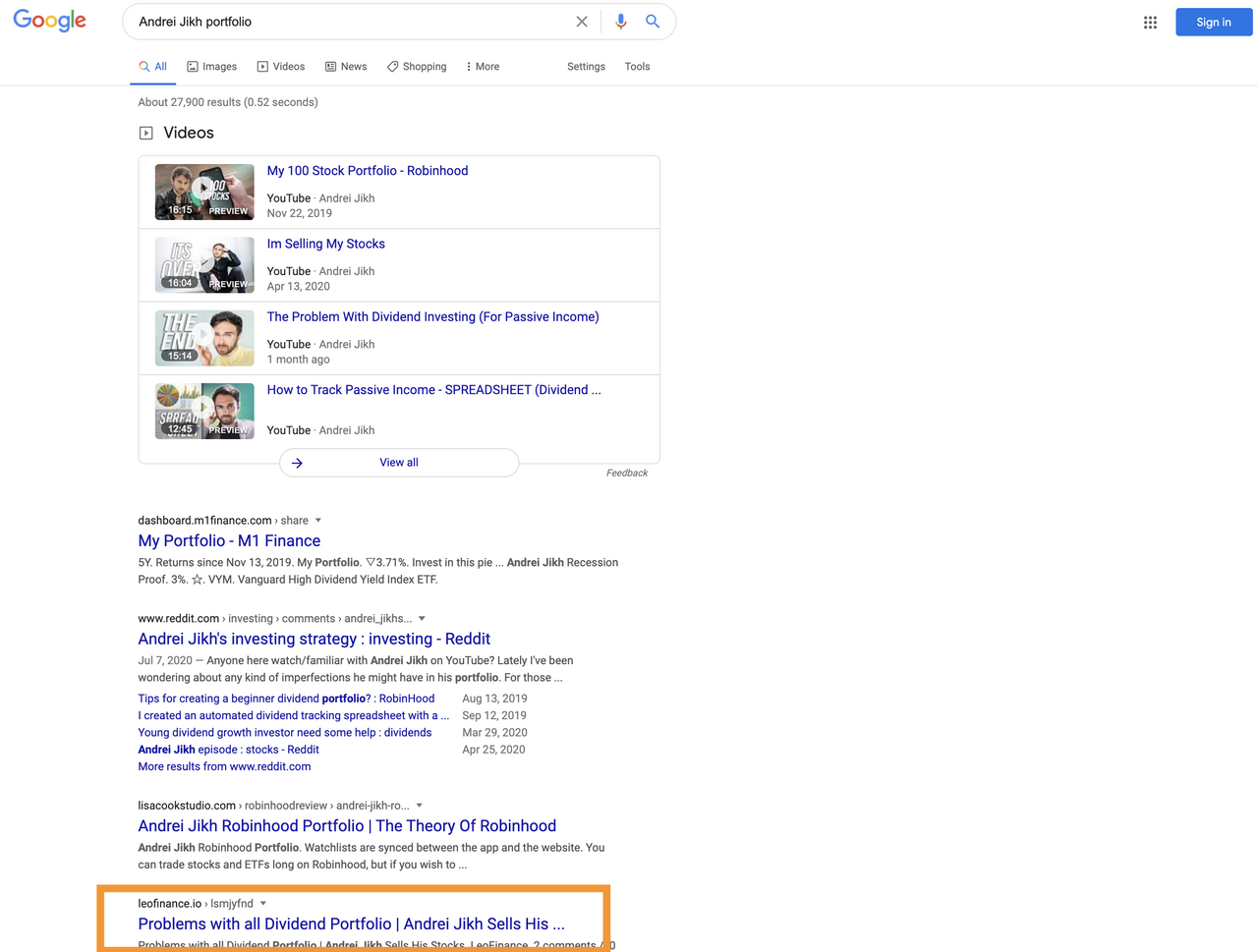 Use Case - the general use case is that we'll see - in real-time - which pieces of content are doign well and which aren't. We'll gain deep insight into how we can optimize the content that is doing well but has opportunity to do even better. Schubes, for example, could go in and edit his post to optimize it even further based on the data collected by the AI inventory tool.

This also points out topics that should be written about more heavily. For the @schubes example, he or others in the LeoFinance community could see that there is underleveraged opportunity for the above keyword and then write more posts about this topic so that LeoFinance gains even more authority surrounding it on Google.

The next tool is the same as above but instead of just creating an inventory of our own leofinance.io content, we actually pick a competitor and inventory their content.

During the call, this was described as "finding the flaws in your competition". We would be able to see the missing pieces in the content webs of news outlets like Cointelegraph and CD and then create massive quantities of posts that are designed to outrank them on search engines.

The value of this is that continually doing this will improve our authority in comparison to Coindesk and CT. I don't think this needs any further selling from my end - if this strategy is successful, then the value of ranking alongside or even above CT and CD on search engines would result in massive traffic, ad revenue and new user signups for LeoFinance for the long-haul.

We've been demo'ing the tools from this company and @nealmcspadden's favorite is the content optimizer tool.

This tool is a writing UI that allows you to plug in a broad topic and then it scrapes the internet and looks for content that is ranking well for that topic. It then compiles that info and then gives you recommendations to not only rank well, but also generate ideas and subtopics for your post.

You can see a real example of me using this tool to create a piece of content. Earlier this month, I wrote a post titled: Square's Cash App Reports Record Breaking Bitcoin Revenues in Q3 and BTC Treasury Position up $25mm.

This was specifically created to target keywords on google for Square's Cash App and specifically how Bitcoin impacts their quarterly revenue. 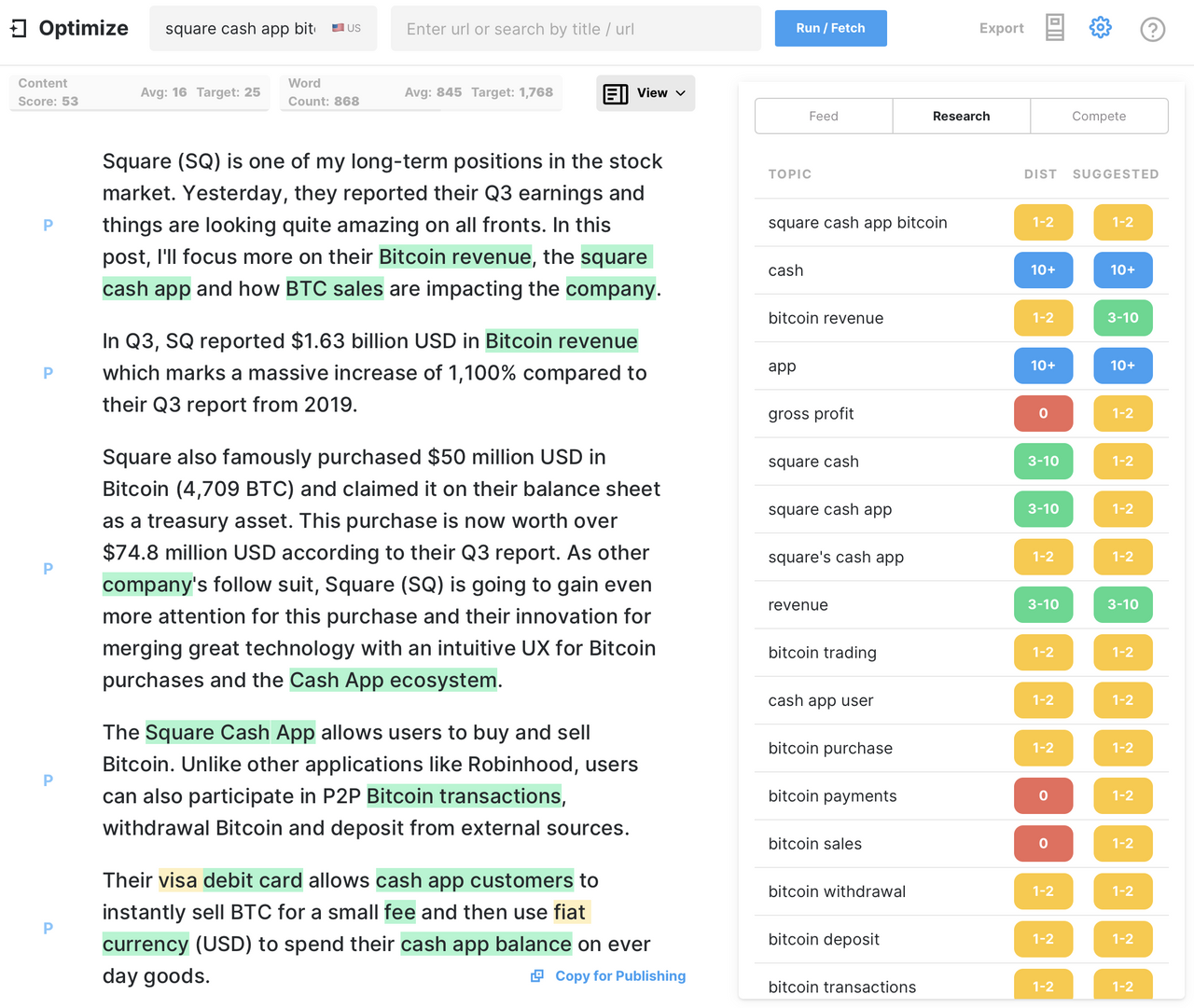 Everything down to the length of the post, the wording, the general topics I discussed, etc. was generated by AI and recommended as the best way to rank the post on Google.

What I Learned From Using this Tool

I started with a broad topic: square cash app bitcoin. Then the tool took me through several other related subtopics that I could talk about related to my broad topic. It helped me craft a post and do some research. In fact, I actually felt like I learned a thing or two about Square and their cash app because I was led down a few different rabbit holes thanks to the keyword recommendations that I wouldn't have otherwise gone down.

Use Case: The use case for this tool is pretty interesting. You need to login to their app in order to access the tool so we would generate logins for the most consistent authors on LeoFinance who want to utilize it. These users would then be able to login and optimize their content.

This might take a little extra time when publishing posts, but as I said - it's not only a great way to benefit LeoFinance's ranking purposes, it's also a great way to generate ideas to write about.

We're considering a few ways to actually increase the rewards for authors who consistently take the extra effort to optimize their content. I think we have 30-50 authors who are more than willing to do this just for the benefit of LeoFinance as a platform. They own LEO tokens and they see the value in contributing as much as possible. I think LeoFinance is ultra unique in this way. Our community is our lifeblood.

Outside of that, we can also use curation stake to upvote users who optimize their content. Bringing more awareness and rewards on the LeoFinance.io platform. Optimizing your content should be a badge of honor that you wear each time you publish a piece of great content that is designed to benefit LeoFinance in the long run (which gives me an idea. Maybe we'll actually add a badge to the UI next to authors who optimize their content).

Since our platform is based around User-Generated Content (UGC), their team focused on "Content Briefs" as being our #1 opportunity.

I relate content briefs to being somewhat akin to a newsroom where you've got an editor who comes up with topics to cover and then delegates those topics to his writers.

Instead, we'll use AI to generate those topics that are particularly relevant in the moment and then we'll open that report up to the community of authors on leofinance.io. 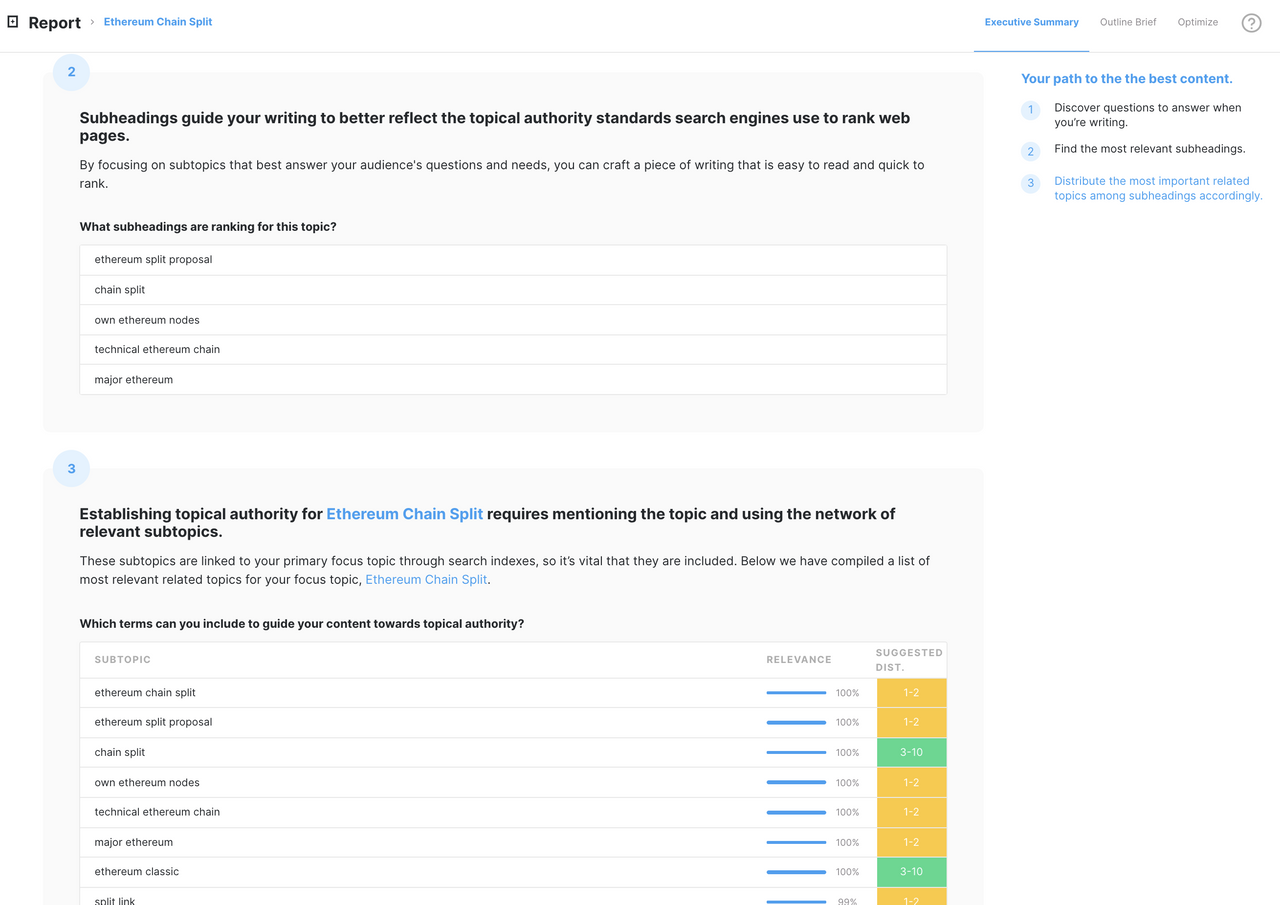 At the time of the call, the topic of the day was the ETH chain split. This call took place on the day that WLEO relaunched and you probably remember that ETH had a chain split the day before and everyone was talking about the Infura API nodes, how the chain split, what it meant, why gas fees were high etc.

The AI content brief tool picked up on these subtopics and crafted a brief that pointed out all of the opportunities that could be leveraged around this idea.

The authors can then take that content brief report and then create their content using it. The report details everything an author needs to craft a well-informed post around the topic that is trending in the moment. They gave us an example content brief which we can utilize as a test.

Use Case - As mentioned above, the unique thing about LeoFinance as compared to most blogs/content platforms is that we're based around UGC. The community and crowd mind generates massive quantities of content.

It's almost like having a staff of full-time writers who are self-motivated by also having ownership (LEO stake) in the business itself.

These content briefs would be released by @leofinance on a regular basis and we would increase the rewards for authors who created content around these briefs. Think of it almost like ongoing writing contests on AI steroids.

Authors can pick topics that they have an interest in and then utilize the brief + optimize tool to craft the perfect piece of content that ranks well on search engines. This will generate massive amounts of traffic that benefit LeoFinance.io immensely in the long run. More traffic = more potential signups = more ad revenue = more LEO burned = 🔄

There are more tools offered - like deep research briefs and more. This post outlined the core opportunities that their team discovered when looking into LeoFinance.io and our business model. Please give your feedback below.

For the sake of full transparency - the package they tailored for us is $18k USD per year. Not a small number, but one that is on par with other investments I've made into various aspects of the project such as the LeoFinance apps. Why invest in building a great app if you don't also invest something into bringing new users to it?

If this content marketing strategy lives up to the expectations they set around what kind of traffic/new users we'd generate, then I know that this investment is 100% worth it. The question is if it will work the way that they say it will work.

Their response to that is that it is up to us and our community. If our community leverages the tools, reports and insights that we gain from this, then we are going to increase the authority of LeoFinance and rank incredibly high on search engines for crypto & finance keywords. We'll create an evergreen library of content that is optimized to draw in attention.

Many on the LeoFinance Growth Team (our private room on Discord) know that I've been reaching out to dozens of crypto companies and influencers to inquiry about ads on their platforms. Paid marketing is one of the next major steps for LeoFinance as a platform, but we want to do it in an intelligent way. To me, this $18k is an investment into long-term marketing.

We likely won't see the results right off the bat, but if it turns out to be successful, LeoFinance will reap the rewards for the years to come as we generate massive amounts of content that rank well and draw in new potential users, LEO investors and readers in general.

This is an investment that I am more than willing to make, but I still would like to hear from the community to get a general sense of who would be willing to step up their content game and participate in making LeoFinance the homepage of crypto.

Please leave your feedback below 🦁